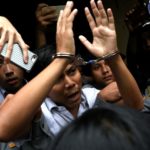 3 Sep 2018 – Two reporters for the Reuters news agency were each sentenced to seven years in prison by a Myanmar court today for possession of state secrets, a disquieting end to a trial that has lasted more than eight months and brought international censure upon the government of Nobel laureate Aung San Suu Kyi.

11 Mar 2015 – The European Union last night defended itself against allegations of complicity in police brutality following a violent crackdown on students. The EU has been training Myanmar’s police in crowd management and riot control since 2013 following requests from Daw Aung San Suu Kyi and the government.