Malaysia Flight Riddle: How Can a Passenger Plane Go Missing in the Age of Universal Surveillance? 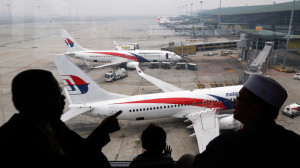 21 Mar 2014 – Debris about 79 feet long has been spotted off the coast of Australia. Whether it belongs to missing Flight MH370 remains a mystery so far.

In the post-9/11 world, a jetliner with 239 people on board cannot simply “disappear,” not least because the American secret services have made universal surveillance the order of the day. And the longer the search continues, the more questions arise. Are the secret services indeed as powerful as they assure people?

CNN tried to allay the Americans’ concerns by showing them that the search area is way too vast and inviting them to lend a hand to the official investigation. But it didn’t work out.

No less than 26 countries, 43 ships, 58 planes, the FBI, Interpol, and special services are all looking for the missing Boeing – a situation which looks increasingly like a crime series.

Experts from China and Colorado reportedly found the debris but were told it didn’t belong to Flight MH370. Courtney Love (@Courtney) spotted what looked like a plane on the surface of the water, but her discovery was ridiculed as fantasy. The search operation looks more and more bizarre by the day, as the media portray it in an absurdist light, generating questions from the public.

The Malaysian PM posts regular updates on the missing plane search on his Facebook page. But what looks like a detailed report at first glance provides no proof and no results whatsoever, and now families of the Chinese passengers are threatening to go on hunger strike, unless the investigation comes up with some hard facts.

What have we learnt over the last few days? The plane set off on a regular flight from Malaysia to China on the morning of March 8, carrying 227 passengers and a crew of 12. One hundred and fifty-three passengers were Chinese, including a delegation of 19 well-known Chinese artists. Forty minutes into the flight, the aircraft disappeared from radar screens.

Fourteen minutes later, the pilot switched off all the identification and communication systems aboard.

“All right, roger that,” was the last message to be heard from the cockpit, but the media somehow transformed it into “All right, goodnight.”

A Reuters source says the tracking systems recorded the plane dropping from 10,000 to 3,500 meters. AP’s military source stated that the plane had changed direction by 110 degrees. Malaysian officials denied both assertions.

The public was also told that the plane had stayed in the air for four, maybe even eight more hours. In this time, it could have made it all the way to Afghanistan, Pakistan, Kyrgyzstan, Iran, Vietnam, Russia, or some ocean island. All states reported that the plane didn’t land on their territory.

Experts say that such a plane requires a 3.5 km long strip to land. So the theory that it flew to Taliban controlled tribal areas is not valid – there are no such landing strips there.

India was the only country to stop the search, but later resumed it. Everybody else, the public is told, is still searching.

A terrorist attack was the first theory. It was the working theory for several days, based on the fact that the two Iranian passengers (aged 18 and 29) on board had fake European passports.

They bought those passports in Thailand. At first, the media thought that Russians were behind the fake travel documents, but it was soon discovered that some man had stolen them, leaving his Russian girlfriend’s passport behind. Then the media reported that it was not his girlfriend, the Russian woman’s passport had also been stolen, and that its holder had filed a report with the police.

The Iranian terrorism theory was later denied, because the two illegal immigrants were trying to get to their relatives in Europe by flying through Beijing.

Parliamentarian Hossein Naghavi Hosseini, spokesman for Iran’s Foreign Policy Committee, wrote that there were no Iranian terrorists on board and accused the USA of hijacking the plane. He also accused the US of finding such questionable characters and using them to distract the media and blame everything on Muslim countries.

“Documents published by the Western media about two Iranians getting on the plane without passports is psychological warfare. Americans recruit some people for such kinds of operations so they can throw the blame on other countries, especially Muslim countries,” the Iranian diplomat said, as quoted by The New York Times.

Interestingly, no other media have quoted the Iranian diplomat. But somehow they stopped looking for the Iranian terrorists. There was some information about the 18-year-old Iranian and absolutely nothing about his 29-year-old friend. Ironically, American social media users expressed concern about the plane maybe flying to Vietnam. Israeli media promoted the idea of Iran and the Taliban being behind the possible terrorist attack.

The Malaysian PM thinks the whole incident was planned by some group.

Malaysian investigators ran a thorough check on the pilots. They searched the house of the 53-year-old captain. He had a flight simulator in his house and he also supported an opposition figure – a father of six, who was recently accused of homosexual relations.

The junior pilot apparently liked to flirt with female passengers, took pictures with them, and smoked in the cockpit. Police also found one of the girls he had flirted with. She saw their pictures together, remembered, and recognized him.

So the girl was found, but the jet is still at large.

Investigators found and restored deleted files on the pilot’s home flight simulator and discovered maps of four US bases. But none of them had a landing strip longer than 1 km.

After ten days of futile search by planes and ships, there was finally a voice of reason in the midst of all the media hype, calling on the capabilities of American intelligence services.

The Independent asked how, given 21st-century communication technology, a large passenger jet can simply vanish. Since every iPad and iPhone owner can get an app that allows them to trace their device if lost, it seems absurd that a £160m, 250-ton jet aircraft should be untraceable.

20 passengers from Freescale Semiconductor onboard

On March 14, The Epoch Times asked about the 20 employees from Freescale Semiconductor, who were on board of the plane.

The paper’s HQ is in New York, it is published in several languages and funds the Falun Gong group, which is outlawed in China.

The paper reminded us that the company’s technologies were used in the US mission to land a man on the moon, as well as the first two-way mobile radio that had a power supply and receiver for cars. However, there is no mention of the fact that the corporation split from Motorola and is now part of the Blackstone Group, which had acquired a mortgage for the World Trade Center.

The publication posted questions from its Facebook page: “Why were so many freescale employees traveling together? What were their jobs? Were they on a mission and if so what was this mission? Can these employees be the cause of the disappearance of this plane? Could the plane have been hijacked and these people kidnapped? Did these employees hold valuable information, and did they have any valuable cargo with them? Did they know company and technological secrets? With all the might of technology, why can’t this plane be located? Where is this plane where are these people?”

The corporation did not answer those questions and didn’t explain why 20 of its employees (12 from Malaysia and eight from China) were headed to Beijing. It only stated that there were no top managers among these people.

Conspiracy theorists, whom we often consider crazy, were the first ones to bring them up.

But sometimes these groups can be helpful in clarifying certain things, although it is also true that some of their statements are simply absurd. Apparently four patent holders for a new technology – which could make the aircraft invisible – were on that plane.

According to the article, the company registered the patent on March 12. Four inventors and patent holders were on board:

Had the patent been registered on March 7, the individuals’ families would have inherited the shares, but now the company holds all the rights to the patent.

This information has been translated into many languages and is spreading through social media. Some even say that Israel may have been involved, or maybe the situation in Crimea is implicated somehow.

On March 9, a very interesting video investigation was posted on YouTube.

There is no mention of where the information came from, but it shows the movement of different planes over Malaysia on the night of March 7. The voiceover points out two planes, possibly military jets, moving faster than all civilian aircraft disappearing from the radar before our Boeing.

The search for the missing Boeing is somewhat reminiscent of the operation by the Boston police in their search for the two Chechens accused of the Boston Marathon bombing: lots of noise, lots of disinformation. And the older brother ended up dead, even though he was alive during the arrest. And nobody is explaining how it happened. The younger brother was shot in the neck, he appeared in court and pleaded innocent, but faces capital punishment charges. And nobody bothers to comment on the fact that the pictures that had been submitted as evidence were tampered with.

It’s probable that if an American plane disappeared in some part of the world, the US would claim special interests in that territory and take drastic action.

Whatever the results of the search are, many questions remain unanswered. Western intelligence services claim their satellites can read the newspaper held by anyone in any part of the world. They claim they can track down any criminal and that the massive spending on security doesn’t hurt the freedom of the people, but actually saves them. Those who oppose the practices say that we can all be tracked through our mobile phones and computers.

This story with the Malaysian Boeing can only mean two things: either US intelligence greatly overestimates their abilities, or they know what happened to the plane and are hiding the information from the public.

Nadezhda Kevorkova is a war correspondent who has covered the events of the Arab Spring, military and religious conflicts around the world, and the anti-globalization movement.