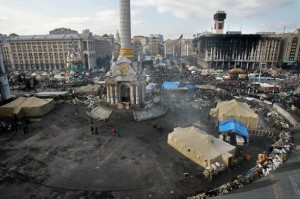 20 Mar 2014 – U.N. Secretary-General Ban Ki-moon, conscious of the stark ineffectiveness of the Security Council over the upheaval in Ukraine, is engaged in a round of shuttle diplomacy with Russian and Ukrainian leaders to help resolve the crisis in that region.

“The secretary-general is desperately trying to create a U.N. role in the spreading dispute,” said one Third World diplomat.

“It’s a good try – but in a lost cause,” he said, pointing out that Ban is up against a tough-talking Russian President Vladimir Putin who has already rejected a political compromise held out by U.S. President Barack Obama.

Norman Solomon, founding director of the Washington-based Institute for Public Accuracy, told IPS it is proper that “Ban Ki-moon should try to mediate the conflict, but it’s too bad his itinerary on this trip won’t also take him to Washington.”

Placing recent events in context, the U.S. and Russian governments are both blameworthy, he said.

“And if one takes seriously the unfortunate but very real dynamics that impel large nations to be concerned about spheres of influence – particularly in the vicinity of their borders – the U.N. secretary-general should be willing to confront President Obama as well as President Putin,” said Solomon, author of ‘War Made Easy: How Presidents and Pundits Keep Spinning Us to Death.’

He said one of the ways that Ban could move toward defusing this crisis would involve urging a rollback of the expansion of NATO (North Atlantic Treaty Organisation), along with an ironclad pledge from NATO to never seek membership from Ukraine.

“A secretary-general less subservient to the U.S. government might be willing to give it a try,” he said.

Michael Ratner, president emeritus of the Centre for Constitutional Rights, told IPS, “I don’t know what the U.N. secretary-general did while that coup was planned and carried out, but his actions certainly come too late now.”

It would be interesting if he stated the coup in Ukraine was just that, and condemned the West for its interference, he added.

“For U.S. officials and press to claim somehow that the coup which occurred in Ukraine, engineered by the West, complied with law, while the referendum in Crimea did not, is utter hypocrisy,” said Ratner, president of the Berlin-based European Centre for Constitutional and Human Rights.

“But the facts are hard to find in the mainstream media,” he added.

John Quigley, professor emeritus of international law at Ohio State University, told IPS it would advance the cause of peace and stability if the secretary-general supports the right of self-determination of the people of Crimea and if he distances himself from the statements of Western leaders who have denounced the referendum vote in Crimea and who view the incorporation of Crimea into the Russian Federation as an unlawful annexation.

“The principles of the U.N. Charter require such a stance on his part,” said Quigley, author of ‘The Ruses for War: American Intervention since World War II.’

Asked about his meeting with Putin, the secretary-general told reporters in Moscow Thursday: “I am not in a position to disclose all what the president said. What I can tell you is that I expressed my very serious, grave concerns about the current situation where tension is going [up].”

Political emotions have been hardened between important countries, particularly Russia, as a permanent member of the Security Council, and the European Union and the United States. They should really resolve this issue peacefully, Ban added.

“Imagine the response from Washington if Russia or China or some other sizable world power had worked hard to build a military and/or political alliance near U.S. borders. The cries of outrage from the USA would be matched by strenuous and muscular forms of intervention,” said Solomon.

Yet top officials of the U.S. government continue to act as though Russian leaders have no legitimate security interests in what goes on in Ukraine, he pointed out.

Solomon said the arrogance of nationalistic and geopolitical power matches up from the White House to the Kremlin and back again, with dangerous escalation of words and deeds.

Ratner told IPS, “I think it’s important to take on the dominant narrative in the Western press that somehow the overthrow of the government in the Ukraine was good, that Putin is the imperialist and that Russia is unlawfully taking over the Crimea.”

For a long time, he pointed out, the West attempted to undermine Ukraine, make it part of Europe and pull it away from Russia.

And it has tried this with other Republics that were formerly part of the Soviet Union, said Ratner.

“In Ukraine, as we know, the West tried to get the government to sign an agreement making the West the exclusive trading partner and pulling it into Western military alliances,” he said.

“As we know from the leaked phone call between U.S. officials, the United States., as Professor Stephen Cohen wrote in the Nation, was plotting to midwife a new, anti-Russian Ukrainian government by ousting or neutralizing its democratically elected president – that is, a coup.

“So now we have had the coup – a successful effort by the West to continue to weaken and isolate Russia,” he noted.

Quigley told IPS the secretary-general is calling for a solution based on principles of the U.N. Charter. And self-determination is one of those principles.

The people of Crimea have been consistently in favour of separation from Ukraine since the time of the break-up of the Union of Soviet Socialist Republics (USSR). The unfortunate focus on sanctions by the major Western powers has meant that pressing human rights issues are being ignored, said Quigley.

The secretary-general plans to meet with members of the U.N. human rights monitoring mission in Kiev on Friday. This is most helpful, he added.

Ban could also focus on human rights in Crimea, in particular the concerns of the two major minorities there – Ukrainians and Tatars – who oppose in the main the affiliation of Crimea with Russia.

The secretary-general should have raised this issue with the Russian Federation so that it might provide some assurances the rights of these minorities will be respected, he added.