When Ukrainian neo-Nazis – infuriated over the killing of an ultranationalist leader – surrounded the Parliament in Kiev, the incident presented a problem for the U.S. news media which has been trying to airbrush the neo-Nazis out of the Ukraine narrative. 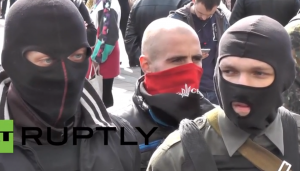 The U.S. media’s take on the Ukraine crisis is that a “democratic revolution” ousted President Viktor Yanukovych, followed by a “legitimate” change of government. So, to mention the key role played neo-Nazi militias in the putsch or to note that Yanukovych was democratically elected – and then illegally deposed – gets you dismissed as a “Russian propagandist.”

But Ukraine’s neo-Nazis are not some urban legend. Their presence is real, as they swagger in the paramilitary garb through the streets of Kiev, displaying Nazi insignias, honoring SS collaborators from World War II, and hoisting racist banners, including the white-power symbol of the Confederate battle flag.

Over the past few days, the neo-Nazis have surged to the front of Ukraine’s unrest again by furiously protesting the killing of one of their leaders, Oleksandr Muzychko, known as Sashko Bily. The Interior Ministry reported that Muzychko died in a Monday night shoot-out with police in Rivne in western Ukraine.

But the right-wing paramilitaries claim that Muzychko was murdered in a cold-blooded contract hit, and these modern-day storm troopers have threatened to storm the parliament building if the interim Interior Minister is not fired.

This renewed disorder has complicated the storytelling of the major U.S. news media by challenging the sweetness-and-light narrative preferred by U.S. policymakers. The New York Times, the Washington Post and other leading news outlets have worked hard to airbrush the well-established fact that neo-Nazi militants spearheaded the coup on Feb. 22.

To dismiss that inconvenient fact, the major U.S. media has stressed that the extreme rightists made up a minority of the demonstrators, which – while true – is largely irrelevant since it was the paramilitary Right Sektor that provided the armed force that removed Yanukovych and then dominated the “transition” period by patrolling key government buildings. As a reward, far-right parties were given control of four ministries.

Some U.S. outlets also have picked up on the unsubstantiated U.S. government theme that Russia is dispatching unidentified “provocateurs” to destabilize the coup regime in Kiev, though it doesn’t seem like Moscow would have to do much besides stand aside and watch the interim government’s unruly supporters turn on each other.

But reality has stopped playing much of a role in the U.S. news media’s Ukraine reporting as the U.S. press continues to adjust the reality to fit with the desired narrative. For instance, the New York Times, in its boilerplate account of the uprising, has removed the fact that more than a dozen police were among the 80 or so people killed. The Times now simply reports that police fired on and killed about 80 demonstrators.

Fitting with its bowdlerized account, the Times also ignores evidence that snipers who apparently fired on both police and protesters before the coup may have been working for the opposition, not Yanukovych’s government. An intercepted phone call by two European leaders discussed those suspicions as well as the curious decision of the post-coup government not to investigate who the snipers really were.

But most significantly, the U.S. mainstream media has struggled to downplay the neo-Nazi angle as was apparent in the Times’ report on President Vladimir Putin’s call on Friday to President Barack Obama to discuss possible steps to defuse the crisis. Putin noted that neo-Nazis had surrounded the parliament.

“In citing extremist action, Mr. Putin sought to capitalize on a tense internal showdown in Kiev,” the Times wrote. “The presence of masked, armed demonstrators threatening to storm the Parliament building offered the Russian government an opportunity to bolster its contention that the ouster of President Viktor F. Yanukovych, a Moscow ally, after pro-European street protests last month was an illegal coup carried out by right-wing extremists with Western encouragement.”

But the Times couldn’t simply let those facts speak for themselves, though they were all true: right-wing extremists did provide the key manpower and organization to overrun government buildings on Feb. 22 and there is no doubt that these right-wing elements were getting Western encouragement, including a shoulder-to-shoulder appearance by Sen. John McCain.

The Times felt compelled to interject an argumentative counterpoint, saying: “In fact, the nationalist groups, largely based in western Ukraine, had formed just one segment of a broad coalition of demonstrators who occupied the streets of Kiev for months demanding Mr. Yanukovych’s ouster.”

And, that has been a consistent pattern for the supposedly objective U.S. news media. If the Russians say something, even if it is clearly true, the point must be contradicted. However, when a U.S. official states something about the Ukraine crisis, the claim goes unchallenged no matter how absurd.

For example, when Secretary of State John Kerry denounced Putin’s intervention in Crimea by declaring, “you just don’t in the 21st Century behave in 19th Century fashion by invading another country on completely trumped-up pretext,” mainstream U.S. news outlets simply let the statement stand without noting that Kerry himself had voted in 2002 to authorize President George W. Bush to invade Iraq in pursuit of non-existent weapons of mass destruction.

You might think that Kerry’s breathtaking hypocrisy would be newsworthy or at least a relevant fact that should be pointed out to readers, but no. The Times also has routinely distorted Crimea’s secession from Ukraine. The Black Sea peninsula, a longtime Russian province that was only attached to Ukraine for administrative purposes during Soviet days, asserted its independence after the coup ousting Yanukovych, who had won Crimea overwhelmingly.

No one seriously doubts that the vast majority of Crimean citizens wanted to escape the disorder and hardship enveloping Ukraine – and to return to Russia with its higher per capita income and functioning national government – but the Obama administration and the dutiful U.S. news media have pretended otherwise.

In New York Times speak, Crimea’s popular vote to secede from Ukraine and to join Russia was simply Putin’s “seizure” of Crimea. The Times and other mainstream news outlets dismissed Crimea’s March 16 referendum as somehow rigged – citing the 96 percent tally for secession as presumptive evidence of fraud – although there was no actual evidence of election rigging. Exit polls confirmed the overwhelming majority favoring secession from Ukraine and annexation by Russia.

And, really, who could blame the people of Crimea? As Ukraine’s acting Prime Minister Arseniy Yatsenyuk has said, Ukraine “is on the edge of economic and financial bankruptcy” and the International Monetary Fund agreed to throw a financial lifeline only if Ukraine imposes “reforms” that Yatsenyuk has admitted are “very unpopular, very difficult, very tough.”

They will be toughest on average Ukrainians who will face severe public sector budget cuts, slashed pensions, soaring heating costs and rapid inflation due to changes in the exchange rate. The cumulative impact of these IMF “reforms” is expected to result in a 3 percent contraction of Ukraine’s already depressed economy.

Yet, much of the mainstream U.S. media ignores the understandable desire of the Crimean people to bail out on the failed Ukrainian state. Instead, the MSM pretends that Russia simply invaded Crimea and now is threatening to do the same in eastern Ukraine, or as the Times put it, Putin has engaged in “provocative moves punctuated by a menacing buildup of troops on Ukraine’s border.”

The bottom line is that the U.S. government and media have constructed a substantially false narrative for the American people, all the better to manufacture consent behind a $1 billion U.S. aid package for Ukraine and the launch of a new Cold War with the expectation of many more exciting confrontations to come – in places like Syria and Iran – all justifying fatter military budgets.

A more objective and less alarmist narrative on the Ukraine crisis would describe Putin’s actions as primarily defensive and reactive. He was distracted by the Winter Olympics in Sochi and was caught off-guard by the violent putsch that removed Yanukovych.

In light of Yanukovych’s democratic election victory in 2010 and his agreement on Feb. 21 to speed up new elections (a deal that was negated within hours by the U.S./EU-supported coup), Russia has a legitimate argument that the coup regime in Kiev is illegitimate.

The removal of Yanukovych not only was spearheaded by neo-Nazi militias but subsequent parliamentary actions did not follow Ukraine’s constitutional rules. The putsch essentially disenfranchised the large ethnic-Russian populations in the east and south, where Yanukovych had his political base.

Then, the rump parliament in Kiev – reflecting the intense Ukrainian nationalism in the western section – passed punitive laws targeting these Russian speakers, including elimination of Russian as an official language. For Putin to be troubled by this crisis on his border — and to take action — was neither surprising nor particularly provocative.

If the New York Times and other leading U.S. outlets did their journalism in a professional way, the American people would have had a more nuanced understanding of what happened in Ukraine and why. Instead, the Times and the rest of the MSM resumed their roles as U.S. propagandists, much as they did in Iraq in 2002-03 with their usual preference for a simplistic “good-guy/bad-guy” dichotomy.

In the case of Ukraine, that happy dichotomy has been challenged again by the reemergence of those inconvenient neo-Nazis.

[For more on this topic, see Consortiumnews.com’s “The Danger of False Narrative.”]

Investigative reporter Robert Parry broke many of the Iran-Contra stories for The Associated Press and Newsweek in the 1980s. You can buy his new book, America’s Stolen Narrative, either in print here or as an e-book (from Amazon and barnesandnoble.com). For a limited time, you also can order Robert Parry’s trilogy on the Bush Family and its connections to various right-wing operatives for only $34. The trilogy includes America’s Stolen Narrative. For details on this offer, click here.