Brazil’s ‘Internet Bill of Rights’ a Victory for Web Freedom

Tim Berners-Lee, Father of the Internet, says law will ‘unleash a new era—in which the rights of citizens in all countries are protected by a Digital Rights Charter’. 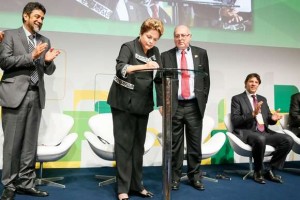 A landmark law that guarantees equal access to the nation’s internet and protects the privacy of users was signed by Brazilian President Dilma Rousseff on Wednesday [23 Apr 2014], in a move that is being hailed as a historic step for online freedom worldwide.

The “Civil Law Marco Internet”—dubbed the Internet Bill of Rights by its supporters—was passed unanimously by Brazil’s Senate on Tuesday. Rousseff signed the bill at the launch of the two-day NETmundial conference in Sao Paulo, Brazil.

“Internet and freedom are wired together forever,” said Michael Freitas Mohallem, Campaign Director at Avaaz, an international organization that collected more than 350,00 signatures in Brazil calling for net neutrality legislation.

“Marco Civil is a bill created, championed, and today delivered into law by the people,” Freitas Mohallem continued. “This is a truly historical day for people power, with Brazil now leading the world in keeping the net neutral.”

Sir Tim Berners-Lee, considered the ‘Father of the Internet,’ hailed the law as “a gift to the web on its 25th birthday.”

Berners-Lee said the law “reflects the Internet as it should be: an open, neutral and decentralized network, in which users are the engine of collaboration and innovation.” He added that by passing the bill, Brazil would “unleash a new era—in which the rights of citizens in all countries are protected by a Digital Rights Charter.”

The Brazilian government fought hard to preserve certain aspects of the law, including a net neutrality provision that was fiercely opposed by telecom companies, according to Reuters, because it bars them from giving preferential treatment to some websites or content providers over others.

Rousseff, whose targetting by the NSA was revealed by documents leaked by NSA whistleblower Edward Snowden, has become a strong proponent of internet privacy.

“This is a truly historical day for people power, with Brazil now leading the world in keeping the net neutral.”
—Michael Freitas Mohallem, Campaign Director at Avaaz.org

“The Civil Marco protects the privacy of citizens, both in relation to the government and in relation to companies operating on the Internet,” Rousseff said during the signing.

One provision of the law holds that companies, such as Google and Facebook, will be subject to Brazil’s laws and courts in cases involving information on Brazilians, even if the data is stored on servers abroad. Officials had initially wanted metadata on Brazilian users stored exclusively in Brazil, but that “contentious provision” was removed after companies threatened that would “push up their costs and create barriers to the free flow of information,” Reuters notes.

Further, the law limits the gathering and use of metadata on Internet users in Brazil. Communications are “inviolable,” except by specific court order.

The law also protects freedom of expression and information by establishing clear rules for the removal of content. Service providers will not be liable for content published by users, but they must comply with court orders to remove offensive or libelous material.

Marking the opening day of the NETmundial conference, during which representatives from 80 nations will convene to discuss a proposed set of “Internet Governance Principles,” Rousseff said that Brazil “has much to contribute to the process of building a new Internet governance.” She added that the development of the law was “innovative” because the process “echoed the voices of the streets, networks and institutions.”

Protesters have criticized the international forum as a “farce,” saying the proposed standards lack adequate protections.

On Monday, it was revealed that the United States had submitted a draft of the “Principles” with specific edits in an attempt to strip the document from binding protections of net neutrality.