Edward Snowden and Glenn Greenwald via Video at Amnesty Event 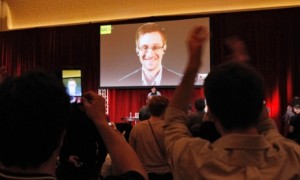 Supporters of Amnesty International cheer as Edward Snowden is introduced via video at a conference in Chicago on Saturday [5 Apr 2014].
Photograph: Frank Polich/Reuters

Edward Snowden and reporter Glenn Greenwald, who brought to light the whistleblower’s leaks about mass U.S. government surveillance last year, appeared together via video link from opposite ends of the earth on Saturday [5 Apr 2014] for what was believed to be the first time since Snowden sought asylum in Russia.

A sympathetic crowd of nearly 1,000 packed a downtown Chicago hotel ballroom at Amnesty International USA’s annual human rights meeting and gave Greenwald, who dialed in from Brazil, a raucous welcome before Snowden was patched in 15 minutes later to a standing ovation.

The pair cautioned that government monitoring of “metadata” is more intrusive than directly listening to phone calls or reading emails and stressed the importance of a free press willing to scrutinize government activity.

Metadata includes which telephone number calls which other numbers, when the calls were made and how long they lasted. Metadata does not include the content of the calls.

Amnesty International is campaigning to end mass surveillance by the U.S. government and calling for Congressional action to further rein in the collection of information about telephone calls and other communications.

Last year, Snowden, who had been working at a NSA facility as an employee of Booz Allen Hamilton, leaked a raft of secret documents that revealed a vast U.S. government system for monitoring phone and Internet data.

The leaks deeply embarrassed the Obama administration, which in January banned U.S. eavesdropping on the leaders of friendly countries and allies and began reining in the sweeping collection of Americans’ phone data in a series of limited reforms triggered by Snowden’s revelations.

Snowden faces arrest if he steps foot on U.S. soil.

President Barack Obama said last month he plans to ask Congress to end the bulk collection and storage of phone records by the NSA but allow the government to access metadata when needed.

Snowden and Greenwald said that such data is in fact more revealing than outright government spying on phone conversations and emails.

“Metadata is what allows an actual enumerated understanding, a precise record of all the private activities in all of our lives. It shows our associations, our political affiliations and our actual activities,” said Snowden, dressed in a jacket with no tie in front of a black background.

A Reuters/Ipsos poll this week showed the majority of Americans were concerned that Internet companies were encroaching on too much of their lives.

Greenwald, who met with Snowden 10 months ago and wrote about the leaked documents in the Guardian and other media outlets, promised further revelations of government abuses of power at his new media venture the Intercept.

“My hope and my belief is that as we do more of that reporting and as people see the scope of the abuse as opposed to just the scope of the surveillance they will start to care more,” he said.

“Mark my words. Put stars by it and in two months or so come back and tell me if I didn’t make good on my word.”