Humor but Not Humiliation: Finding the Sweet Spot in Nonviolent Conflict Resolution

Humor is a time-honored strategy in the repertoire of nonviolence, but we must learn to use it properly. Poke fun at the problem not the person. 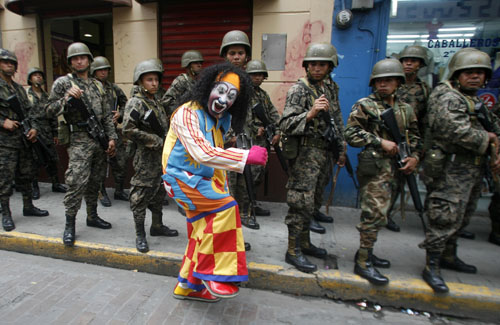 Five or six men stood over me yelling as I sat in a chair at the Ministry of the Interior in San Salvador in 1989. I was there to renew my visa as a member of Peace Brigades International (PBI), an NGO that provides ‘protective accompaniment’ for teachers, trade unionists, students, indigenous leaders, church workers and other activists when faced by threats of violence.

I was on the verge of tears, with horror stories fresh in my mind about people who had been detained, deported or ‘disappeared’ after visits to the Ministry.

But I’d been living with, and being inspired by, Salvadorans and Guatemalans who had found many ways to act creatively and nonviolently when under pressure. I had to try something.

The men reacted with more taunts: “Can you believe these foreigners, what liars they are? This one says she’s a clown.”

As calmly as I could, I pushed a photo of myself in clown make-up across the table, and pulled out an animal modeling balloon that I kept in my bag. Even as I began to inflate it I could feel the tension in the room subside. The shouts and jeers died away. By the time the rubber was twisted into the shape of a dog, the atmosphere had been transformed. “Can I have a green one?” one of my interrogators asked, “Do you make rabbits?” Out came the 143 other balloons that I’d brought with me.

I was stunned. The turnabout was so rapid and so absolute. I got my visa, and in the process I learned a fundamental lesson about the role of humor in situations of potential violence.

Humor can be very effective in establishing a human connection between parties in a conflict, and thereby defusing the conflict itself, though it can be very hard to remember when the heat is really on.  In fact humor is a time-honored strategy in the repertoire of nonviolence. But like any strategy it has to be appropriately applied. And that means exposing the folly in what someone is doing without ridiculing the person or the group they belong to: “humor but not humiliation.”  It’s a fine line to tread.

Aside from its effects on opponents, humor is also a great way to relieve tensions in activists themselves. Mahatma Gandhi once said that if it had not been for his sense of humor, he would have gone mad long ago in the face of such disharmony and hatred.

On the other hand, humor has a dark side, and it can easily backfire.  To take one recent example, someone in the U.S. activist community got the bright idea of renaming General David Petraeus as “General BetrayUs.” At the time he was the Commander of the U.S. Central Command in Afghanistan. A good joke maybe, but it was widely regarded as a personal affront in poor taste that did nothing to build the anti-war movement in the USA.  A similar attempt to style General William Westmoreland as “WasteMoreLand” decades earlier had not backfired as badly, but it still did no appreciable good in strengthening public support for the struggle against the war in Vietnam.

These examples illustrate an important rule of thumb that needs to be born in mind when invoking the power of humor to dissolve tensions in any nonviolent interaction:  remember that you are not against the well-being of the person or people you are opposing.

There is no conflict that cannot be resolved in a way that benefits all of the parties in some shape or form, so no good is served by making alienation even worse. Humiliation is the most potent way of alienating anyone, a fact that activists sometimes forget.

Theunderlying good of all is served when a conflict can be moved towards the ultimate goal of reconciliation. This isn’t just a moral maxim; it makes solid, practical sense. As Abraham Lincoln once said, “The best way to destroy an enemy is to make him a friend.”

This rule of thumb applies even when we are laughing at ourselves.  Of course, it’s always helpful not to take oneself too seriously, but self-directed humor has to be aimed with the same precaution in mind – to laugh at something that we’ve done or said, not at who or what we are.  In nonviolence, we should not accept humiliation any more than we should dish it out.

Whether we ourselves or others are the target, the key is to poke fun at the behavior or the attitudes that are causing the problems, not at the person.  This allows opponents to put some distance between themselves and what they are thinking or doing – to relax their identification with destructive feelings and actions as an inherent part of their identity, and thus begin to let go.

When we can use humor skillfully, we’re well positioned to apply this basic rule of thumb in situations that aren’t funny at all.

In the same year as my visit to the Ministry of the Interior, I was briefly detained and imprisoned in El Salvador. At the time I was arrested, I was in a church refugee centre, trying to protect the safety of Salvadoran refugees and church workers who were inside. The Salvadoran military invaded the centre, scattered the refugees, detained the workers, and took me and four other PBI workers to the Treasury Police Jail. I was blindfolded, handcuffed, interrogated, kept standing without food and water, and threatened with rape and mutilation.

This was a torture centre; that much I knew. I had Salvadoran friends who had been tortured in this prison, and I could hear torture all around me. Under my blindfold I caught glimpses of people, broken, lying on the ground. But I also knew that I had lots of people watching what was happening to me. PBI had activated a “phone tree” through which people put pressure on the Salvadoran authorities and my own government in Canada using phone calls and faxes. I heard later that the President of El Salvador had called the jail twice himself that day. As the pressure mounted, the guards relented, and then said they would release me.

I had been imprisoned with Marcela Rodriguez Diaz, a Colombian colleague, and my North American life was being valued more than hers, so I refused to leave the jail without her. Instead I was re-imprisoned and stayed until we could both be released.

The guards, their questions laced with sexual innuendo, challenged me: “Do you miss us?” they asked, “do you want us?” “No… of course I don’t want to be here,” I replied, “but you are soldiers, you know what solidarity is. You know that if a comrade is down or fallen in battle, you wouldn’t leave them, and I can’t leave my comrade, not now, not here. You understand.”

I don’t know what response I thought I would get. After all, I was speaking to a group of torturers. Yet I knew that by placing the guards in what Martin Luther King called a “dilemma action” I had some hope of changing their behavior: if they agreed with me they would have to implicitly acknowledge our joint humanity. If they disagreed they would show – even to themselves – that they were inhumane.

The guards went silent. Then after a long while one of them said, “Yes… we know why you are here.” From that point onwards, other guards kept coming from all around the jail, looking for the two that they had heard about, the “inseparable ones.” Just like at the Ministry, I had found a connection – a shared space of humanity – in which the threat of violence could be confronted without alienating those involved.

My small gesture of returning to jail for my friend, combined with the phone calls and other messages that PBI supporters around the world had sent to the Salvadoran government on our behalf, eventually led to our joint release.

Let’s be clear: there is no guarantee that actions like these will have the desired effect.  No one can predict for sure that an opponent will be detached enough to look or laugh at themselves without feeling that they are the behavior that is being singled out. But we can’t afford to ignore humor just because it doesn’t always work.

In fact, there is a sense that humor, when used in the right spirit, does always work: it always puts quarrels into a larger context, and it humanizes the grimmest of situations.  Even if the effects aren’t immediately visible, humor changes things for the better.

Karen Ridd is an educator, storyteller and learner in Conflict Resolution and International Development Studies at Menno Simons College of the Canadian Mennonite University, affiliated with the University of Winnipeg.  Karen contributed her personal stories to this article, parts of which appeared previously in Nonviolence for Elvin Spirits, edited by Jack Ross.

Michael Nagler is Professor Emeritus of Classics and Comparative Literature at the University of California, Berkeley, and President of the Metta Center for Nonviolence in Petaluma, California. His new book is The Nonviolence Handbook. Michael contributed the conclusions and lessons learned to this article.

This article is published under a Creative Commons Attribution-NonCommercial 3.0 licence.

Love at the barrel of a gun – Michael N. Nagler