Seeds of Destruction: The Diabolical World of Genetic Manipulation

This is no ordinary book about the perils of GMO. 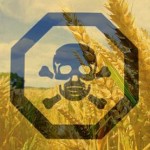 “Seeds of Destruction: The Hidden Agenda of Genetic Manipulation” by F. William Engdahl is a skilfully researched book that focuses on how a small socio-political American elite seeks to establish control over the very basis of human survival: the provision of our daily bread.

This is no ordinary book about the perils of GMO.  Engdahl takes the reader inside the corridors of power, into the backrooms of the science labs, behind closed doors in the corporate boardrooms. The author cogently reveals a diabolical world of profit-driven political intrigue, government corruption and coercion, where genetic manipulation and the patenting of life forms are used to gain worldwide control over food production. If the book often reads as a crime story, that should come as no surprise. For that is what it is.

Engdahl’s carefully argued critique goes far beyond the familiar controversies surrounding the practice of genetic modification as a scientific technique. The book is an eye-opener, a must-read for all those committed to the causes of social justice and world peace.

What follows is the Preface to ”Seeds of Destruction: The Hidden Agenda of Genetic Manipulation” by F. William Engdahl (available through Global Research):

“We have about 50% of the world’s wealth but only 6.3% of its population. This disparity is particularly great as between ourselves and the peoples of Asia. In this situation, we cannot fail to be the object of envy and resentment. Our real task in the coming period is to devise a pattern of relationships which will permit us to maintain this position of disparity without positive detriment to our national security. To do so,we will have to dispense with all sentimentality and day-dreaming; and our attention will have to be concentrated everywhere on our immediate national objectives.We need not deceive ourselves that we can afford today the luxury of altruism and world-benefaction.”
-George Kennan, US State Department senior planning official, 1948

This book is about a project undertaken by a small socio-political elite, centered, after the Second World War, not in London, but in Washington. It is the untold story of how this self-anointed elite set out, in Kennan’s words, to “maintain this position of disparity.” It is the story of how a tiny few dominated the resources and levers of power in the postwar world.

It’s above all a history of the evolution of power in the control of a select few, in which even science was put in the service of that minority. As Kennan recommended in his 1948 internal memorandum, they pursued their policy relentlessly, and without the “luxury of altruism and world-benefaction.”

Yet, unlike their predecessors within leading circles of the British Empire, this emerging American elite, who proclaimed proudly at war’s end the dawn of their American Century, were masterful in their use of the rhetoric of altruism and world-benefaction to advance their goals. Their American Century paraded as a softer empire, a “kinder, gentler” one in which, under the banner of colonial liberation, freedom, democracy and economic development, those elite circles built a network of power the likes of which the world had not seen since the time of Alexander the Great some three centuries before Christ—a global empire unified under the military control of a sole superpower, able to decide on a whim, the fate of entire nations.

This book is the sequel to a first volume, A Century ofWar: Anglo-American Oil Politics and the New World Order. It traces a second thin red line of power. This one is about the control over the very basis of human survival, our daily provision of bread. The man who served the interests of the postwar American-based elite during the 1970’s, and came to symbolize its raw realpolitik, was Secretary of State Henry Kissinger. Sometime in the mid-1970’s, Kissinger, a life-long practitioner of “Balance of Power” geopolitics and a man with more than a fair share of conspiracies under his belt, allegedly declared his blueprint for world domination: “Control the oil and you control nations. Control the food, and you control the people.”

The strategic goal to control global food security had its roots decades earlier, well before the outbreak of war in the late 1930’s. It was funded, often with little notice, by select private foundations, which had been created to preserve the wealth and power of a handful of American families.

Originally the families centered their wealth and power in New York and along the East Coast of the United States, from Boston to New York to Philadelphia and Washington D.C. For that reason, popular media accounts often referred to them, sometimes with derision but more often with praise, as the East Coast Establishment.

The center of gravity of American power shifted in the decades following the War. The East Coast Establishment was overshadowed by new centers of power which evolved from Seattle to Southern California on the Pacific Coast, as well as in Houston, Las Vegas, Atlanta and Miami, just as the tentacles of American power spread to Asia and Japan, and south, to the nations of Latin America.

In the several decades before and immediately following World War II, one family came to symbolize the hubris and arrogance of this emerging American Century more than any other. And the vast fortune of that family had been built on the blood of many wars, and on their control of a new “black gold,” oil. 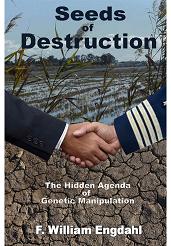 What was unusual about this family was that early on in the building of their fortune, the patriarchs and advisors they cultivated to safeguard their wealth decided to expand their influence over many very different fields. They sought control not merely over oil, the emerging new energy source for world economic advance. They also expanded their influence over the education of youth, medicine and psychology, foreign policy of the United States, and, significant for our story, over the very science of life itself, biology, and its applications in the world of plants and agriculture.

For the most part, their work passed unnoticed by the larger population, especially in the United States. Few Americans were aware how their lives were being subtly, and sometimes not so subtly, influenced by one or another project financed by the immense wealth of this family.

In the course of researching for this book, a work nominally on the subject of genetically modified organisms or GMO, it soon became clear that the history of GMO was inseparable from the political history of this one very powerful family, the Rockefeller family, and the four brothers—David,Nelson, Laurance and John D. III—who, in the three decades following American victory in World War II, the dawn of the much-heralded American Century, shaped the evolution of power George Kennan referred to in 1948.

In actual fact, the story of GMO is that of the evolution of power in the hands of an elite, determined at all costs to bring the entire world under their sway.

Three decades ago, that power was based around the Rockefeller family. Today, three of the four brothers are long-since deceased, several under peculiar circumstances.However, as was their will, their project of global domination—“full spectrum dominance” as the Pentagon later called it—had spread, often through a rhetoric of “democracy,” and was aided from time to time by the raw military power of that empire when deemed necessary. Their project evolved to the point where one small power group, nominally headquartered in Washington in the early years of the new century, stood determined to control future and present life on this planet to a degree never before dreamed of.

The story of the genetic engineering and patenting of plants and other living organisms cannot be understood without looking at the history of the global spread of American power in the decades following World War II. George Kennan, Henry Luce, Averell Harriman and, above all, the four Rockefeller brothers, created the very concept of multinational “agribusiness”. They financed the “Green Revolution” in the agriculture sector of developing countries in order, among other things, to create new markets for petro-chemical fertilizers and petroleum products, as well as to expand dependency on energy products. Their actions are an inseparable part of the story of genetically modified crops today.

By the early years of the new century, it was clear that no more than four giant chemical multinational companies had emerged as global players in the game to control patents on the very basic food products that most people in the world depend on for their daily nutrition—corn, soybeans, rice, wheat, even vegetables and fruits and cotton—as well as new strains of disease-resistant poultry, genetically-modified to allegedly resist the deadly H5N1 Bird Flu virus, or even gene altered pigs and cattle. Three of the four private companies had decades-long ties to Pentagon chemical warfare research. The fourth, nominally Swiss, was in reality Anglodominated. As with oil, so was GMO agribusiness very much an Anglo-American global project.

In May 2003, before the dust from the relentless US bombing and destruction of Baghdad had cleared, the President of the United States chose to make GMO a strategic issue, a priority in his postwar US foreign policy. The stubborn resistance of the world’s second largest agricultural producer, the European Union, stood as a formidable barrier to the global success of the GMO Project. As long as Germany, France, Austria, Greece and other countries of the European Union steadfastly refused to permit GMO planting for health and scientific reasons, the rest of the world’s nations would remain skeptical and hesitant. By early 2006, the World Trade Organization (WTO) had forced open the door of the European Union to the mass proliferation of GMO. It appeared that global success was near at hand for the GMO Project.

In the wake of the US and British military occupation of Iraq, Washington proceeded to bring the agriculture of Iraq under the domain of patented genetically-engineered seeds, initially supplied through the generosity of the US State Department and Department of Agriculture.

The first mass experiment with GMO crops, however, took place back in the early 1990’s in a country whose elite had long since been corrupted by the Rockefeller family and associated New York banks: Argentina. 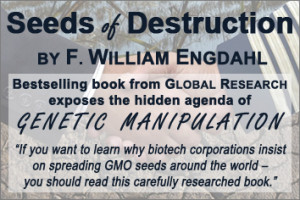 The following pages trace the spread and proliferation of GMO, often through political coercion, governmental pressure, fraud, lies, and even murder. If it reads often like a crime story, that should not be surprising. The crime being perpetrated in the name of agricultural efficiency, environmental friendliness and solving the world hunger problem, carries stakes which are vastly more important to this small elite. Their actions are not solely for money or for profit. After all, these powerful private families decide who controls the Federal Reserve, the Bank of England, the Bank of Japan and even the European Central Bank. Money is in their hands to destroy or create.

Their aim is rather, the ultimate control over future life on this planet, a supremacy earlier dictators and despots only ever dreamt of. Left unchecked, the present group behind the GMO Project is between one and two decades away from total dominance of the planet’s food capacities. This aspect of the GMO story needs telling. I therefore invite the reader to a careful reading and independent verification or reasoned refutation of what follows.

F. William Engdahl is a leading analyst of the New World Order, author of the best-selling book on oil and geopolitics, A Century of War: Anglo-American Politics and the New World Order,’ His writings have been translated into more than a dozen languages.