10 of the Most Endangered Whales on Earth

In 2010, world leaders debated whether to lift a ban on commercial whaling, but the talks broke down. Here’s a look at 10 whales that still haven’t recovered from the last assault. 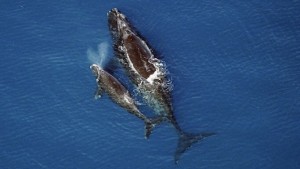 RIGHT BY HER SIDE: A baby North Atlantic right whale swims alongside its mother off the coast of Florida. (Photo: U.S. National Oceanic and Atmospheric Administration)

Whales are a clever bunch, which helped them dominate Earth’s oceans for millions of years and then survive a 300-year onslaught from human hunters. The same wherewithal that makes whales such elusive prey also makes them difficult for scientists to count, but decades of population surveys have at least made one thing clear: Whales aren’t what they used to be.

Whaling fleets killed an estimated 1 million sperm whales between the 18th and 20th centuries, and hundreds of thousands of almost every type of baleen whale. After exhausting popular oil-producing baleen species such as bowhead, gray, humpback and right whales, whalers turned to leaner, less valuable alternatives such as sei and minke whales. Although commercial whaling was banned in 1986 by the International Whaling Commission, sei and minke are still heavily targeted by Japan, Norway and Iceland, which dodge or defy the IWC moratorium.

Overeager whalers aren’t the only problem whales face, but since their three-century assault reduced many whale populations by 90 percent or more, they have certainly made a lasting impression. Today’s shrunken remnants are less able to endure other hardships now that their numbers are so low, both because there are fewer whales left to lose and because those whales have less genetic diversity than their ancestors. So when something unexpected like an oil spill or unusual like ocean acidification raises pressure on these remaining whales, the population and even species as a whole is more likely to feel the repercussions.

The vastness of the ocean and the wanderlust of whales prevent biologists from getting a clear idea of how many are out there, but they can guess well enough to at least know the following 10 whales are in dire straits. This list isn’t comprehensive, but the five baleen and five toothed whales included are generally thought to be among the most endangered whales on the planet.

Also known as “great whales,” these gigantic marine mammals include some of the largest animals that have ever lived — which makes it that much stranger that they eat plankton, tiny sea creatures that are often invisible to the naked eye. They can only subsist on such small morsels because they eat vast quantities at a time, thanks to the “baleen” plates (pictured) they have instead of teeth. Baleen whales take huge gulps of sea water and then force it back out through these filtering mouth plates, keeping any plankton or other food inside to eat. This diet helps them accumulate tons of blubber, or fat, which made them favorite targets of 18th- and 19th-century whalers seeking to boil blubber down into valuable whale oil. Centuries of intensive hunting left most baleen species in shambles, and since they reproduce slowly, scientists worry they’re now more vulnerable to threats like pollution and ship strikes that might have otherwise been minor. While no baleen whales are thriving like they did 300 years ago, the following five are among the biggest losers so far:

Concentrated around the Arctic, bowhead whales have huge, 16-foot-long skulls that help them break through sea ice, as well as the thickest blubber of any whale. Western whalers hunted them for nearly 400 years, eventually reducing their population to about 8 percent of its pre-whaling average. Since the IWC ban, bowhead numbers have risen to roughly 20 percent of their former heights, but they’re still threatened by melting sea ice and the expansion of offshore drilling that’s likely to follow.

Commercial whaling severely depleted both remaining gray whale populations, located in the Eastern and Western North Pacific Ocean. The Eastern Pacific gray whale has fared better, with some 18,000 to 30,000 living along western North America. But the Western Pacific gray whale, found along East Asia’s coasts, numbers fewer than 100, making it the most endangered of all baleen whales. According to the National Oceanic and Atmospheric Administration’s Office of Protected Resources, “its continued survival is questionable.”

Although some humpbacks stay in tropical waters all year, others perform the longest migrations of any mammal, in one case traveling 5,160 miles from Costa Rica to Antarctica. Humpbacks are still recovering from long-term whaling losses, but Japan and Denmark still want the IWC to let them hunt small numbers each year. According to NOAA, “both of these proposed harvests have the potential to negatively impact recovery of humpback whales.” (Click here to watch a video of a hungry humpback in action.)

Along with bowheads and humpbacks, right whales were among the most heavily hunted in the 18th and 19th centuries. Whalers believed they were the “right” whales to hunt, since they not only often swam near shore but also floated conveniently on the surface after being killed. There are three species of right whales, scattered in the North Atlantic, North Pacific and Southern oceans. The North Atlantic right whale now numbers around 300, and while that number is rising, NOAA warns the population is still “nearly extinct.”

Pronounced like “sigh,” sei whales weren’t widely hunted until the late 1950s because they’re thinner and less blubbery than other baleen species, but whalers eventually began targeting them after more desirable species crashed from overharvesting. Even with this late start, some sei populations today are only about 20 percent of what they were before the ’50s, and the species is listed as endangered in U.S. waters. But it’s still pursued by Japanese whalers, and the illegal whale meat that was recently found in a California sushi restaurant was genetically traced back to sei populations that Japan hunts.

While baleen whales consist of 12 large, similar-shaped species, toothed whales are a motley crew of some 70 species, ranging from the 4-foot-long vaquita to the 60-foot-long sperm whale. They’re all united by their relatively normal rows of mammalian teeth (pictured), which differentiate them from the toothless, filter-feeding baleens. They often use echolocation to navigate the seas, and the group also includes some of the most intelligent nonhuman animals on Earth, such as orcas and bottlenose dolphins. They weren’t hunted as fiercely by oil-seeking whalers as their baleen relatives were, but a variety of human influences have nonetheless conspired to decimate some of them even more dramatically. The following five species (or groups of species) include not only the most endangered toothed whales, but also the most endangered whales of any kind:

These small Arctic whales are known as “canaries of the sea” for their chirrups, whistles and other vocal talents, but they’re also a bit like canaries in a coal mine — dead belugas are often so contaminated with PCBs, mercury and petrochemicals that their bodies are classified as toxic waste. Most U.S. populations are stable, but not Alaska’s Cook Inlet beluga, which is down to only 280 whales from about 1,300 in the late 1970s. Subsistence hunting is seen as part of the problem, but Cook Inlet is also highly developed, meaning anything from ship strikes to oil pollution could also be to blame.

Along with bowheads and belugas, narwhals are one of only three whales that spend their entire lives in the Arctic. They’re also one of the strangest-looking whales, with an ivory tusk (technically an overgrown tooth) that extends up to 10 feet from the heads of males and even some females. Like belugas, they’ve never been heavily hunted by industrial whalers, but indigenous hunters do target them for their tusks, which can sell for up to $7,000 each. On top of this hunting pressure and occasional ship strikes, narwhals are expected to suffer as sea ice melts across their Arctic habitat.

There are four recognized species of river dolphins, which inhabit rivers and estuaries in Asia and South America, and all are among the most endangered whales on Earth. In fact, one species — the baji, or Chinese river dolphin — was declared “functionally extinct” in 2006. The remaining species are the Amazon river dolphin (pictured), the South Asian river dolphin and the La Plata dolphin, which is the only one to frequent saltwater as well as freshwater. Because rivers are more vulnerable to pollution and hunting than the ocean is — especially when they’re altered by dams — river dolphins are in drastically worse shape than their seafaring cousins.

Even though commercial whalers killed an estimated 1 million sperm whales over the last two centuries, these big-headed cetaceans remain the most abundant of the large whales. Hunters focused on them because of an oily wax they produce called spermaceti, which was even more valuable than whale oil in the days before petroleum drilling. Although the misnamed substance has nothing to do with reproduction (it’s actually part of the whales’ nasal system), the name “sperm whale” stuck. The species itself isn’t in immediate danger, but local populations are — especially in the Gulf of Mexico, where the BP oil spill threatens to clog their blowholes, potentially choking them to death.

Also known as the Gulf of California harbor porpoise, vaquitas are the smallest known cetacean, reaching about 4 feet in length and weighing anywhere from 65 to 120 pounds. They also have one of the smallest ranges, living only in the northern Gulf of California, mainly around the Colorado River delta. Scientists didn’t even know they existed until 1958, but now their already-small population may be dropping as much as 15 percent each year. By far the greatest threat they face is from commercial fishermen, who accidentally reel in 30 to 85 vaquitas as “bycatch” every year.