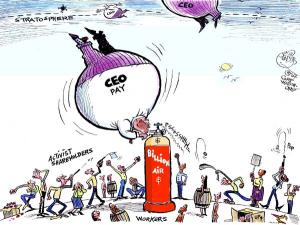 David Tepper, the founder of New Jersey-based Appaloosa Management, was the world’s highest earning hedge fund manager for the second year in a row, according to the Rich List published earlier this month. Tepper earned $3.5 billion in 2013, a major increase on his $2.2 billion take home income in 2012.
All told, in 2013, the highest paid 25 hedge fund managers collectively earned $21.5 billion, also a big leap from $14.14 billion the previous year, according to the annual list compiled by Institutional Investor magazine.

Critics say that these sky-high salaries are a major cause of increasing poverty. “Once upon a time, you might have been able to argue with a straight face that all this wheeling and dealing was productive, that the financial elite was actually providing services to society commensurate with its rewards,” writes Paul Krugman, the Nobel Prize winning economist. “But, at this point, the evidence suggests that hedge funds are a bad deal for everyone except their managers; they don’t deliver high enough returns to justify those huge fees, and they’re a major source of economic instability.”

Following close on the heels of Tepper is Steve Cohen of SAC Capital in Connecticut who was paid $2.4 billion, also a big jump from his $1.4 billion salary in 2012. Cohen’s firm pleaded guilty to insider trading last November and paid out $1.8 billion in fines. SAC Capital was also required to return money to all outside investors, effectively turning it into a personal fund which Cohen has renamed Point72 Asset Management. (Some of Cohen’s employees are allowed to invest also)

Joining Tepper and Cohen in the multi-billion dollar league are John Paulson who made $2.3 billion with his New York-based Paulson & Co’s Recovery Fund in 2013 and James Simons of Renaissance Technologies (also based in New York state) who made $2.2 billion.

In 2011, Raymond Dalio of Bridgewater Associates was paid an estimated $3 billion while Carl Icahn of Icahn Capital Management earned $2 billion. That year, the 25 highest-paid hedge fund managers made $14.4 billion.

Hedge funds are a publicity-shy sector of the financial industry which claim to make above-average profits. They are regulated under the Securities Exchange Act of 1934 and the Investment Company Act of 1940 which restrict how much the fund managers are paid and what they do in order to protect naïve investors. Many hedge funds are designed to get around these restrictions by raising money only from the super wealthy.

For example, most big hedge funds are only open to “qualified purchasers” – who have at least $5 million in money – making them exempt under section 3(c)(7) of the 1940 Securities Exchange Act. Smaller hedge funds seek as many as 100 “accredited investors” – those with a net worth of over $1 million (not including their houses) or a minimum annual income of $200,000 (or $300,000 for married couples) – under the 3(c)(1) of the Investment Company Act of 1940.

Why do hedge fund managers get paid so much? According to Sebastian Mallaby, author of “More Money Than God: Hedge Funds and the Making of a New Elite,” the average hedge fund makes some 11 percent profit, more than double other investment vehicles. This allows fund managers to ask for higher fees than regular bankers – typically they take between one and four percent of the investment every year as well as between 10 and 50 percent of profits in return for attempting to beat the stock market.

Mind you, not everyone agrees that hedge funds are as profitable. A KPMG study concluded that the average hedge fund made a little over 9 percent profit a year, while in “’The Hedge Fund Mirage,” Simon Lack, a former JP Morgan banker, writes that his calculations show that between 2007 and 2011, hedge funds earned just two percent a year. In fact, in 2008, hedge funds lost over 20 percent of their value – rough $450 billion!

But regardless of that little blip in their annual profits, hedge funds are slowly and surely helping the very rich get richer and slowly impoverishing everyone else, helping prove the theories of French superstar economist, Thomas Picketty. “U.S. inequality in 2010 is quantitatively as extreme as in old Europe in the first decade of the twentieth century,” Picketty wrote in his new book, Capital in the 21st Century. The reason, he says, is the rise of “supersalaries” for “supermanagers.”