July 21, 2014 – The 6th BRICS Summit was a resounding success. No previous summit generated greater interest in the global media. While major Western newspapers had consistently neglected the yearly gatherings in the past (or generally described it as a misguided idea), leading global voices such as The Economist and The Financial Times both reported on last week’s meeting.

Despite the summit’s distant location, civil society had a strong presence and organized a fascinating array of events on the sidelines of the summit, involving academics, activists and NGOs that work on human rights and environmental issues. 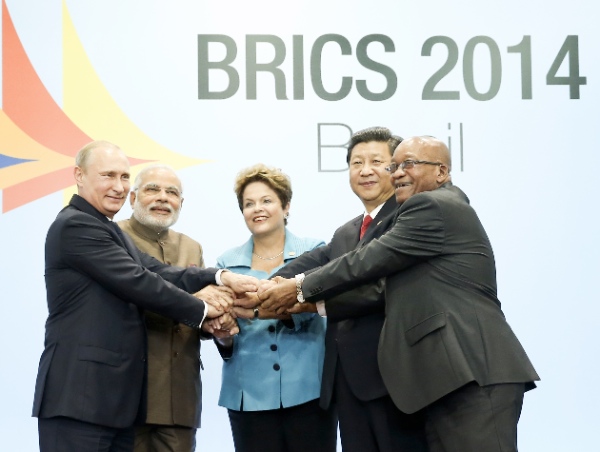 Furthermore, the meeting achieved its main goal, and five years after its first presidential summit in 2009, the BRICS grouping has now finally gained an institutional dimension.

The creation of the BRICS Development Bank and the Contingency Reserve Agreement (CRA) had been discussed for several years, and yet it still comes as a surprise to most Western analysts who consistently argued that the BRICS countries were too different from each other to ever agree on much.

Finally, the sheer quantity of issues mentioned in the Fortaleza Declaration, along with the so-called Action Plan is impressive.

The Russian question, and other challenges

At the same time, parts of the document were roundly criticized. Alan Alexandroff, a Canadian scholar, wrote of the grouping’s “almost breathtaking chutzpah” when condemning unlilateral action, arguing that “no State should strengthen its security at the expense of the security of others”, yet not mentioning Russia’s annexation of Crimea.

It may not have been a coincidence that the US administration announced a new round of economic sanctions against Russia while President Putin was still in Brazil. The BRICS are not an anti-American grouping, but they profoundly differ with the West when it comes to dealing with Russia.

While the Fortaleza summit will be remembered for its institutional achievements, the greatest challenges for the BRICS grouping lie ahead. For the past five years, those supportive of the BRICS idea could argue that exchanging information and learning about each other was enough.

Now, the bar lies considerably higher, and anything but a smoothly operating bank by mid-2016 would be considered a failure. The fact that the agreement about the location of the bank’s headquarters was reached only hours before the signing ceremony underlines that it will take considerable effort to manage intra-BRICS rivalries.

And yet, intense negotiations and clashing interests are normal in any multilateral institution, even those dominated by liberal democracies.

For Brazil, a more institutionalized BRICS grouping will be extremely useful, primarily because it will provide policy makers in Brasília with a constant channel of communication to China’s political leadership. Given Brazil’s limited diplomatic presence in Beijing and its growing economic dependence on China, such direct access is priceless.

Furthermore, the bank will be yet another institutional connection between China and India, whose bilateral relationship will, to small degree, influence the likelihood of war and peace in Asia in the coming decades.

As Russia will assume the BRICS presidency and prepare the 7th Summit in 2015, President Putin may attempt to turn the grouping into a more political alliance.

This makes sense for decision-makers in Moscow, particularly considering that there are no signs that ties between Russia and the West may improve any time soon. As a consequence, Russia is the only member that considers the grouping an absolute foreign policy priority. Without its BRICS partners, Moscow would be totally isolated, forced to give in to Western demands.

For Brazil, South Africa, China and India, on the other hand, the BRICS grouping is a means to diversify their partnerships and occasionally balance the United States, but they are not interested in undermining their ties to the West.

And still, the Fortaleza Declaration can and must be read as a further sign of the diminishing role of Western powers in global affairs and the advent of multi-polarity.

Oliver Stuenkel is professor of international relations at the Getulio Vargas Foundation (FGV) in São Paulo. He is also a non-resident fellow at the Global Public Policy Institute (GPPI) in Berlin.