Test for 10 proteins predicts onset of disease over 12 months in those with mild memory loss with 87% accuracy. 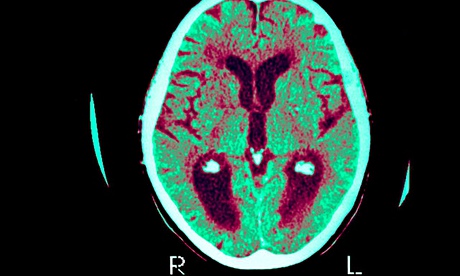 A brain scan of a patient suffering with Alzheimer’s disease. The darker areas show a reduction of function and blood flow. Photograph: Alamy

A blood test to detect which people with failing memories will go on to develop Alzheimer’s disease has been developed by British scientists, who hope it may prove a breakthrough in the hunt for a cure.

After a decade’s work, an international collaboration led by scientists from King’s College London, with the UK company Proteome Sciences, has published a study identifying a set of 10 proteins in the blood. The test can predict the onset of Alzheimer’s in the next 12 months in people with memory problems with an accuracy of 87%. It could cost £100-£300 and be available within two years.

Alzheimer’s and other forms of dementia are distressing and a huge burden on those affected, their families and the NHS. But despite the growing problem as people live longer, there are no good long-term treatments and there is no cure. David Cameron recently announced a drive to discover new drugs for dementia, which he said “stands alongside cancer as one of the greatest enemies of humanity“.

Many trials have ended in failure. As one potential drug after another has fallen by the wayside, scientists have begun to look for ways to treat people at a much earlier stage, when their brain is not so badly damaged. But to do that, they need a test to predict who is going to develop the disease.

A number of research groups have been trying to develop tests. Scientists in the US published details in March of a proposed test for lipids (fatty chemicals) in the blood of people in the general population, who do not have memory problems. Such a screening test would be controversial, however: few healthy people want to know they may be in line for an incurable disease that can be neither prevented nor treated.

The new test is aimed at people with the kind of memory loss called mild cognitive impairment, 60% of whom will go on to develop dementia. Those are the people scientists now want to recruit into trials to prevent, or at least delay, the onset of Alzheimer’s.

“Alzheimer’s begins to affect the brain many years before patients are diagnosed with the disease,” said Professor Simon Lovestone from King’s College. “Many of our drug trials fail because by the time patients are given the drugs, the brain has already been too severely affected.

“A simple blood test could help us identify patients at a much earlier stage to take part in new trials and hopefully develop treatments which could prevent the progression of the disease.”

The researchers investigated 26 proteins which have all been linked to Alzheimer’s in the past. Writing in the journal Alzheimer’s & Dementia, they say they took blood samples from 1,148 individuals, of whom 476 had Alzheimer’s disease, 220 had mild cognitive impairment and 452 were elderly but without dementia.

They found that 16 of the proteins were associated with brain shrinkage either in mild cognitive impairment or Alzheimer’s.

In a second set of tests, they identified 10 proteins whose presence could predict, with a reasonable degree of accuracy, whether people with mild cognitive impairment would develop Alzheimer’s within a year.

Larger trials involving 5,000 to 10,000 people are still needed, say the scientists. “The next step will be to validate our findings in further sample sets, to see if we can improve accuracy and reduce the risk of misdiagnosis, and to develop a reliable test suitable to be used by doctors,” said Lovestone.

Other scientists were enthusiastic about the potential for the test to aid drug discovery, but cautious about its potential use for diagnosing the disease in otherwise healthy people.

Dr Eric Karran, science director at the charity Alzheimer’s Research UK, which helped fund the research, said a test identifying those at risk of Alzheimer’s at an early stage would be of “real value”, but warned that it would have to be used responsibly.

“Alzheimer’s disease is now the most feared diagnosis,” he said. “We have to be very careful about how we use these tests, especially in the absence of effective therapy.”

Dr James Pickett, head of research at the Alzheimer’s Society, said: “Finding a way to detect dementia before symptoms develop would revolutionise research into the condition … However, this research does not mean that a blood test for dementia is just around the corner.

“These 10 proteins can predict conversion to dementia with less than 90% accuracy, meaning one in 10 people would get an incorrect result. Therefore, accuracy would need to be improved before it could be a useful diagnostic test.

“Only through further research will we find answers to the biggest questions around dementia, so we will watch the progress of this study with interest.”