Israel Is Captive to Its ‘Destructive Process’ 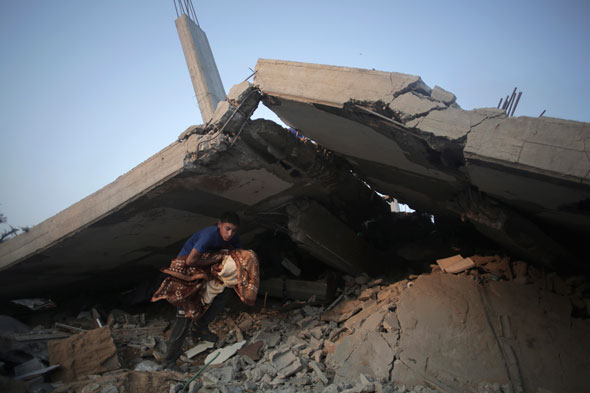 Palestinians salvage what they can of their belongings from the rubble of a house destroyed by an Israeli airstrike in Gaza City. AP/Khalil Hamra

Raul Hilberg in his monumental work “The Destruction of the European Jews” chronicled a process of repression that at first was “relatively mild” but led, step by step, to the Holocaust. It started with legal discrimination and ended with mass murder. “The destructive process was a development that was begun with caution and ended without restraint,” Hilberg wrote.

The Palestinians over the past few decades have endured a similar “destructive process.” They have gradually been stripped of basic civil liberties, robbed of assets including much of their land and often their homes, have suffered from mounting restrictions on their physical movements, been blocked from trading and business, especially the selling of produce, and found themselves increasingly impoverished and finally trapped behind walls and security fences erected around Gaza and the West Bank.

“The process of destruction [of the European Jews] unfolded in a definite pattern,” Hilberg wrote. “It did not, however, proceed from a basic plan. No bureaucrat in 1933 could have predicted what kind of measures would be taken in 1938, nor was it possible in 1938 to foretell the configuration of the undertaking in 1942. The destructive process was a step-by-step operation, and the administrator could seldom see more than one step ahead.”

There will never be transports or extermination camps for the Palestinians, but amid increasing violence against Palestinians larger and larger numbers of them will die, in airstrikes, targeted assassinations and other armed attacks. Hunger and misery will expand. Israeli demands for “transfer”—the forced expulsion of Palestinians from occupied territory to neighboring countries—will grow.

The Palestinians in Gaza live in conditions that now replicate those first imposed on Jews by the Nazis in the ghettos set up throughout Eastern Europe. Palestinians cannot enter or leave Gaza. They are chronically short of food—the World Health Organization estimates that more than 50 percent of children in Gaza and the West Bank under 2 years old have iron deficiency anemia and reports that malnutrition and stunting in children under 5 are “not improving” and could actually be worsening. Palestinians often lack clean water. They are crammed into unsanitary hovels. They do not have access to basic medical care. They are stateless and lack passports or travel documents. They live with massive unemployment. They are daily dehumanized in racist diatribes by their occupiers as criminals, terrorists and mortal enemies of the Jewish people.

Ayelet Shaked, a member of the right-wing Jewish Home Party, on her Facebook page June 30 posted an article written 12 years ago by the late Uri Elitzur, a leader in the settler movement and a onetime adviser to Netanyahu, saying the essay is as “relevant today as it was then.” The article said in part: “They [the Palestinians] are all enemy combatants, and their blood shall be on all their heads. Now this also includes the mothers of the martyrs, who send them to hell with flowers and kisses. They should follow their sons, nothing would be more just. They should go, as should the physical homes in which they raised the snakes. Otherwise, more little snakes will be raised there.”

The belief that a race or class is contaminated is used by ruling elites to justify quarantining the people of that group. But quarantine is only the first step. The despised group can never be redeemed or cured—Hannah Arendt noted that all racists see such contamination as something that can never be eradicated. The fear of the other is stoked by racist leaders such as Netanyahu to create a permanent instability. This instability is exploited by a corrupt power elite that is also seeking the destruction of democratic civil society for all citizens—the goal of the Israeli government (as well as the goal of a U.S. government intent on stripping its own citizens of rights). Max Blumenthal in his book “Goliath: Life and Loathing in Greater Israel” does a masterful job of capturing and dissecting this frightening devolution within Israel.

The last time Israel mounted a Gaza military assault as severe as the current series of attacks was in 2008, with Operation Cast Lead, which lasted from Dec. 27 of that year to Jan. 18, 2009. That attack saw 1,455 Palestinians killed, including 333 children. Roughly 5,000 more Palestinians were injured. A new major ground incursion, which would be designed to punish the Palestinians with even greater ferocity, would cause a far bigger death toll than Operation Cast Lead did. The cycle of escalating violence, this “destructive process,” as the history of the conflict has illustrated, would continue at an accelerating rate.

The late Yeshayahu Leibowitz, one of Israel’s most brilliant scholars, warned that, followed to its logical conclusion, the occupation of the Palestinians would mean “concentration camps would be erected by the Israeli rulers” and “Israel would not deserve to exist, and it will not be worthwhile to preserve it.” He feared the ascendancy of right-wing, religious Jewish nationalists and warned that “religious nationalism is to religion what National Socialism was to socialism.” Leibowitz laid out what occupation would finally bring for Israel:

The Arabs would be the working people and the Jews the administrators, inspectors, officials, and police—mainly secret police. A state ruling a hostile population of 1.5 to 2 million foreigners would necessarily become a secret-police state, with all that this implies for education, free speech and democratic institutions. The corruption characteristic of every colonial regime would also prevail in the State of Israel. The administration would suppress Arab insurgency on the one hand and acquire Arab Quislings on the other. There is also good reason to fear that the Israel Defense Force, which has been until now a people’s army, would, as a result of being transformed into an army of occupation, degenerate, and its commanders, who will have become military governors, resemble their colleagues in other nations.

Israel is currently attacking a population of 1.8 million that has no army, no navy, no air force, no mechanized military units, no command and control and no heavy artillery. Israel pretends that this indiscriminate slaughter is a war. But only the most self-deluded supporter of Israel is fooled. The rockets fired at Israel by Hamas—which is committing a war crime by launching those missiles against the Israeli population—are not remotely comparable to the 1,000-pound iron fragmentation bombs that have been dropped in large numbers on crowded Palestinian neighborhoods; the forced removal of some 300,000 Palestinians from their homes; the more than 160 reported dead—the U.N. estimates that 77 percent of those killed in Gaza have been civilians; the destruction of the basic infrastructure; the growing food and water shortages; and the massing of military forces for a possible major ground assault.

When all this does not work, when it becomes clear that the Palestinians once again have not become dormant and passive, Israel will take another step, more radical than the last. The “process of destruction” will be stopped only from outside Israel. Israel, captive to the process, is incapable of imposing self-restraint.

A mass movement demanding boycotts, divestment and sanctions is the only hope now for the Palestinian people. Such a movement must work for imposition of an arms embargo on Israel; this is especially important for Americans because weapons systems and attack aircraft provided by the U.S. are being used to carry out the assault. It must press within the United States for a cutoff of the $3.1 billion in military aid that the U.S. gives to Israel each year. It must organize to demand suspension of all free trade and other agreements between the U.S. and Israel. Only when these props are knocked out from under Israel will the Israeli leadership be forced, as was the apartheid regime in South Africa, to halt its “destructive process.” As long as these props remain, the Palestinians are doomed. If we fail to act we are complicit in the slaughter.