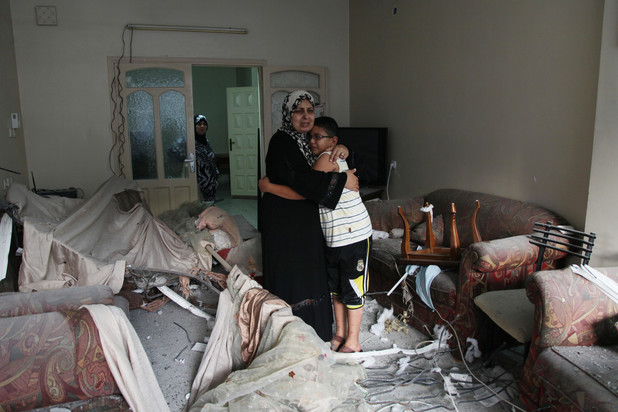 In Gaza, the implementation of the Zionist vision takes its most inhuman form. (Ezz Zanoun / APA images)

In a September 2006 article for The Electronic Intifada, I defined the Israeli policy towards the Gaza Strip as an incremental genocide.

Israel’s present assault on Gaza alas indicates that this policy continues unabated. The term is important since it appropriately locates Israel’s barbaric action — then and now — within a wider historical context.

This context should be insisted upon, since the Israeli propaganda machine attempts again and again to narrate its policies as out of context and turns the pretext it found for every new wave of destruction into the main justification for another spree of indiscriminate slaughter in the killing fields of Palestine.

The Zionist strategy of branding its brutal policies as an ad hoc response to this or that Palestinian action is as old as the Zionist presence in Palestine itself. It was used repeatedly as a justification for implementing the Zionist vision of a future Palestine that has in it very few, if any, native Palestinians.

The means for achieving this goal changed with the years, but the formula has remained the same: whatever the Zionist vision of a Jewish State might be, it can only materialize without any significant number of Palestinians in it. And nowadays the vision is of an Israel stretching over almost the whole of historic Palestine where millions of Palestinians still live.

The present genocidal wave has, like all the previous ones, also a more immediate background. It has been born out of an attempt to foil the Palestinian decision to form a unity government that even the United States could not object to.

The collapse of US Secretary of State John Kerry’s desperate “peace” initiative legitimized the Palestinian appeal to international organizations to stop the occupation. At the same time, Palestinians gained wide international blessing for the cautious attempt represented by the unity government to strategize once again a coordinated policy among the various Palestinian groups and agendas.

Ever since June 1967, Israel searched for a way to keep the territories it occupied that year without incorporating their indigenous Palestinian population into its rights-bearing citizenry. All the while it participated in a “peace process” charade to cover up or buy time for its unilateral colonization policies on the ground.

With the decades, Israel differentiated between areas it wished to control directly and those it would manage indirectly, with the aim in the long run of downsizing the Palestinian population to a minimum with, among other means, ethnic cleansing and economic and geographic strangulation.

The geopolitical location of the West Bank creates the impression in Israel, at least, that it is possible to achieve this without anticipating a third uprising or too much international condemnation.

The Gaza Strip, due to its unique geopolitical location, did not lend itself that easily to such a strategy. Ever since 1994, and even more so when Ariel Sharon came to power as prime minister in the early 2000s, the strategy there was to ghettoize Gaza and somehow hope that the people there — 1.8 million as of today — would be dropped into eternal oblivion.

But the Ghetto proved to be rebellious and unwilling to live under conditions of strangulation, isolation, starvation and economic collapse. So resending it to oblivion necessitates the continuation of genocidal policies.

On 15 May, Israeli forces killed two Palestinian youths in the West Bank town of Beitunia, their cold-blooded slayings by a sniper’s bullet captured on video. Their names — Nadim Nuwara and Muhammad Abu al-Thahir — were added to a long list of such killings in recent months and years.

The killing of three Israeli teenagers, two of them minors, abducted in the occupied West Bank in June, was perhaps in reprisal for killings of Palestinian children. But for all the depredations of the oppressive occupation, it provided the pretext first and foremost for destroying the delicate unity in the West Bank but also for the implementation of the old dream of wiping out Hamas from Gaza so that the Ghetto could be quiet again.

Since 1994, even before the rise of Hamas to power in the Gaza Strip, the very particular geopolitical location of the Strip made it clear that any collective punitive action, such as the one inflicted now, could only be an operation of massive killings and destruction. In other words, of a continued genocide.

This recognition never inhibited the generals who give the orders to bomb the people from the air, the sea and the ground. Downsizing the number of Palestinians all over historic Palestine is still the Zionist vision. In Gaza, its implementation takes its most inhuman form.

The particular timing of this wave is determined, as in the past, by additional considerations. The domestic social unrest of 2011 is still simmering and for a while there was a public demand to cut military expenditures and move money from the inflated “defense” budget to social services. The army branded this possibility as suicidal.

There is nothing like a military operation to stifle any voices calling on the government to cut its military expenses.

Typical hallmarks of the previous stages in this incremental genocide reappear in this wave as well. One can witness again consensual Israeli Jewish support for the massacre of civilians in the Gaza Strip, without one significant voice of dissent. In Tel Aviv, the few who dared to demonstrate against it were beaten by Jewish hooligans, while the police stood by and watched.

Academia, as always, becomes part of the machinery. The prestigious private university, the Interdisciplinary Center Herzliya has established “a civilian headquarters” where students volunteer to serve as mouthpieces in the propaganda campaign abroad.

The media is loyally recruited, showing no pictures of the human catastrophe Israel has wreaked and informing its public that this time, “the world understands us and is behind us.”

That statement is valid to a point as the political elites in the West continue to provide the old immunity to the “Jewish state.” However, the media have not provided Israel with quite the level of legitimacy it was seeking for its criminal policies.

This is not surprising, since pro-Israel lobby groups continue to work tirelessly to press Israel’s case in France and the rest of Europe as they do in the United States.

Whether it is burning alive a Palestinian youth from Jerusalem, or the fatal shooting of two others, just for the fun of it in Beitunia, or slaying whole families in Gaza, these are all acts that can only be perpetrated if the victim is dehumanized.

I will concede that all over the Middle East there are now horrific cases where dehumanization has reaped unimaginable horrors as it does in Gaza today. But there is one crucial difference between these cases and the Israeli brutality: the former are condemned as barbarous and inhuman worldwide, while those committed by Israel are still publicly licensed and approved by the president of the United States, the leaders of the EU and Israel’s other friends in the world.

The only chance for a successful struggle against Zionism in Palestine is the one based on a human and civil rights agenda that does not differentiate between one violation and the other and yet identifies clearly the victim and the victimizers.

Those who commit atrocities in the Arab world against oppressed minorities and helpless communities, as well as the Israelis who commit these crimes against the Palestinian people, should all be judged by the same moral and ethical standards. They are all war criminals, though in the case of Palestine they have been at work longer than anyone else.

It does not really matter what the religious identity is of the people who commit the atrocities or in the name of which religion they purport to speak. Whether they call themselves jihadists, Judaists or Zionists, they should be treated in the same way.

A world that would stop employing double standards in its dealings with Israel is a world that could be far more effective in its response to war crimes elsewhere in the world.

Cessation of the incremental genocide in Gaza and the restitution of the basic human and civil rights of Palestinians wherever they are, including the right of return, is the only way to open a new vista for a productive international intervention in the Middle East as a whole.

The author of numerous books, Ilan Pappe is professor of history and director of the European Centre for Palestine Studies at the University of Exeter.