It Was Putin’s Missile! 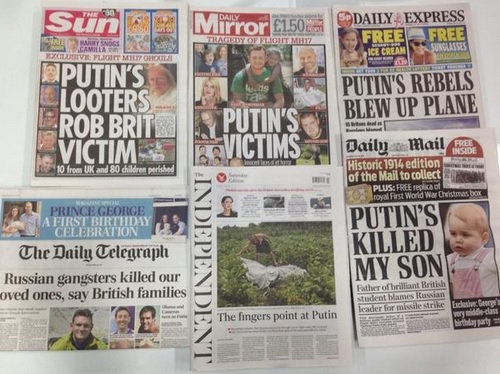 And here’s the spin war verdict: the current Malaysia Airlines tragedy – the second in four months – is “terrorism” perpetrated by “pro-Russian separatists”, armed by Russia, and Vladimir Putin is the main culprit. End of story. Anyone who believes otherwise, shut up.

Why? Because the CIA said so. Because Hillary “We came, we saw, he died” Clinton said so. Because batshit crazy Samantha “R2P” Power said so – thundering at the UN, everything duly printed by the neo-con infested Washington Post. [1]

Because Anglo-American corporate media – from CNN to Fox (who tried to buy Time Warner, which owns CNN) – said so. Because the President of the United States (POTUS) said so. And mostly because Kiev had vociferously said so in the first place.

Right off the bat they were all lined up – the invariably hysterical reams of “experts” of the “US intelligence community” literally foaming at their palatial mouths at “evil” Russia and “evil” Putin; intel “experts” who could not identify a convoy of gleaming white Toyotas crossing the Iraqi desert to take Mosul. And yet they have already sentenced they don’t need to look any further, instantly solving the MH17 riddle.

It doesn’t matter that President Putin has stressed the MH17 tragedy must be investigated objectively. And “objectively” certainly does not mean that fictional “international community” notion construed by Washington – the usual congregation of pliable vassals/patsies.

And what about Carlos?

A simple search at reveals that MH17 was in fact diverted 200 kilometers north from the usual flight path taken by Malaysia Airlines in the previous days – and plunged right in the middle of a war zone. Why? What sort of communication MH17 received from Kiev air control tower?

Kiev has been mute about it. Yet the answer would be simple, had Kiev released the Air Traffic Control recording of the tower talking to flight MH17; Malaysia did it after flight MH370 disappeared forever.

It won’t happen; SBU security confiscated it. So much for getting an undoctored explanation on why MH17 was off its path, and what the pilots saw and said before the explosion.

The Russian Defense Ministry, for its part, has confirmed that a Kiev-controlled Buk anti-aircraft missile battery was operational near the MH17’s crash. Kiev has deployed several batteries of Buk surface-to-air missile systems with at least 27 launchers; these are all perfectly capable of bringing down jets flying at 33,000 ft.

Radiation from a battery’s Kupol radar, deployed as part of a Buk-M1 battery near Styla (a village some 30km south of Donetsk) was detected by the Russian military. According to the ministry, the radar could be providing tracking information to another battery which was at a firing distance from MH17’s flight path. The tracking radar range on the Buk system is a maximum of 50 miles. MH17 was flying at 500 mph. So assuming the “rebels” had an operational Buk and did it, they would have had not more than five minutes to scan all the skies above, all possible altitudes, and then lock on. By then they would have known that a cargo plane could not possibly be flying that high. For evidence supporting the possibility of a false flag, check here.

And then there’s the curiouser and curiouser story of Carlos, the Spanish air traffic controller working at Kiev’s tower, who was following MH17 in real time. For some Carlos is legit – not a cipher; for others, he’s never even worked in Ukraine. Anyway he tweeted like mad. His account – not accidentally – has been shut down, and he has disappeared; his friends are now desperately looking for him. I managed to read all his tweets in Spanish when the account was still online – and now copies and an English translation are available.

These are some of his crucial tweets:

Carlos’s assessment (a partial compilation of his tweets is collected here http://slavyangrad.wordpress.com/2014/07/18/spanish-air-controller-kiev-borispol-airport-ukraine-military-shot-down-boeing-mh17/ ): the missile was fired by the Ukraine military under orders of the Ministry of Interior – NOT the Ministry of Defense. Security matters at the Ministry of the Interior happen to be under Andriy Parubiy, who was closely working alongside US neo-cons and Banderastan neo-nazis on Maidan.

Assuming Carlos is legit, the assessment makes sense. The Ukrainian military are divided between Chocolate king President Petro Poroshenko – who would like a d?tente with Russia essentially to advance his shady business interests – and Saint Yulia Timoshenko, who’s on the record advocating genocide of ethnic Russians in Eastern Ukraine. US neo-cons and US “military advisers” on the ground are proverbially hedging their bets, supporting both the Poroshenko and Timoshenko factions.

The key question remains, of course, cui bono? Only the terminally brain dead believe shooting a passenger jet benefits the federalists in Eastern Ukraine, not to mention the Kremlin.

As for Kiev, they’d have the means, the motive and the window of opportunity to pull it off – especially after Kiev’s militias have been effectively routed, and were in retreat, in the Donbass; and this after Kiev remained dead set on attacking and bombing the population of Eastern Ukraine even from above. No wonder the federalists had to defend themselves.

And then there’s the suspicious timing. The MH17 tragedy happened two days after the BRICS announced an antidote to the IMF and the World Bank, bypassing the US dollar. And just as Israel “cautiously” advances its new invasion/slow motion ethnic cleansing of Gaza. Malaysia, by the way, is the seat of the Kuala Lumpur War Crimes Commission, which has found Israel guilty of crimes against humanity.

Washington, of course, does profit. What the Empire of Chaos gets in this case is a ceasefire (so the disorganized, battered Kiev militias may be resupplied); the branding of Eastern Ukrainians as de facto “terrorists” (as Kiev, Dick Cheney-style, always wanted); and unlimited mud thrown over Russia and Putin in particular until Kingdom Come. Not bad for a few minutes’ work. As for NATO, that’s Christmas in July.

From now on, it all depends on Russian intelligence. They have been surveying/tracking everything that happens in Ukraine 24/7. In the next 72 hours, after poring over a lot of tracking data, using telemetry, radar and satellite tracking, they will know which type of missile was launched, where from, and even produce communications from the battery that launched it. And they will have access to forensic evidence.

Unlike Washington – who already knows everything, with no evidence whatsoever (remember 9/11?) – Moscow will take its time to know the basic journalistic facts of what, where, and who, and engage on proving the truth and/or disproving Washington’s spin.

The historical record shows Washington simply won’t release data if it points to a missile coming from its Kiev vassals. The data may even point to a bomb planted on MH17, or mechanical failure – although that’s unlikely. If this was a terrible mistake by the Novorossiya rebels, Moscow will have to reluctantly admit it. If Kiev did it, the revelation will be instantaneous. Anyway we already know the hysterical Western response, no matter what; Russia is to blame.

Putin is more than correct when he stressed this tragedy would not have happened if Poroshenko had agreed to extend a cease-fire, as Merkel, Hollande and Putin tried to convince him in late June. At a minimum, Kiev is already guilty because they are responsible for safe passage of flights in the airspace they – theoretically – control.

But all that is already forgotten in the fog of war, tragedy and hype. As for Washington’s hysterical claims of credibility, I leave you with just one number: Iran Air 655.