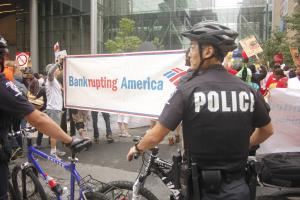 Bank of America has agreed to pay the government $9.65 billion to settle charges of misleading investors over mortgage lending in the run up to the 2008 financial crisis. The bank will also pay out an additional $7 billion to help borrowers and communities affected by the loans.

The settlement agreement was hammered out by the U.S. Department of Justice, the Securities and Exchange Commission and the attorney generals of six states – California, Kentucky, New Jersey, New York, North Carolina and Maryland. Similar large multi billion dollar settlements over mortgage related fraud have recently been reached with JP Morgan and Citigroup for$13 billion and $7 billion respectively.

The government argued that the banks essentially loaned large sums of money to unqualified home buyers, then resold the bad mortgages to investors, before the borrowers defaulted on them.

“These financial institutions knowingly, routinely, falsely, and fraudulently marked and sold these loans as sound and reliable investments,” said Eric Holder, the U.S. attorney general, at a press conference, where the settlement was announced. “Worse still, on multiple occasions – when confronted with concerns about their reckless practices – bankers at these institutions continued to mislead investors about their own standards and to securitize loans with fundamental credit, compliance, and legal defects.”

“It’s kind of like going to your neighborhood grocery store to buy milk advertised as fresh, only to discover that store employees knew the milk you were buying had been left out on the loading dock, unrefrigerated, the entire day before, yet they never told you,” Tony West, associate attorney general, added.

Central to the settlements is the role of Countrywide Financial, which Bank of America bought in 2008 for $2.5 billion. The largest lender of so-called “subprime” mortgages in the U.S., Countrywide was well aware that the loans were likely to fail, according to evidence discovered by government investigators.

“The simple reason is that when the loan resets in five years there will be enormous payment shock and the borrower is not sufficiently sophisticated to truly understand the consequences, then the bank will be dealing with foreclosure in potentially a deflated real-estate market. This would be both a financial and reputational catastrophe,” wrote Angelo Mozilo, the co-founder of Countrywide, in an August 1, 2005 email to other bank executives.

Part of the settlement requires Bank of America to pay down mortgages for certain home owners; reduce tax payments for others; and pay to demolish abandoned homes in certain neighborhoods to reduce urban blight.

All told Bank of America’s total costs for the mortgage crisis are now approaching some $70 billion including paying out $11.8 billion in penalties in February 2012 to settle charges of foreclosure abuses, and $9.3 billion in March 2014 for mis-selling mortgage backed securities. The bank has also set aside $37.3 billion to buy back bad mortgages from investors. (The Wall Street Journal notes that this sum is just slightly greater than total profits reported by the bank between 2004 and 2007) It is still battling charges of selling fraudulent loans to Fannie Mae (Federal National Mortgage Association) and Freddie Mac (Federal Home Loan Mortgage Corporation)

Bank of America says it is now ready to move on. “We believe this settlement, which resolves significant remaining mortgage-related exposures, is in the best interests of our shareholders, and allows us to continue to focus on the future,” said Brian Moynihan, Bank of America’s chief executive, in a statement to the media.

Critics have noted that no senior bank executives have been prosecuted, let alone gone to jail.

“There is another shoe that needs to drop before we can assess this settlement,” John Coffee, a Columbia University law professor, told the Guardian newspaper. “This is the largest fine but yet again we have seen an inability, or a reluctance, to name and go after the individuals responsible.”

However, Bloomberg reports that Mozilo may yet face civil charges from Los Angeles prosecutors, in the not too distant future.