Hashtag Genocide: Why Gaza Fought Back 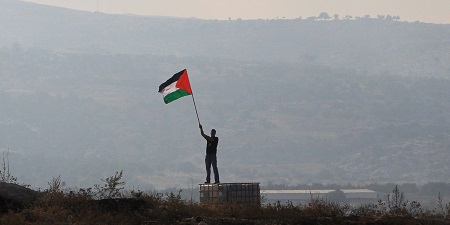 My old family house in the Nuseirat refugee camp in Gaza was recently rebuilt by its new owner, into a beautiful three-story building with large windows adorned by red frames. In Israel’s most recent and deadliest war on Gaza, the house sustained significant damage. A large hole caused by Israeli missiles can be seen from afar, in a part of the house where our kitchen once stood.

It seems that the original target was not my house, however, but that of our kindly neighbor, who had spent his entire working-life toiling between manual jobs in Israel, and later in life as a janitor for UN-operated schools in Gaza. The man’s whole lifesavings were invested in his house where several families lived. After “warning” rockets blew up part of his house, several missiles pulverized the rest.

My entire neighborhood was also destroyed. I saw photos of the wreckage-filled neighborhood by accident on Facebook. The clearance where we played football as little kids was filled with holes left by missiles and shrapnel. The shop where I used my allowance to buy candy, was blown up. Even the graveyard where our dead were meant to “rest in peace” was anything but peaceful. Signs of war and destruction were everywhere.

My last visit there was about two years ago. I caught up with my neighbors on the latest politics and the news of who was dead and who was still alive underneath the shady wall of my old house. One complained about his latest ailments, telling me that his son Mahmoud had been killed as he had been a freedom fighter with a Palestinian resistance movement.

I couldn’t fathom the idea that Mahmoud, the child I remembered as running around half-naked with a runny nose, had become a fierce fighter with an automatic rifle ready to take on the Israeli army. But that he was, and he was killed on duty.

Time changes everything. Time has changed Gaza. But the strip was never a passive place of people subsisting on hand-outs or a pervasive sense of victimhood. Being a freedom fighter preceded any rational thinking about life and the many choices it had to offer growing up in a refugee camp, and all the little kids of my generation wanted to join the Fedayeen.

But options for Gazans are becoming much more limited than ever before, even for my generation.

Since Israel besieged Gaza with Egypt’s help and coordination, life for Gazans has become largely about mere survival. The strip has been turned into a massive ground for an Israeli experiment concerned with population control. Gazans were not allowed to venture out, fish, or farm, and those who got even close to some arbitrary “buffer zone,” determined by the Israeli army within Gaza’s own borders, were shot and often killed.

With time the population of the strip knew that they were alone. The short stint that brought Mohammed Morsi to power in Egypt offered Gaza some hope and a respite, but it soon ended. The siege, after the overthrow of Morsi became tighter than ever before.

The Palestinian leadership in Ramallah did very little to help Gaza. To ensure the demise of Hamas, Mahmoud Abbas’ Palestinian Authority carried on with its “security coordination” with Israel, as Gaza suffered a Draconian siege. There was no question, that after all the failed attempts at breaking the siege and the growing isolation of Gaza, Gazans had to find their own way out of the blockade.

When Israeli began its bombardment campaign of Gaza on July 6, and a day later with the official launch of the so-called Operation Protective Edge, followed by a ground invasion, it may have seemed that Gaza was ready to surrender.

Political analysts have been advising that Hamas has been at its weakest following the downturn of the Arab Spring, the loss of its Egyptian allies, and the dramatic shift of its fortunes in Syria and, naturally Iran. The “Hamas is ready to fold” theory was advanced by the logic surrounding the unity agreement between Hamas and Fatah; and unity was seen largely as a concession by Hamas to Abbas’ Fatah movement, which continued to enjoy western political backing and monetary support.

The killing of three Israeli settlers in the occupied West Bank in late June was the opportunity for Israeli Prime Minister Benjamin Netanyahu to test the misleading theory on Hamas’ weakened position. He launched his war that eventually mounted into a genocide, hoping that Hamas and other resistance groups would be forced to disarm or be completely eradicated – as promised by various Israeli officials.

But it didn’t. From the very first days of the war it became clear the resistance could not be defeated, at least not as easily as Netanyahu had expected. The more troops he invested in the war on Gaza, the more Israeli army casualties increased. Netanyahu’s response was to increase the price of Palestinian resistance by inflicting as much harm on Palestinian civilians as possible: He killed over 1,900, wounded nearly 10,000, a vast majority of whom were civilians, and destroyed numerous schools, mosques, hospitals, and thousands of homes, thus sending hundreds of thousands of people on the run. But where does one run when there is nowhere to go?

“The more extreme of the extreme amongst the Zionists say out loud that the Palestinians have to be wiped out or at the very least driven into Sinai,” he wrote, citing Moshe Feiglin, the deputy of the Israeli Knesset, who called for “full military conquest of the Gaza strip and the expulsion of its inhabitants. They would be held in tent encampments along the Sinai border while their final destination was decided. Those who continued to resist would be exterminated.”

From Israeli commentator Yochanan Gordon, who flirted with genocide in “when genocide is permissible,” to Ayelet Shaked, who advocated the killing of the mothers of those who resist and are killed by Israel. “They should follow their sons. Nothing would be more just. They should go as should the physical houses in which they raised the snakes. Otherwise more little snakes are raised,” he wrote on Facebook.

References to genocide and extermination and other devastatingly violent language are no longer “claims” levied by Israeli critics, but a loud and daily self-indictment made by the Israelis themselves.

The Israelis are losing control of their decades-long hasbara, a propaganda scheme so carefully knitted and implemented, many the world over were fooled by it. Palestinians, those in Gaza in particular, were never blind to Israel’s genocidal intentions. They assembled their resistance with the full knowledge that a fight for their very survival awaited.

Israel’s so-called Protective Edge is the final proof of Israel’s unabashed face, that of genocide. It carried it out, this time paying little attention to the fact that the whole world was watching. Trending Twitter hashtags which began with #GazaUnderAttack, then #GazaResists, quickly morphed to #GazaHolocaust. The latter was used by many that never thought they would dare make such comparisons.

Gaza managed to keep Israel at bay in a battle of historic proportions. Once its children are buried, it will once again rebuild its defenses for the next battle. For Palestinians in Gaza, this is not about mere resistance strategies, but their very survival.

Ramzy Baroud is a PhD scholar in People’s History at the University of Exeter. He is the Managing Editor of Middle East Eye. Baroud is an internationally-syndicated columnist, a media consultant, an author and the founder of PalestineChronicle.com. His latest book is My Father Was a Freedom Fighter: Gaza’s Untold Story (Pluto Press, London).