Political Europe Suppressed Under Washington’s Thumb Is Waking Up

In the aftermath of the downing of the Malaysian airliner in Ukraine, the Western media followed Washington’s lead and manipulated reports in order to make Europeans believe that Russia and Russian-supported separatists in eastern Ukraine were responsible for downing the airliner. In Germany, the press was an extension of Washington’s propaganda machine despite the lack of evidence from both Washington and Kiev to support their irresponsible claims.

It was not long, however, before the public mood in Europe began to turn. A pivotal factor was openly voiced U.S. threats in a law that had been passed by both the House of Representatives and the Senate of the U.S. Congress that could eventually result in an invasion of the Netherlands by United States army forces. http://www.spiegel.de/politik/ausland/internationales-strafgericht-us-kongress-droht-niederlanden-mit-invasion-a-200430.html

When this was learned outrage was expressed not only within the Dutch government, but also among the population of the country. According to the law, if it should ever happen that American citizens are brought before the International Criminal Court (ICC) and accused at The Hague, Washington would exercise the preemptive right to invade the country in order to prevent prosecution.

Remember that Malaysia’s government had permitted a tribunal in 2011, whose judges in the tradition of British court proceedings condemned both George W. Bush and Tony Blair as war criminals. http://www.aljazeera.com/indepth/opinion/2011/11/20111128105712109215.html Some Europeans are asking if there could be a connection between the ruling of this tribunal and the loss of two Malaysian airliners.

In addition, alert and intelligent Europeans have caught on to Washington’s campaign to demonize Russia. A Dutch group of professors sent an open letter to Russian president Vladimir Putin on August 12 in which the signatories officially apologized for the propaganda lies sprewed by Western media. http://futuristrendcast.wordpress.com/2014/08/05/an-open-letter-from-the-netherlands-to-putin-we-are-sorry/

The former “quality media” in Europe have lost the confidence of readers. A growing number of Europeans relying on Internet sites such as www.paulcraigroberts.org are quite well informed about the propagandistic nature of the Western mainstream media.

The chart recently published by a leading German newspaper Frankfurter Allgemeine Zeitung (FAZ) indicates that for one reason or the other, Germans have turned away from German newspapers. The cumulative sales of German newspapers reached their climax back in the year 1983 – with a circulation of 30.1 million copies. 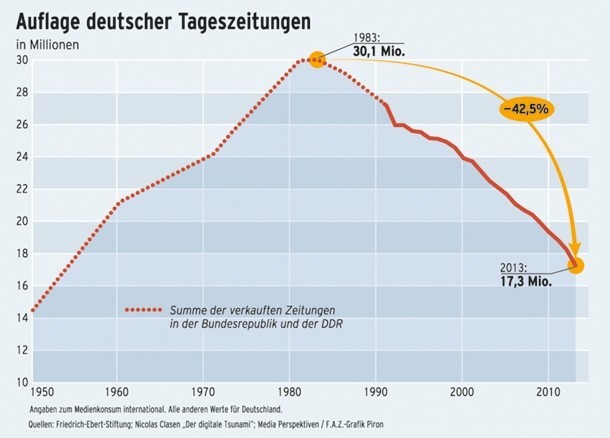 Ever since, things have been deteriorating. In 2013, the circulation shrank to only 17.3 million sold copies – a significant decline of 42.5%, which really hurts many publishers. Persistent cost-reduction programs, massive job cuts and the demise of daily newspapers such as the Financial Times Deutschland are the consequence of newspapers in vassalage to Washington. Many excuses are made for the decline, but the real reason is that German newspapers no longer take
their readers seriously

Germans wonder why their reunited country is still occupied by US troops 69 years after the end of World War II, why their country has no foreign policy independent of Washington, and why the German media provides no public discussion of these highly unusual characteristics of an allegedly sovereign state.

During the last several years the media’s propagandistic character has led to massive resistance among newspaper readers, especially in Germany. You only have to take a look at the comments published on Internet sites of the mainstream media to see angry and disappointed readers turn away from their once favorite newspapers that are accused of actively participating in Washington´s propaganda campaign. Readers see propaganda instead of investigative journalism. In place of evidence and honest reports, there are insinuations and ridiculous accusations. The German newspaper Die Welt even blamed the outbreak of the ebola virus on Russia! http://www.welt.de/politik/ausland/article131459175/Russland-hat-Ebola-zur-Waffe-gemacht.html

Given the danger of Washington pushing Europe into war with Russia, one can be glad that so many Europeans see through the perfidious propaganda lies spread by the mainstream media. Internet sites now perform the role abandoned by newspapers. These mainly independent internet media refer to themselves as alternative media, which have the goal to provide objective and truthful information in place of propaganda.

Some of the large German newspapers destroyed what little credibility they had left when they used social media to spread their claim that the negative comments on their websites were written by people on the payroll of Vladimir Putin. One doesn’t know whether to laugh or cry over this grotesque assertion.

The unanswered question is why does German mainstream media serve Washington instead of Germany? Does Washington pay well for propaganda services?

If we now come to the recent events in Ferguson, these incidents made us realize that the U.S. police state is not just on the rise, but is already in place! Scenes on TV and Internet videos of brutal militarized police equipped for battlefield combat applying extreme violence to protesters and journalists alike has raised the question in Europe whether America is a democracy or a police state. The continuing American massacre of people in the Middle East, together with Washington’s support for Israel’s massacre of Palestinians and now the massacre of Russians in eastern and southern Ukraine by the government that Washington installed in Kiev have changed the image of America from white hat to black hat. America no longer reassures us; America frightens us.

In a recent story Die Welt journalist Ansgar Graw wrote: “The day when the U.S. police became my enemy.”

German journalists who have been living in the United States for 15 years are telling their readers that they have come to the decision to leave the US. They report that things have changed for the worse in the “land of the free” since 9/11, and that they were threatened, handcuffed and arrested for covering the protests in Ferguson.

The policeman who killed the 18-year old black man set off protests, the response to which opened the world’s eyes to the transformation of America into a police state. A country whose military bases occupy much of the world in the name of human rights and freedom, a country that violently interferes in internal affairs of sovereign nations and fights wars at its leisure is now perceived as waging war against its own oppressed propulation. By arrogantly exempting itself from the standards it applies to everyone else, the US has destroyed its credibility.

Now the Dutch wait for the appearance of US troops to show up at the Hague should international law ever be applied to Washington’s war criminals. As one German magazine put it recently, “with friends like America, we don’t need enemies.”