Fabrications and Omissions Supportive of US-NATO Agenda Directed against Russia

The absence of America’s so-called “intelligence” regarding the downing of Malaysia Airlines MH17 over Ukraine in a 34 page Dutch Safety Board preliminary report raises serious questions about the credibility and legitimacy of both America’s political agenda, and all agencies, organizations, and political parties currently behind it.

The report titled, “Preliminary Report: Crash involving Malaysia Airlines Boeing 777-200 flight MH17″ (.pdf), cites a wide variety of evidence in its attempt to determine the cause of flight MH17′s crash and to prevent similar accidents or incidents from occurring again in the future. Among this evidence includes the cockpit voice recorder (CVR), the flight data recorder (FDR), analysis of recorded air traffic control (ATC) surveillance data and radio communication, analysis of the meteorological circumstances, forensic examination of the wreckage (if recovered and possible foreign objects if found), results of the pathological investigation, and analysis of the in-flight break up sequence.

Satellite images are referenced in regards to analyzing the crash site after the disaster, however, no where in the report is mentioned any evidence whatsoever of satellite images of missile launchers, intelligence from the United States regarding missile launches, or any information or evidence at all in any regard suggesting a missile had destroyed MH17. In fact, the report concludes by stating:

This report is preliminary. The information must necessarily be regarded as tentative and subject to alternation or correction if additional evidence becomes available. Further work will at least include the following areas of interest to substantiate the factual information regarding:

With the black boxes in hand and a wealth of data from multiple sources both onboard the aircraft and from the ground in both Ukraine and Russia, the Dutch Safety Board was still hesitant to draw any conclusions and insisted that none be jumped to.

The report specifically mentions information collected from Russia, including air traffic control and radar data – both of which were publicly shared by Russia in the aftermath of the disaster. The report also cites data collected from Ukraine air traffic controllers. The United States however, apart from providing technical information about the aircraft itself considering it was manufactured in the US, provided absolutely no data in any regard according to the report.

Missing US Intel Points to Fabrications 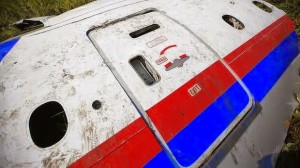 Had the US actually possessed any credible information to substantiate its claims that MH17 was shot down by a missile, such evidence surely would have been submitted to and included in the Dutch Safety Board’s preliminary reporting. That it is predictably missing confirms what commentators, analysts, and politicians around the world had long since suspected – the West’s premature conclusions regarding MH17′s demise were driven by a political agenda, not a factually based search for the truth. The evidence that MH17 was shot down by a missile as the West insisted is missing because it never existed in the first place.

That the Dutch Safety Board possesses such a vast amount of information but is still unable to draw anything but the most tentative conclusions, exposes the alleged certainty of Western pundits and politicians in the hours and days after MH17′s loss as an utterly irresponsible, politically motivated, exploitation of tragedy at best, and at worst, exposing the West – NATO in particular – as possible suspects in a crime they clearly stood the most to benefit from.

In the wake of the MH17 tragedy, the West would rush through a series of sanctions against Russia as well as justify further military aid for the regime in Kiev, Ukraine and the literal Neo-Nazi militant battalions serving its pro-Western agenda amid a brutal civil war raging in the country’s eastern most provinces. With sanctions in hand, and the war raging on in earnest, the MH17 disaster dropped entirely out of Western narratives as if it never occurred. Surely if the West had solid evidence implicating eastern Ukrainian rebels and/or Russia, the world would never have heard the end of the MH17 disaster until the truth was fully aired before the public.

When Dutch investigators published their preliminary report, the West merely reiterated its original claims, simply imposing their contradictory nature upon the report – most likely believing the public would never actually read its 34 pages.

For example, Reuters in a report titled, “Malaysia: Dutch report suggests MH-17 shot down from ground,” would brazenly claim:

Malaysia Airlines flight MH17 broke apart over Ukraine due to impact from a large number of fragments, the Dutch Safety Board said on Tuesday, in a report that Malaysia’s prime minister and several experts said suggested it was shot down from the ground.

The title of Reuters’ propaganda piece directly contradicts its first paragraph which reveals “experts,” not the actual Dutch Safety Board report, claimed it was “shot down from the ground,” while the report itself says nothing of the sort. The experts cited by Reuters in fact had no association whatsoever with the preliminary report and instead are the same mainstay of cherry picked commentators the West constantly defers to while building up and perpetuating utterly fabricated narratives to advance its agenda globally.

The lesson to be learned from the MH17 disaster is that real investigations and their subsequent conclusions take time – weeks or even months. Anyone drawing immediate conclusions within hours or days after an event like the MH17 disaster are exploiting tragedy at best, and at worst implicate themselves as suspects having created it in the first place to serve as impetus for further chaos, conflict, and confusion.

Those incapable of resisting the need to jump to conclusions are those who are least suitable to lead. The United States, United Kingdom, and the European Union have proven beyond a shadow of a doubt that they are at best tasteless, irresponsible, politically motivated exploiters of human tragedy, and at worst, the prime suspects of a heinous act of mass murder aimed at perpetuating their agenda of war and carnage in Ukraine and beyond.