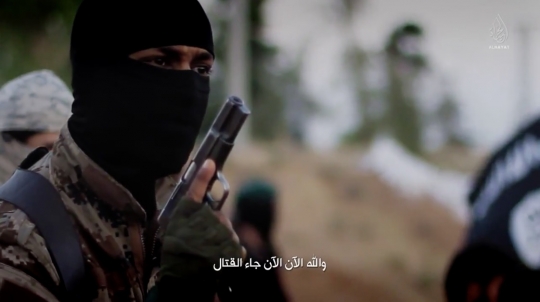 The militant group Islamic State released a slick and disturbing new propaganda film, “Flames of War,” narrated entirely in English and featuring an Islamic State fighter who speaks with an American or Canadian accent.

“The flames of war are only beginning to intensify. Wallahi, the fighting has just begun,” the fighter says before he turns to execute a group of Syrian Army soldiers just forced to dig their own graves on camera.

A prominent linguistics professor told The Intercept that while the fighter was probably not a native English speaker, his accent is likely from either Canada or the northern areas of Minnesota and North Dakota. The degree of fluency indicated the fighter must have either lived for an extended time or been raised in North America, as opposed to being raised by North American parents abroad. The professor asked to remain anonymous due to this being a provisional opinion based on a short and low-quality segment of audio. (The fighter begins to speak in English around 51 minutes and 15 seconds into the video. A disturbing execution scene follows, just past the 54-minute mark.)

The Islamic State, also known as ISIS, is believed to have attracted some American recruits, but its videos have not highlighted such fighters.

The 55-minute film, at least the second full-length movie from the group, appears specifically designed to target potential recruits in Western countries. Opening with scenes of the American invasion of Iraq and a speech by former President George W. Bush infamously declaring “victory” in that war, it provides high-quality combat footage of recent ISIS victories over rival Syrian opposition groups, the Assad regime, and Kurdish militant factions in Iraq and Syria. In one scene, shaky camera footage of the White House is briefly shown.

The film also criticizes media organizations such as CNN, RT and Al Jazeera for allegedly defaming the group and derides prominent Islamic scholars for their public denunciations of its practices and ideology. Hassan Abboud, the recently assassinated leader of the Syrian Islamic Front rebel group Ahrar al Sham, is depicted in one segment as an American stooge.

Throughout the film, the narrator describes in flawless English a litany of recent military triumphs by Islamic State fighters as well as tactics and and equipment they’ve employed in combat. ISIS fighters can be seen utilizing heavy armor and rocket-propelled grenades while engaged in house-to-house fighting with Kurdish and Syrian opposition factions. Scenes of mass executions of Iraqi and Syrian Army soldiers are shown, with one particularly graphic segment depicting the shooting deaths of several regime soldiers on the back of an army truck near Tabqa Airforce Base in Northern Syria.

Similar to previous videos released by the group, this film employs sophisticated videography in an attempt to glamorize the group’s operations. Slow-motion footage, filtered lenses and sound effects all combine to give the film distinctly professional production values. The comparison between sophisticated ISIS propaganda such as this and the types of grainy footage put out by past Al Qaeda franchises could not be more pronounced. At one point, an Iraqi Army soldier can be seen shot with a pistol from the point-of-view of the executioner. Combined with freeze frames and visual effects, the scene seems more intended to mimic a first-person shooter video game than anything resembling actual combat.

In the final passages, the masked ISIS fighter with the North American accent denounces the Syrian regime, while Syrian soldiers in civilian clothes can be seen digging their own graves in the background. The scene then cuts to a Syrian soldier denouncing the leadership of Bashar Assad and urging Syrian families to pull their sons from the government army. Finally, the American fighter along with a group of others pulls out a handgun – a scene dramatized with a slow motion close-up of his weapon – and turns to execute several the soldiers, whose lifeless bodies roll into a trench.

The use of English-narration for this film and the focus placed upon an English-speaking fighter with the group appears to be a calculated attempt to solicit recruits in Western countries. And trailers had suggested the film would primarily constitute a direct message to the United States. But for the most part the threats contained within the video seem directed towards the enemies of the Islamic State within the Muslim world. In particular, promises are made of future attacks again “Nusayri forces” and “Sahwat” – a reference to Syrian regime forces and rival Sunni Arab factions.

“Finally this is a message we direct to America…a proxy war won’t help you in [Syria] just as it didn’t in Iraq… As for the near future, you will be forced into a direct confrontation…despite your reluctance. So wait and see, for we too [will] wait and see.”

Update: YouTube pulled the video. You can find the portion with the Canadian/American-sounding fighter here.

Correction: The original version of this post mis-stated the affiliation of Hassan Abboud. It has been updated to reflect that he was the leader of Ahrar al Sham. Sept. 19, 2014.

With reporting from Peter Maass.