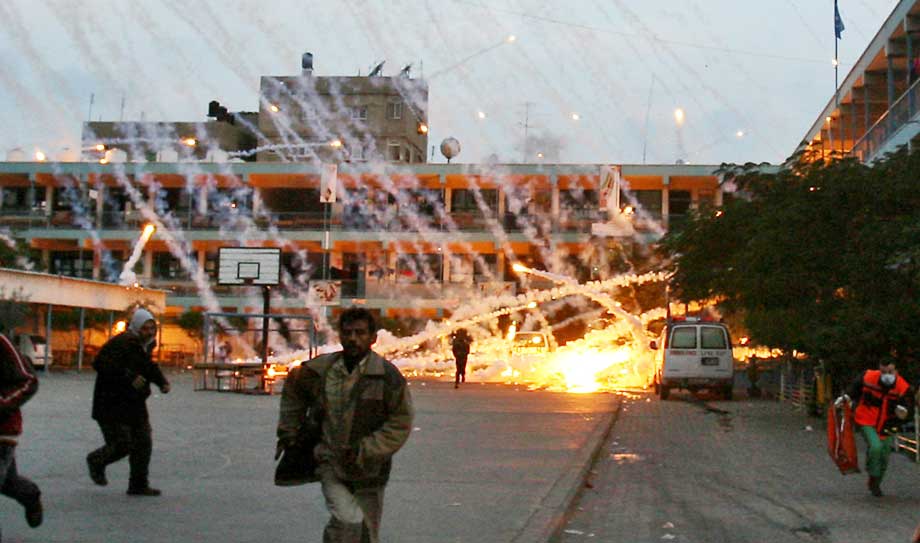 The arms trade is the biggest money generating business in the whole world. It is estimated that this business generates a conservative profit of $1.5 trillion a year. Yet like any other manufactured products arms industries need welcoming markets, research and development facilities, testing fields, and marketing campaigns.

The largest weapon traders are the five permanent members of the United Nation Security Council (UNSC); USA, UK, France, Russia and China. Germany is also becoming a large exporter of weapons. Lately, Israel; a very small state compared to the latter six countries, is aggressively growing into a major weapons manufacturer and exporter. Some experts consider Israel as the sixth largest weapon trader, while others consider it the fourth.

The economy of these countries is partially or wholly dependent on the arms industry. Thus the UNSC has been rendered ineffective in restoring peace and security. Its member countries are not adopting peaceful resolutions and relationships between countries, rather resort to unfair policies that increase conflicts and threats leading to more military confrontations and wars. These armed conflicts are largely created by the US and EU, who are encouraging the rise of dictators and unpopular regimes that need weaponry to control its own people, then the toppling of these governments and the rise of others, and lately the financing and arming terrorist groups, especially in the Middle Eastern region, to create and perpetuate a state of war where warring governments need weapons to defend themselves. This generates good business to weapons manufacturers.

The American economy had shifted sharply into military industries, where the budget of certain of its states, such as California, depend mainly on weapons manufacturing. The American military budget is the largest budget in the world dwarfing the sums of military budgets of all other countries of the world. American economy, now-a-days, is a military economy that provides jobs for millions of Americans. The American weapons manufacturers such as Boeing, Lockheed Martin, Rockwell, Raytheon, Northrop Grumman, TRW, Parsons, SAIC and others, make significant financial contributions to politicians on both political parties; Republicans and Democrats. Their influence on the Congress and on the White House is so great that they manipulate decisions on military budgets and on foreign policies.

Similarly, Israel’s economy is largely engaged in the production of weaponry and is the most militarized economy on earth. Israeli officials like to brag about the steady Israeli economic growth despite all the military conflicts they face. Yet this economic growth (raking money only for Israel’s military industrial complex) is not happening despite military conflicts, rather because of it. Ehud Barak, a previous Israeli defense minister has revealed that 150,000 Israeli households; about one in every ten Israelis, depend economically on military industries.

Israel was born out of terrorist war, and its existence depends on perpetual wars. Israel is a military colonial society where every aspect of the Israeli life is geared towards war efforts. Beginning with kinder gardens all the way through university high education Israeli children are indoctrinated into war mindset. Every Israeli educational and research and development institutions are geared specifically towards military technological industry. Since their childhood every Israeli is trained as a brutal killing soldier.

Before 2000 Israeli sale and export of weaponry were less than $2 billion. Israeli weaponry sale was negatively impacted after Israel’s defeat in the 2006 war against the well-trained and armed Lebanese Hezbollah fighters, who were able to destroy many of the Israeli Merkava tanks. To demonstrate the effectiveness of its weapons Israel diverted its military aggression against the besieged, weak, starved and militarily inexperienced Palestinians in the Gaza Strip. After Israel’s one month 2008/9 onslaught against Gaza Strip the Israeli weaponry sale rose almost to $6 billion. In 2013 Israeli sales and export of weapons hit a record high to $7.5 billion. This was due to Israel’s second onslaught on Gaza in 2012 during Cast Lead operation. After the Israeli 2014 brutal devastation of Gaza Strip the Israeli sale and export of weapons are expected to skyrocket.

Israel’s growing success in selling and exporting its weaponry to other countries was highlighted in June 2013 in defense analysts Jane’s, who ranked Israel in sixth place for arms exports, ahead of China and Italy; both major weapons producers. Yet, Israel’s own figures, which include many of its covert trades, place it in fourth place ahead of Britain and Germany, and surpassed only by the US, Russia and France.

There are a lot of Israeli arms dealers around the world due to the fact that when an Israeli officer retires at the early age of 45, Israeli government grants him a license to trade in Israeli weaponry. Many of them become covert arms dealers and travel to parts of the world where there is conflict to sell weapons. Many times they create conflict, such as in Africa, in order to sell weapons. They even deliver weapons through third and fourth mediators so that weapons could not be traced back to Israel.

Israel could not have sustained its military economy without the massive financial support of the successive American administrations and European Union member countries such as UK, France and Germany. The USA, alone, gives Israel almost $4 billion a year that don’t have to be spent on American weapon companies. Rather they are spent on Israeli military companies. There is also a huge cooperation between the Pentagon and the Israeli army in the development of all kinds of weapons, in war tactics and in testing of new weaponry, that are mainly illegal in other countries of the world including the US. These weapons are tested in live battle fields mainly against Palestinians in the West Bank and Gaza Strip. This allows Israel to commit the most barbaric atrocities and war crimes against Palestinians, and allows it to market itself around the world as weapons manufacturer and seller of American arms even those that are not yet “licensed”.

After each Israeli attack on Palestinian territories Israel conducts arms trade exhibitions and invites military leaders and arms dealers from all over the world, to show real-life footage of the effectiveness of Israel’s use of weapons being used on live real Palestinian targets. Israel also markets itself as the testing ground for all sorts of weaponry and what they call “homeland security equipment” that have not yet been regulated in many parts of the world. Israel has become to be known and accepted as the mad dog that disregards and has no respect to all international and humanitarian laws, and is willing to commit all kinds of war crimes making Palestinians guinea pigs and test subjects to all kinds of new weapons including nuclear and chemical weapons.

Israeli military industries are actually working as the research, development and test sector of the American military industries. The USA overtly cares about world opinion and international laws, so it uses Israel to test new American weaponry. Once a new military technology proves its effectiveness, then the American administration clears the way politically to legalize its use by its own military, its intelligence agencies, and even its police force, such as drone technology that had become the American weapon of choice in South East Asian countries, in African countries, and lately in the Middle Eastern countries.

After the attack of 911 Israel’s arms trade seems to double every three years. Western countries, those of the “Coalition of the willing”, sent their military generals into military training tours to Israel to learn urban war fare and how to control civilians and fight civilian resistance. Israel has 66 years’ experience in such oppression against Palestinians. Israel is selling its experience and expertise gained from its occupation of Palestine and from its conflicts with its neighbors.

Israeli arms manufacturers, such as Rafael Advanced Defense Systems (Rafael), Israeli Weapon Industries (IWI) formerly Israel’s Military Industry (IMI), Elbit Systems, and Israeli Aerospace Industries (IAI), are wholly or largely owned by the Israeli government and are thus protected from any internal scrutiny. Israel is also protected by American veto and pressure in the UN so that it could continue its war crimes against Palestinians and neighboring Arab countries. The UNSC had never conducted any study in the obvious Israeli war crimes against Palestinians especially in Gaza Strip in order to confirm or debunk Israeli war crimes reported by international humanitarian private organizations.

The arms trade industries operate in their own unique legal world with specific set of laws and regulations that allow any one of them or any of their dealers to violate and break international laws with complete impunity. The reason for this is that all arms manufacturers do regularly break international laws, and they have a mutual need and understanding for immunity. None of such violation, including Israeli violations, had ever been convicted.

Israel had turned Palestinian occupied territories, especially Gaza Strip, into a laboratory for refining, testing and showcasing its own weapons systems as well as other countries’ new experimental and illegal weapon systems. Israel is satisfying the military testing needs of mainly western hegemonic states, thus guaranteeing their political support to gain immunity for its continuous war crimes against Palestinians. These hegemonic states would not exert any real pressure on Israel to give up the Palestinian occupied territories or to finalize or accept any peace negotiations with Palestinians or with any Arab state.

In one of the Israeli arms trade show, Israel was showcasing missiles similar to those dropped on Gaza Strip to completely level to the ground ten story apartment tower buildings. The Israeli arms salesman stated the following:

“Every missile here costs as much as a Tel Aviv flat, it could also destroy one. We have hundreds of missiles to sell here. It’s funny but true, it’s relatively cheap. The business is growing by the year, every time I come here I say: Wow … look how much people spend on killing each other. If they would invest some of it in improving our lives, can you imagine what we could achieve?”

Dr. Elias Akleh is an Arab writer from a Palestinian descent, born in the town of Beit-Jala. His family was first evicted from Haifa after the “Nakba” of 1948 war during the first Zionist occupation of part of Palestine, then from Beitj-Jala after the “Nakseh” of 1967 war when Zionist Israeli military expansion occupied the rest of all Palestine. He is living now in exile in the US and publish articles on the web.