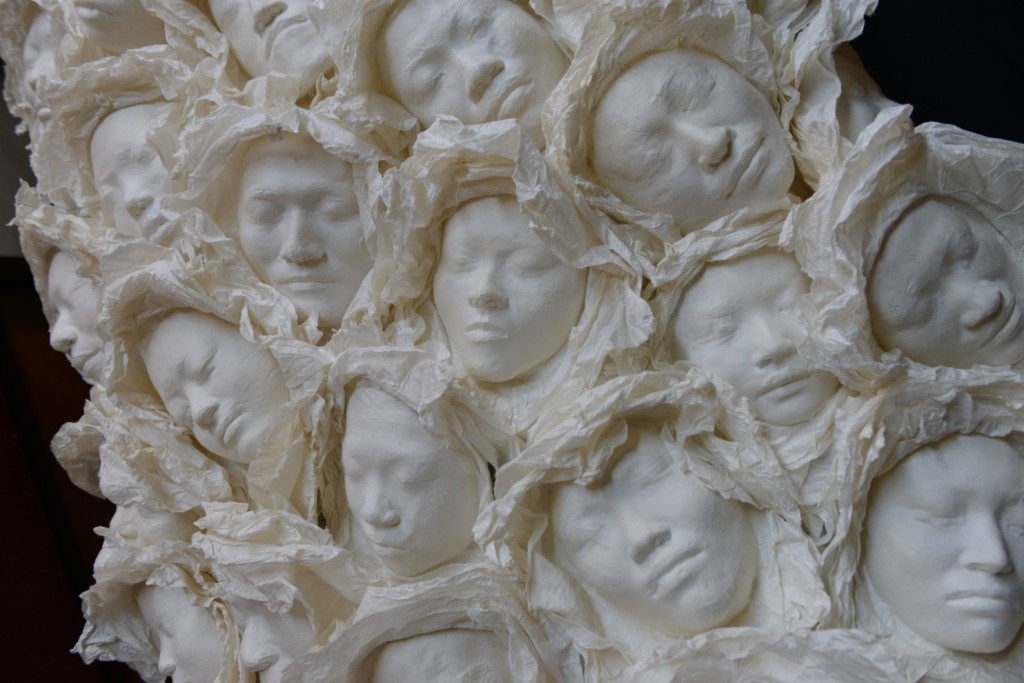 A wall of completed masks made as part of the Peace Mask East Asia project, which stands out at a time when it is politically advantageous in the region to pick fights rather than try to resolve them. (Noriko Hayashi/for The Washington Post)

October 14, 2014 – When it comes to tackling the tensions in East Asia — the historical disputes, the territorial battles, the entrenched stereotypes — plastering people’s faces probably isn’t the first remedy that comes to mind.

But in a part of the world where Japan’s wartime wrongs remain contentious 70 years on, and political leaders seem unable or unwilling to do much about it, a group of young people from across the region is giving art a chance.

On a recent fall day in the old imperial capital of Kyoto, Ryoma Yamanao, a 28-year-old businessman, lay down on a table and let Kim Myong-hee, a Korean artist, put two straws up his nose, while Dong Le and Zhou Yi, two Chinese students, pasted wet paper over his eyebrows.

Then, they proceeded to smother his face in a thick layer of wet plaster. They were making a life mask with a purpose.

Yamanao was the latest young person from the region to have a plaster cast made of his face as part of the Peace Mask East Asia project. An endeavor to create paper copies of 1,000 Japanese, Chinese and Korean faces, the project aims to show young people what they have in common by giving the Facebook generation some face time with each other — literally.

After the plaster had set on Yamanao’s face, Kim, Dong and Zhou slowly lifted it off and gently wiped away the excess from his hairline.

Kim would use the mold to make a mask of Yamanao’s face using traditional washi paper, before adding it to her wall of masks, which show each person’s idiosyncracies at the same time as reducing all her subjects to their commonalities. Looking at the masks, it is impossible to tell who is Korean and who is Chinese and who is Japanese.

The project stands out at a time when it is politically advantageous in the region to pick fights rather than try to resolve them.

“This is a face-to-face project,” says Kim, a Korean who has lived in Kyoto for almost four decades. She began making masks in 2002, when Korea and Japan co-hosted the soccer World Cup.

Last month, she started a new project, including China, to try to bring together people from the region between the ages of 15 and 35. She hopes to make 333 masks from each country by June, with the final mask from a bicultural person — “the generation of the future.”

After Yamanao, Kim made masks of a Chinese university student, Dai Zhi Dong, and Kim Hyung-jin, a scientific researcher from South Korea. 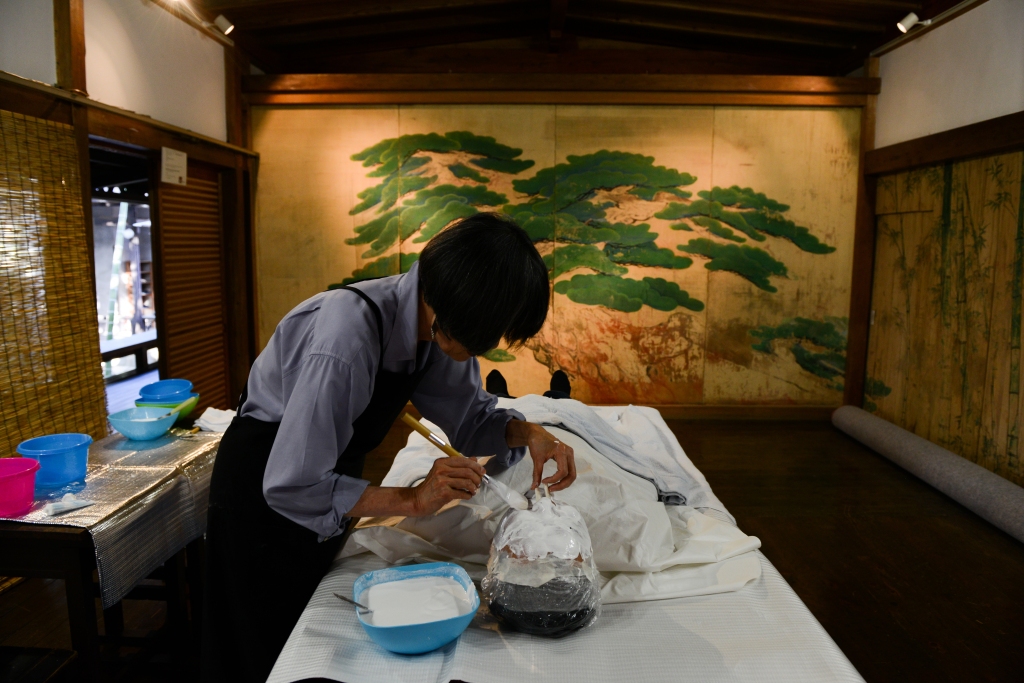 Kim Myong-hee, a Korean artist who has been living in Kyoto for almost four decades, puts plaster on Ryoma Yamanao, a young Japanese businessman, during a workshop for the Peace Mask East Asia project. (Noriko Hayashi/for The Washington Post)

“With small groups, we can connect so much better,” said Kim, standing in her apron in an atmospheric wooden room in an old Kyoto house, now a collaborative art space, that opened out onto a courtyard thick with bamboo trees.

South Korea is embroiled in an ugly battle with Japan centered around the “comfort women” forced into sexual slavery during World War II, while Chinese newspapers have been running a relentless drumbeat of anti-Japanese propaganda.

In Japan, nationalist rhetoric abounds. Several members of Prime Minister Shinzo Abe’s new cabinet are said to have links to an ultra-right group that spouts hate speech against Koreans in particular. There is also a small but noisy clutch of people inciting hatred on the Internet; a woman called Yoko has made a YouTube song about comfort women that includes lines such as, “they were nothing more than prostitutes.”

Although Abe is extending a hand to China, hoping for a meeting with President Xi Jinping when Beijing hosts the Asia-Pacific Economic Cooperation summit next month, no one is expecting regional harmony any time soon.

So, some young people are looking for ways to build bridges.

A group of university students in Kyoto made an uplifting “Japan, China, Korea Happy” video of the Pharrell Williams song. Others are getting onboard the Peace Mask project, run by Kim, her husband, American Robert Kowalczyk, and their daughter Kya, a social activist.

With designated youth leaders such as Dong and Zhou, both Chinese students at Ritsumeikan University in Kyoto, they are hopeful that they can make a difference, one person at a time.

Once the artistic process was done, all the participants sat around a table for tea and cookies and a discussion that felt like geopolitical group therapy, injected with the endearing earnestness of youth.

“When I first came to this program, I also invited some of my friends to come with me, but they were doubtful about it, because it’s new and they’ve never heard of it, but also they doubted whether it could be effective,” said Zhou, who’s 23 and comes from outside Shanghai.

“But today, I’m introducing my friend Eric,” she said, referring to Dai by his English name, “and so I’m contributing in my own tiny way, expanding the message.”

For his part, Dai, who hails from the restive Xinjiang region in China’s northwest, said he had experience with prejudice. “In China, people ask us if we go to school on horses or camels. I want to say to them: I’m Chinese!”

This has parallels in the broader region, he said. “Chinese don’t know Japanese; Japanese don’t know Koreans,” he said. “We need to be more open and get to know each other. We’re all kind of alike.”

The young people involved in the project are all driven, multilingual high-achievers who chat among themselves in Japanese and English. Still, several said they usually avoided talking about politics with their friends.

“When I discuss things like Abe’s policies with my Japanese friends, our opinions usually differ, so I generally just stop talking about it,” said Kim Hyung-jin, the South Korean researcher, who’s 32 and has been in Japan for 10 years. “It puts a chill in the air if we talk about such things.”

Indeed, Dong, a 27-year-old from Hubei province in China, said the project was giving him the opportunity to raise topics that are usually undiscussed. He posts about the project on Facebook, saying it helps spark dialogue among Chinese who are not exposed to Japan on a daily basis the way he is, as well as discussing it with his friends.

“We usually just talk about food and culture and life, but history is not something we talk about in our daily lives,” Dong said. “If young people can’t talk about our painful history, how can we hope to achieve a better future?”

Anna Fifield is The Post’s bureau chief in Tokyo, focusing on Japan and the Koreas. She previously reported for the Financial Times from Washington DC, Seoul, Sydney, London and from across the Middle East.