15 Oct 2014 – Thousands of Ukraine’s neo-Nazis surrounded the parliament in Kiev demanding that the government honor Ukrainian paramilitary forces who fought for Adolf Hitler in World War II, another embarrassing reminder of the extremism unleashed by last February’s U.S.-backed coup. 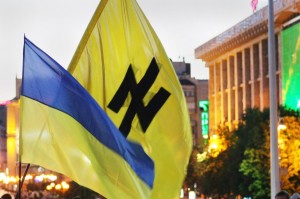 The neo-Nazi Wolfsangel symbol on a banner in Ukraine.

For months, the New York Times and other major U.S. news outlets have insisted that it’s just Russian propaganda to say that a significant neo-Nazi presence exists inside Ukraine, but thousands of these “non-existent” neo-Nazis battled police on Tuesday outside the parliament building in Kiev demanding recognition of their Hitler-collaborating forebears.

The parliament, aware of the obvious public relations fiasco that would follow if it bowed to far-right demands to honor members of the Nazi-affiliated Ukrainian Insurgent Army (or UIA), defeated the proposal. That touched off riots by an estimated 8,000 protesters led by Ukraine’s right-wing Svoboda party and the Right Sektor.

Historians blame the UIA and other Ukrainian fascist forces for the extermination of thousands of Poles and Jews during World War II as these right-wing Ukrainian paramilitaries sided with the German Nazis in their fight against the Soviet Union’s Red Army. Svoboda and the Right Sektor have elevated UIA leader Stepan Bandera to the level of a Ukrainian national hero.

But Svoboda and Right Sektor activists are not just neo-Nazi street protesters. They were key figures in last February’s violent uprising that overthrew elected President Viktor Yanukovych and established a coup regime that the U.S. State Department quickly recognized as “legitimate.” Many far-right militants have since been incorporated into the Ukrainian military in its fight to crush resistance to the coup regime from ethnic Russians in Ukraine’s east.

Though played down by the Western press, the neo-Nazi affiliations of these militants have occasionally popped up in news stories, including references to displays of Nazi insignias, but usually these citations are mentioned only in passing or are confined to the last few paragraphs of lengthy stories or are dismissed as “Russian propaganda.”

But this neo-Nazi reality continues to be an inconvenient truth about the U.S.-backed coup regime that seized power in Kiev with the overthrow of Yanukovych on Feb. 22. Several government ministries, including national security, were given to these far-right elements in recognition of their key role in the putsch that forced members of Yanukovych’s government to flee for their lives.

The larger historical context is that Nazism has been deeply rooted in western Ukraine since World War II, especially in cities like Lviv, where a cemetery to the veterans of the Galician SS, a Ukrainian affiliate of the Nazi SS, is maintained. These old passions were brought to the surface again in the battle to oust Yanukovych and sever historic ties to Russia.

The muscle behind the U.S.-backed Maidan protests against Yanukovych came from neo-Nazi militias trained in western Ukraine, organized into 100-man brigades and dispatched to Kiev. After the coup, neo-Nazi leader Andriy Parubiy, who was commander of the Maidan “self-defense forces,” was elevated to national security chief and soon announced that the Maidan militia forces would be incorporated into the National Guard and sent to eastern Ukraine to fight ethnic Russians resisting the coup regime.

At War in the East

As the U.S. government and media cheered this “anti-terrorist operation,” the neo-Nazis and other right-wing battalions engaged in brutal street fighting against Russian ethnic rebels. Only occasionally did this nasty reality slip into the major U.S. news media. For instance, an Aug. 10 article in the New York Times mentioned the neo-Nazi paramilitaries at the end of a lengthy story on another topic.

“The fighting for Donetsk has taken on a lethal pattern: The regular army bombards separatist positions from afar, followed by chaotic, violent assaults by some of the half-dozen or so paramilitary groups surrounding Donetsk who are willing to plunge into urban combat,” the Times reported.

“Officials in Kiev say the militias and the army coordinate their actions, but the militias, which count about 7,000 fighters, are angry and, at times, uncontrollable. One known as Azov, which took over the village of Marinka, flies a neo-Nazi symbol resembling a Swastika as its flag.” [See Consortiumnews.com’s “NYT Discovers Ukraine’s Neo-Nazis at War.”]

The conservative London Telegraph offered more details about the Azov battalion in an article by correspondent Tom Parfitt, who wrote: “Kiev’s use of volunteer paramilitaries to stamp out the Russian-backed Donetsk and Luhansk ‘people’s republics’… should send a shiver down Europe’s spine.

“Recently formed battalions such as Donbas, Dnipro and Azov, with several thousand men under their command, are officially under the control of the interior ministry but their financing is murky, their training inadequate and their ideology often alarming. The Azov men use the neo-Nazi Wolfsangel (Wolf’s Hook) symbol on their banner and members of the battalion are openly white supremacists, or anti-Semites.”

Based on interviews with militia members, the Telegraph reported that some of the fighters doubted the reality of the Holocaust, expressed admiration for Adolf Hitler and acknowledged that they are indeed Nazis.

Andriy Biletsky, the Azov commander, “is also head of an extremist Ukrainian group called the Social National Assembly,” according to the Telegraph article which quoted a commentary by Biletsky as declaring: “The historic mission of our nation in this critical moment is to lead the White Races of the world in a final crusade for their survival. A crusade against the Semite-led Untermenschen.”

In other words, for the first time since World War II, a government had dispatched Nazi storm troopers to attack a European population – and officials in Kiev knew what they were doing. The Telegraph questioned Ukrainian authorities in Kiev who acknowledged that they were aware of the extremist ideologies of some militias but insisted that the higher priority was having troops who were strongly motivated to fight. [See Consortiumnews.com’s “Ignoring Ukraine’s Neo-Nazi Storm Troopers.”]

But a rebel counteroffensive by ethnic Russians in August reversed many of Kiev’s gains and drove the Azov and other government forces back to the port city of Mariupol, where Foreign Policy’s reporter Alec Luhn also encountered these neo-Nazis. He wrote:

“Blue and yellow Ukrainian flags fly over Mariupol’s burned-out city administration building and at military checkpoints around the city, but at a sport school near a huge metallurgical plant, another symbol is just as prominent: the wolfsangel (‘wolf trap’) symbol that was widely used in the Third Reich and has been adopted by neo-Nazi groups. …

“Pro-Russian forces have said they are fighting against Ukrainian nationalists and ‘fascists’ in the conflict, and in the case of Azov and other battalions, these claims are essentially true.” [See Consortiumnews.com’s “Seeing No Neo-Nazi Militias in Ukraine.”]

More evidence continued to emerge about the presence of Nazis in the ranks of Ukrainian government fighters. Germans were shocked to see video of Azov militia soldiers decorating their gear with the Swastika and the “SS rune.” NBC News reported: “Germans were confronted with images of their country’s dark past … when German public broadcaster ZDF showed video of Ukrainian soldiers with Nazi symbols on their helmets in its evening newscast.

“The video was shot … in Ukraine by a camera team from Norwegian broadcaster TV2. ‘We were filming a report about Ukraine’s AZOV battalion in the eastern city of Urzuf, when we came across these soldiers,’ Oysten Bogen, a correspondent for the private television station, told NBC News. “Minutes before the images were taped, Bogen said he had asked a spokesperson whether the battalion had fascist tendencies. ‘The reply was: absolutely not, we are just Ukrainian nationalists,’ Bogen said.”

Despite the newsworthiness of a U.S.-backed government dispatching neo-Nazi storm troopers to attack Ukrainian cities, the major U.S. news outlets went to extraordinary lengths to excuse this behavior, with the Washington Post publishing a rationalization that the use of the Swastika was merely “romantic.”

This curious description of the symbol most associated with the human devastation of the Holocaust and World War II can be found in the last three paragraphs of a Post lead story published in September. Post correspondent Anthony Faiola portrayed the Azov fighters as “battle-scarred patriots” nobly resisting “Russian aggression” and willing to resort to “guerrilla war” if necessary.

The article found nothing objectionable about Azov’s plans for “sabotage, targeted assassinations and other insurgent tactics” against Russians, although such actions in other contexts are regarded as terrorism. The extremists even extended their threats to the government of Ukrainian President Petro Poroshenko if he agrees to a peace deal with the ethnic Russian east that is not to the militia’s liking.

“If Kiev reaches a deal with rebels that they don’t support, paramilitary fighters say they could potentially strike pro-Russian targets on their own — or even turn on the government itself,” the article states. (The riot outside the parliament building on Tuesday is an early indication that such a threat is real.)

The Post article – like almost all of its coverage of Ukraine – was laudatory about the Kiev forces fighting ethnic Russians in the east, but the newspaper did have to do some quick thinking to explain a photograph of a Swastika gracing an Azov brigade barracks.

So, in the last three paragraphs of the story, Faiola reported: “One platoon leader, who called himself Kirt, conceded that the group’s far right views had attracted about two dozen foreign fighters from around Europe.

“In one room, a recruit had emblazoned a swastika above his bed. But Kirt … dismissed questions of ideology, saying that the volunteers — many of them still teenagers — embrace symbols and espouse extremist notions as part of some kind of ‘romantic’ idea.”

Now, this inconvenient truth — this neo-Nazi extremism in Ukraine — has reemerged in violent clashes outside the parliament building in Kiev.

Investigative reporter Robert Parry broke many of the Iran-Contra stories for The Associated Press and Newsweek in the 1980s. You can buy his new book, America’s Stolen Narrative, either in print here or as an e-book (from Amazon and barnesandnoble.com).