‘German Politicians Are US Puppets’

“Now the Americans are even considering blowing up a nuclear power plant in Ukraine and then insisting that the culprits were either separatists or Russians,” claims the German journalist Udo Ulfkotte, former correspondent from Frankfurter Allgemeine Zeitung, one of the largest German newspapers.

He has published a book, Gekaufte Journalisten (“Purchased Journalists”), in which he describes how American and German politicians sway the German media, so that those journalists give the desired spin to world events. Ulfkotte claims that reporters are urged to bias their writing primarily to favor the American position and to oppose Russia. Udo Ulfkotte spoke to about how exactly this occurs and about the path his life is taking today after these revelations were made public. 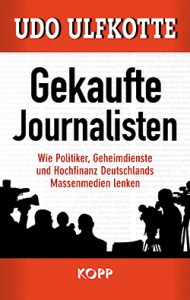 Q: Mr. Ulfkotte, you’ve said that you were given a lot of money to write pro-American articles. How profitable is to be a pro-American journalist in Germany?

Udo Ulfkotte: I didn’t get money – I got gifts. Things like gold watches, diving equipment, and trips with accommodations in five-star hotels. I know many German journalists who at some point were able to take advantage of this to buy themselves a vacation home abroad. But much more important than the money and gifts is the fact that you’re offered support if you write pieces that are pro-American or pro-NATO. If you don’t do it, your career won’t go anywhere – you’ll find yourself assigned to sit in the office and sort through letters to the editor.

Q: According to what you’ve said, journalists are corrupted surreptitiously, by inviting them for all-expense-paid trips to the US. But do serious professionals really sell themselves for so little?

UU: When you fly to the US again and again and never have to pay for anything there, and you’re invited to interview American politicians, you’re moving closer and closer to the circles of power. And you want to remain within this circle of the elite, so you write to please them. Everyone wants to be a celebrity journalist who gets exclusive access to famous politicians. But one wrong sentence and your career as a celebrity journalist is over. Everyone knows it. And everyone’s in on it.

Q: Why have you only now decided to go public with your opinion about German journalism?

UU: I’ve had three heart attacks, I no longer have children I have to support, and day after day I kept watching the Americans on the news, once again gearing up for their next war. This time it’s in Ukraine against Russia. But it’s always the same game. Not even a complete idiot could have been oblivious to the Americans’ one-sided anti-Moscow propaganda after the crash of flight MH17. Now the Americans are even considering blowing up a nuclear power plant in Ukraine and then insisting that the culprits were either separatists or Russians. I hear it all the time. It’s unconscionable!

Q: You claim that Germany is a “banana republic.” Isn’t that an overly harsh assessment? After all, Germany does have opposition movements, including radical ones, and the media is critical of the government. For example, the recent broadcast of the TV program Die Anstalt caused quite a stir with its pointed criticism of the heavily biased German media.

UU: After that broadcast aired, with its journalists using satire (!) to express criticism of the German media – and, above all, against its purely pro-American coverage of events – complaints were filed and they were taken to court. This is perfect evidence of the fact that Germany is a banana republic: you can’t even use satire to criticize the one-sided coverage. We have only the appearance of a free press. It’s crazy.

Q: What do you think about the targeting of politicians whom the German press has lumped together in a group known as “Russian sympathizers” (Schröder, Gysi, Wagenknecht, and others), and the pro-Russian journalists?

UU: Those “Russian sympathizers” are well-educated, sincere people. I say that, although I’m not aligned with them politically. But I respect their integrity. The fact that they’re being targeted is typical of banana republics such as Germany, where any deviation from mainstream opinion is harshly suppressed.

Q: You mentioned that Germany is still concealing the fact that in March of 1988, the regime of Saddam Hussein – at the time a Western ally – committed an act of genocide in a Kurdish city near the Iranian border, using chemical weapons manufactured in Germany. Can it be true that in all these years not a single newspaper, even an opposition paper, has written about that?

UU: No, they did write about it, but it took them a year to do so! I photographed Iranians who had been poisoned by German chemical weapons under the eyes of the US, but that was not supposed to be made public. At that time, the Iraqis, Germans, and Americans were celebrating their “final” victory over the Iranians. I found it ghoulish that in Baghdad they were celebrating the fact that they had jointly gassed human beings. I suffered greatly from the gas – later I got cancer. I did everything I could to record what had happened there, hoping that it would prompt an international outcry. But no one ever published it. Instead everyone celebrated their victory. To this day I ask myself why it’s no problem for German chancellors to travel to Israel and go down on their knees and ask the Jews for forgiveness for gassing them, but then the Iranians killed by German gas are just second-class citizens? Have you ever heard of a German chancellor apologizing for that in Tehran? We can see that German politicians are nothing more than puppets of the US. They should obediently do as Washington tells them. We continue to be a US colony, a banana republic, and not a free country.

Q: You say that intelligence services provided you with information about Libya, which you published under your own name. And you claim that that was doing what you were assigned to do by the CIA and the Bundesnachrichtendienst. But if the information was interesting and true, couldn’t it be that your interests simply coincided? After all, you could have refused to publish it.

UU: Yes, yes, I could have said “no.” You know, the ADAC – the biggest German automobile club – had an employee working for its helicopter rescue service who refused to cooperate secretly with the BND. He was immediately expelled from the ADAC and then went to court, but the judges decided that a person cannot refuse to work with the BND, and it’s not a problem that one might lose one’s job for resisting. Do you get it? Do you see what I’m saying? I didn’t want to be unemployed.

UU: That’s a translation error – it wasn’t the intelligence agencies that ordered the raids, but the secret state police. What the Nazis used to call the Gestapo is now called the Department of State Security. And they came and conducted raids six times under the pretext that I was betraying state secrets. These types of scare tactics are typical of banana republics.

Q: You say that the publication of this book could create problems for you. What kind, for example?

UU: Frankfurter Allgemeine Zeitung informed me in writing that they will file court charges against me for violating criminal, civil, and labor legislation, as well as corporate standards in journalism. That alone could destroy me. I’ve heard that many others want to put me in jail because I’ve once again exposed “state secrets.” Perhaps it would be worth it for me to fly to Moscow like Edward Snowden and ask for asylum there. Let’s wait and see how the leaders of the banana republic of Germany react, because they’ve been compromised, and everyone can read in my bestselling book how they manufacture the appearance of a free press here, and that democracy in Germany is merely an illusion.