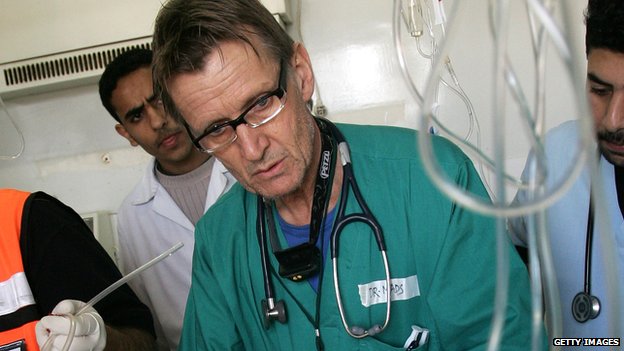 Dr Gilbert, pictured here in 2009, has been a frequent visitor to Gaza

A Norwegian doctor has been permanently banned from entering the Gaza Strip by the Israeli government.

Dr Mads Gilbert says he was stopped trying to cross into Gaza in October [2014]. He called the move “totally unacceptable”.

Dr Gilbert has treated patients in Gaza for more than a decade. He worked at the Shifa Hospital in Gaza City during the 50-day summer conflict.

He told the BBC he had never broken any Israeli rules during his spells working in Gaza.

But he suggested that his open reporting of the medical situation in the territory had angered the Israeli authorities.

“The fundamental reason for the ill health of the population in Gaza is of course the siege and the bombing,” he said.

An Israeli foreign ministry spokesman, Emmanuel Nahshon, described Dr Gilbert as a “Jekyll and Hyde” figure, hiding behind a cloak of being a humanitarian doctor.

He said an investigation was under way into Dr Gilbert and that the decision would be reviewed.

The Norwegian foreign ministry has said it will challenge the ban.

In July, Dr Gilbert was one of the co-signatories in a strongly-worded letter denouncing Israeli action in Gaza, published in the medical journal, the Lancet.

He also described scenes in the Shifa Hospital this summer as the worst he had ever seen.