Map: The Countries That Recognize Palestine as a State 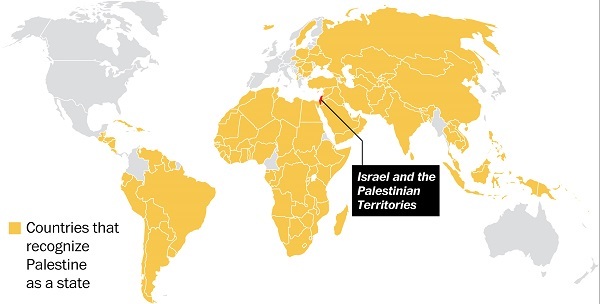 7 Nov 2014 – Last week, Sweden became the 135th member of the United Nations to officially recognize Palestine as an independent state. The act sparked a tetchy diplomatic incident with Israel, which WorldViews discussed here.

On the ground, a separate, viable Palestinian state is far from a reality. Israel occupies the West Bank and East Jerusalem, and it partially blockades the Gaza Strip, the territories that would comprise it. The continued expansion of Israeli settlements into the West Bank makes tackling the question of Palestinian sovereignty all the more difficult. So, too, the apparent collapse of talks between the Israeli government and its Palestinian interlocutors.

Sweden’s Foreign Minister Margot Wallstrom said her government’s decision was aimed at supporting the Palestinian Authority and its beleaguered President Mahmoud Abbas, particularly given the present tensions in Jerusalem. “It is important to support those who believe in negotiations and not violence,” she told Al Jazeera. “This will give hope to young Palestinians and Israelis that there is an alternative to violence.”

In the absence of progress in negotiations with Israel, Abbas has taken the Palestinians’ case to the United Nations in recent years. The effort is mostly symbolic — a bid to deepen the political isolation of the right-wing government of Israeli Prime Minister Benjamin Netanyahu.

Sweden’s move reflects a wider European frustration with Netanyahu. This week, French socialist lawmakers said they were preparing a bill calling on the government to recognize Palestine. In mid-October, British lawmakers overwhelmingly passed a motion indicating “that the Government should recognise the state of Palestine alongside the state of Israel, as a contribution to securing a negotiated two state solution.”

The motion is nonbinding, but serves as one more sign of Europe’s growing impatience with the Mideast status quo. The United States would want to see the two-state solution come into fruition before conferring official recognition upon Palestine. But that is, at present, a naive hope: A number of prominent ministers in Netanyahu’s government reject outright the possibility of the two-state solution ever being realized.

Before Sweden’s decision, tiny Iceland was the only Western European country to recognize Palestine.

As you can see in the map, most of the other nations that have not officially recognized Palestine are in the E.U. or are U.S. partners who wouldn’t want to ruffle Washington’s feathers. These include South Pacific island nations like Kiribati and Nauru.

Even then, it’s quite likely that the U.S. will find itself on this map within a steadily shrinking patch of gray in the months and years to come.

Ishaan Tharoor writes about foreign affairs for The Washington Post. He previously was a senior editor at TIME, based first in Hong Kong and later in New York.