Here’s a typical example of what’s being blacked-out:

This is a photo of a Ukrainian soldier guiding a truck-full of prisoners toward a ditch, to which the prisoners are then dragged one-by-one, and thrown in, and shot — then covered over with dirt after all the corpses (and perhaps some living bleeding survivors) are piled in it.

(Of course, any survivors then quickly choke to death, from the dirt): 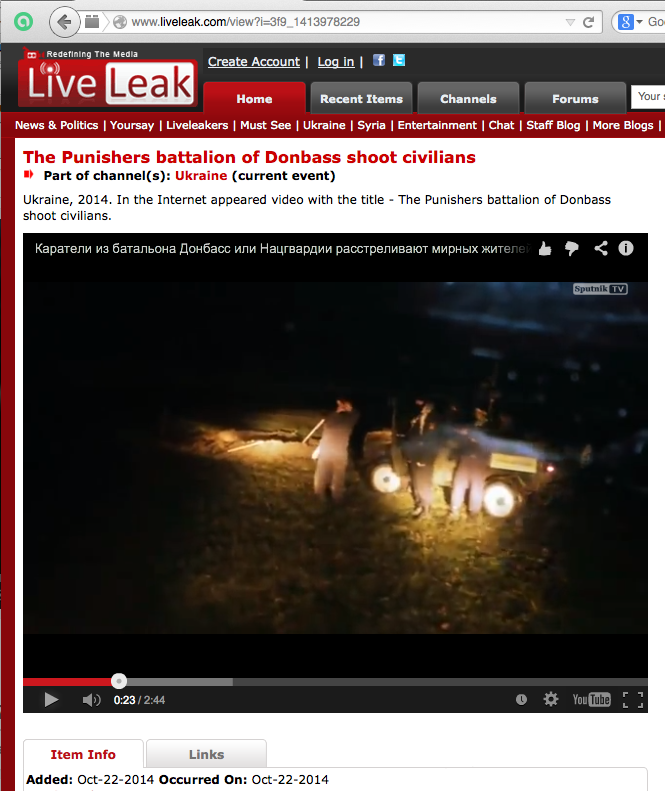 And here’s an explanation of how this extraordinary video of a genocide being carried out, came to be found by the resistance-fighters against Ukraine’s war to exterminate the residents in Ukraine’s southeast, Ukraine’s region where the vast majority of the people are ethnic Russians, or commonly called “Moskals” by many people in northwestern Ukraine, which term employed by them is equivalent to the terms “nigger,” and “kike” that are used in some other countries: all psychological terms of de-humanization.

Though this video of a genocide-in-action is rare, the event itself is routinely happening in southeastern Ukraine, so that the Ukrainian Government can reduce the population in the area of Ukraine that had voted over 80% for the Ukrainian President whom the Obama Administration overthrew in a violent CIA-paid, U.S.-State-Department planned-and-run, coup, that climaxed on 22 February 2014. The new Government is trying to eliminate enough of the people who had voted for him so that the coup-imposed regime will be able to stay in power ‘democratically,’ with those Russia-friendly voters gone — enough of those voters gone so that America’s coup-regime can continue even as a democracy.

This is the video from which that still-photo is taken — you can see this entire event (except the burial) here: http://www.liveleak.com/view?i=3f9_1413978229. The victims, who are shoved into, then shot in the ditch, are all dressed in civilian clothes. They’re not soldiers.

As is evident from that video, the troops who are executing these people don’t care whether any one of the bodies down in that ditch are still alive; the next victim just gets thrown promptly on top, and shot. These troops are interested only in speed, without concern for victims.

Their only “concern” for the victims is to rape the ones they want, and to kill as many of the residents who live there as possible. The objective is officially called “punishment.” That’s the Ukrainian Government’s term. The aim is to make them suffer.

Here is how deeply immersed in hatred of “Moscals” these people are. The Ukrainians who fought on Hitler’s side in WWII are heroes to them. An American friend who happens to live in the conflict-zone, the southeast, where the “Moskals” are predominant, wrote me today about the city of “Mariupol. The hospital there is being inundated with rape victims. A lot of girls are just going missing. People are disappearing constantly. The photo enclosed is from Artemosk yesterday. The Ukraine army ran over the car killing two people. It got stuck on top of the car.” Kill them however you can, is their assignment. Soldiers in the Ukrainian Army are taught that everyone who lives in these areas is the enemy. Killing the residents there is considered to be ‘patriotic.’

There is also plenty of bombing, and firing missiles at, the cities and villages there, to destroy people and buildings, so that many of the surviving residents will flee over the border into neighboring Russia, from whence they’ll never again be allowed to vote in a Ukrainian election — thereby further reducing the number of those voters in Ukrainian national elections. Such bombing and shelling seem to be the Government’s main methods of eliminating residents in the southeast. Also, white phosphorous and other illegal weapons of terror are used, in order to especially induce the residents to evacuate into Russia.

This is a “genocide” against ethnic Russians whose families have lived inside Ukraine, in many cases, for centuries. It is also, and in the very same sense, an “ethnic cleansing,” to lock-in the anti-Russian regime that Obama installed earlier this year.

Here are some of the people who have been fleeing into Russia. Every one of those busloads of refugees exiting Ukraine is further success for Obama’s plan, because it means fewer pro-Eastern, anti-Western, voters.

So, as you can see, the new Ukrainian Government is having considerable success in its efforts to murder and terrorize enough of the residents there, for Ukraine’s electoral map to be no longer as favorable as it formerly was toward political candidates who prefer Russia over the United States. This is a way to gain a new ally against Russia, right next door to Russia. It’s conquest of Ukraine’s southeast, by Ukraine’s northwest.

Here is a Gallup poll that had been taken throughout Ukraine in April 2014, just after the coup. As you can see, the northwest liked the U.S., the European Union, and NATO, while the southeast liked Russia and didn’t want to join either the EU or NATO. Furthermore, Crimeans, the residents in what had been the far-southernmost part of Ukraine, loathed Ukraine, and were relieved to be restored again to Russia. Sectional differences in Ukraine are extreme. Obama forced the Russia-haters into power, and wants to keep them in power.

Immediately after the coup, Russia sent troops into Crimea to preserve its Black Sea Fleet which has always been stationed there; and this military presence protected Crimeans, too, against the ethnic cleansing that was quickly started by the new Ukrainian regime to eliminate the residents in other areas of Ukraine’s southeast than Crimea. You’ll see those areas in purple on Ukraine’s 2010 electoral map, with the purple areas being the ones where the election’s pro-Russian winner, Viktor Yanukovych, had received over 80% of the vote. Here is the map of that 2010 vote, with the purple areas being the same areas that are now being ethnically cleansed. This map shows the exact voting-percentages: the three districts that voted more than 80% for the man whom Obama overthrew are now the ones that either broke away from Ukraine or are trying to. This is where the genocide is being concentrated. The people who live there aren’t wanted by Kiev’s new Government; only their land is.

Back when the U.S-engineered “Maidan” demonstrations had first placed into power a pro-U.S. Ukrainian President, Yanukovych’s opponent in 2004, here is the election map, which showed just the same areas that were strongly pro-Russian then as now.

Obviously, the U.S. CIA, and State Department, and President Barack Obama, can read electoral maps; and, as long as those voters in Ukraine’s far-east stayed alive where they were, inside Ukraine, no anti-Russian regime in Ukraine would be able to remain securely in power.

However, a pretext needed to be established in order to ‘justify’ this ethnic cleansing; and that pretext was that they were separatists who threatened the presumed (but always fictional) unity of the Ukrainian culture and State.

In order to scare the residents in the pro-Russian areas and get them to become separatists — to become terrified enough for them to want to become part of Russia or else flee into safety inside Russia rather than to be attacked, bombed, and shot, by this new regime in Kiev — the Government, or actually one of its officials who happens to be one of Ukraine’s oligarchs, with a fortune over five billion dollars, held a massacre of peaceful pro-Russian demonstrators they trapped inside the Odessa Trade Unions Building on 2 May 2014, and then the army itself invaded other cities in the southeast on May 9th. By this time, many residents throughout the southeast, basically in the areas where Yanukovych had received over 80% of the vote, formed themselves into militias and moved to secede from Ukraine (to protect themselves and their families from the new regime), which this new Ukrainian Government promptly called ‘terrorism,’ and the Government announced an “Anti-Terrorist Operation,” or “ATO,” in order to exterminate them. Also, many people in Ukraine’s northwest openly mocked the people who had been burnt and clubbed to death at the Trade Unions Building massacre. The victims of that massacre were blamed for the massacre, because they had been ‘terrorists.’

Here is how Ukraine’s Defense Minister described his plan:

“There will be a thorough filtration of people. There will be special filtration measures put in place. We will filter out people, including women, who are linked to separatism, who were committing crimes on Ukrainian territory, crimes related to terrorist activities. We have a lot of information regarding this, and we have a formidable framework to combat this, and respective power structures will carry out this operation. Besides, this is a serious issue, related to the fact that people will be resettled to other regions.”

The new Government is also training Ukraine’s children to view extermination of Russians as being a patriotic necessity for Ukrainians. There are summer camps to which children are sent to be taught Ukrainian nazi ideology, where they march under both the Ukrainian flag and also various nazi flags, sometimes including the swastika. Both at such camps, and inside the parliament, the German nazi salute of the stiff right arm raised upward, with the hand and fingers positioned stiffly forward, is commonly given, as a sign of the individual’s loyalty to the country. Also, Ukraine’s military is increasingly filled with men who are tattooed with the swastika and other German nazi insignia. The common heritage back to Adolf Hitler (whom America’s WWII veterans went to war to defeat, of course) is being honored, not merely more overtly, but also more privately, by right-wing Ukrainians, as having been the leading edge of the new Ukraine, which U.S. President Barack Obama — the United States Government — installed on February 22nd, and which perpetrated the Odessa massacre on May 2nd, as well as the civil war that followed. These are America’s new  allies.

But it’s all being blacked-out, in countries that claim to represent democracy. This black-out adds insult to the injury that the present regime is causing, and not only to Ukraine, but to US. It’s complicity in this Administration’s criminality. And it is dangerous.

This is no mere game. The public needs to know that this is happening, and why it’s happening. Otherwise, there is no democracy, because what’s at stake here is not only the character of today’s America, but is America’s future, and the world’s. If the American people are manipulated about this, then they are no free people, and American democracy is then itself fake, no longer real, in any significant sense. Just a sham. And a shame — not of the public, but of the people who hide the truth from the public.

Due to the Internet, this is the first genocide that is being documented in real time, as it occurs. Historians will note this genocide, and will also note where it was reported, and where it was not reported.

Investigative historian Eric Zuesse is the author, most recently, of They’re Not Even Close: The Democratic vs. Republican Economic Records, 1910-2010, and of  CHRIST’S VENTRILOQUISTS: The Event that Created Christianity.