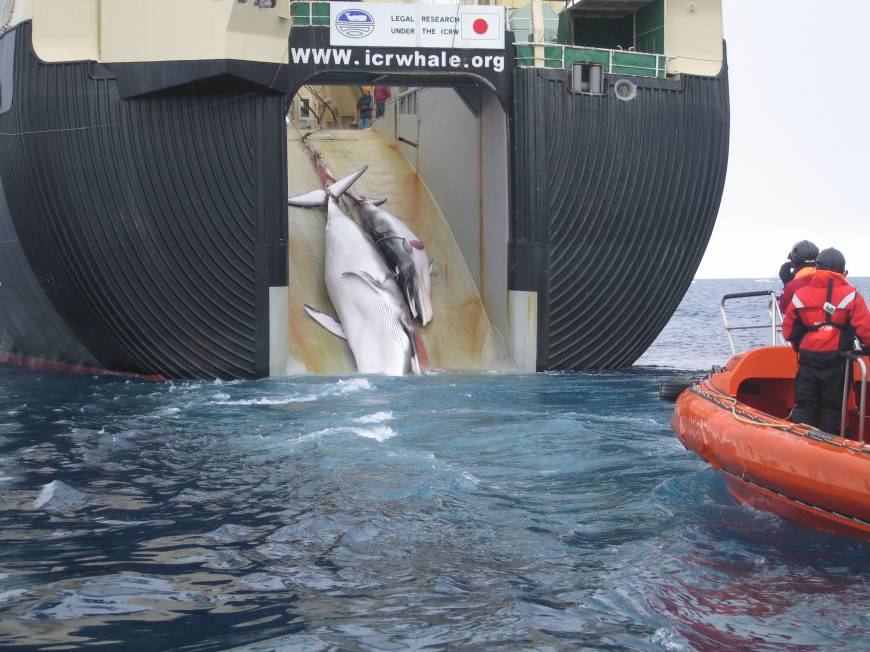 End of the line: A Minke whale and her 1-year-old calf are hauled aboard the Nisshin Maru, the world’s only whale-factory ship, in the Southern Ocean in February 2008. In this case, Japan’s ‘legal research’ advertised on the ship’s stern left a large wound from an explosive harpoon in the calf’s belly. | AUSTRALIAN CUSTOMS AND BORDER PROTECTION SERVICE

The UN Conservation of Migratory Species of Wild Animals (CMS) said on Sunday [9 Nov 2014] that six days of “intense negotiations” led to new protection for scores of bird, fish and mammal migratory species.

A record 21 species of shark, ray and sawfish were added to the list.

The polar bear, which is found in the Arctic, and the widely-distributed Cuvier’s beaked whale made the list too.

Also newly protected are the red-fronted gazelle, common in Africa, and the great bustard, found in Europe and Asia.

Protecting these animals is key for overall environmental conservation.

“Migratory animals have become the global flagships for many of the pressing issues of our time,” said CMS executive secretary Bradnee Chambers.

“From plastic pollution in our oceans, to the effects of climate change, to poaching and over-exploitation, the threats migratory animals face will eventually affect us all.” 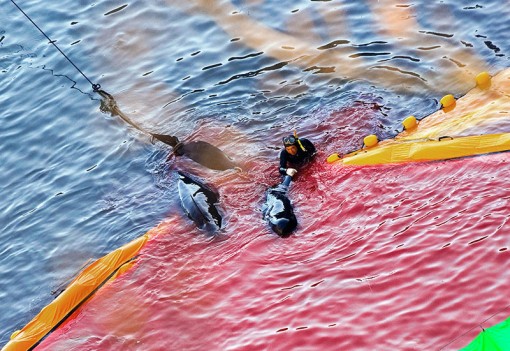 More than 900 experts from 120 countries met for the six-day meeting, approving all but one proposed species to be included on the protected wildlife list.

The African lion did not make the final cut because there was not enough information from the countries where it lives.

The conference was the best-attended in the body’s 35-year history, and CMS hailed the “unprecedented” level of attention to the topic.

The director of the UN Environment Program, which administers CMS, said global interest in animal protection was crucial.

“The responsibility for protecting wildlife is a shared one, and that the threats to wildlife can be tackled most effectively through global cooperation,” said UN Undersecretary-General Achim Steiner, who heads the UNEP.

The next CMS meeting will be held in the Philippines in 2017.