A can with a little hole and some duct tape. It sounds simple, but that’s where the paradox resides. To photograph with a digital camera in auto mode, all you need to do is click. But a pinhole, the mother of all analog cameras, requires much more than that: a good dose of patience and concentration, for a start, but also an understanding of the basic principle of photography, which is controlling light. After that, some imagination, inspiration and encouragement will do the rest.

At least that is what the “Mão na Lata” (Hand on can) project is about. It consists of distributing pinhole cameras to teenagers from 12 to 18 years old in Complexo da Maré, a neighborhood in Rio de Janeiro comprising of 16 favelas  where about 130,000 people live. From the crafting of the cameras, made with powdered milk cans, to the developing of the negatives, everything is done by the participants themselves, who are asked to document their community’s daily life in black and white.

Mão na Lata, which was founded by photographer Tatiana Altberg, has offered craft photography and literature workshops to young people from the community in partnership with NGO Redes da Maré (Maré Networks) since 2003. In 2012, Altberg gained support from state oil company Petrobrás, through the Brazilian Rouanet Law (which encourages companies to finance cultural projects), to develop the project “From craft to digital”, in which students learned the basics of digital photography in addition to pinhole photography. The project also encouraged students to photograph places mentioned in the books of Machado de Assis, a Brazilian writer who lived in Rio de Janeiro in the 19th century and was one of the most important names in national literature.

The initiative resulted in the book “Cada Dia Meu Pensamento é Diferente” (Each day my thought is different), a compilation of the teenagers’ work, released by NAU publishing house in 2013.

In the book, Eliana Souza Silva, director of Redes da Maré, writes about the project:

This collective work brings together artistic quality and political impact. It affirms that the inhabitants of the Maré neighborhood create and reinvent themselves everyday, like any other citizen from the polis. The initiative is part of a larger project from Redes da Maré, an institution who bets on initiatives that create/stimulate aesthetic experiences as a fundamental part of human life in an important region from Rio de Janeiro, the Maré. […] All this acknowledging this process as a right that has been historically denied to a certain part of the Brazilian population. 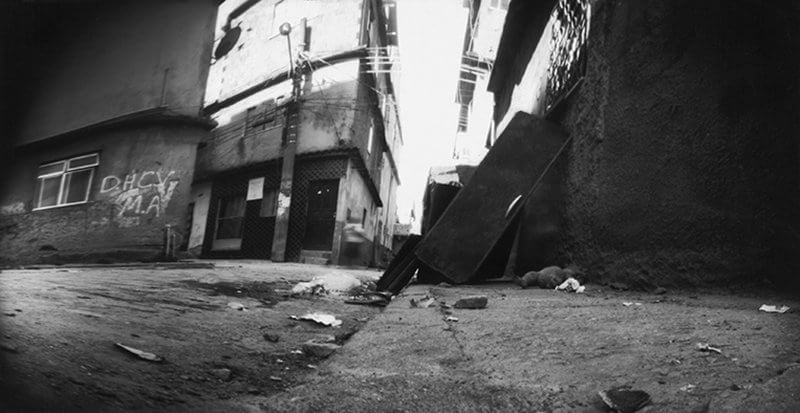 Altberg and Luiza Leite, professor of literature who collaborated with the book’s edition, explain what inspired them to choose the book’s title:

The book’s title is an excerpt of an essay written by one of the students. We wanted a title that could express the changing quality of the reflective thought, something that was achieved by the students after a long process of creation.

The author of said essay is Jonas Willami, 17, who said this in the book’s launch party:

It gave me more passion for photography. It was a great sensation, to see everyone’s happiness here in the launch party, because this is not just a project, we are a family. And the sentence fits perfectly with the book’s story.

In the book, Ana Maria Mauad, associate professor at the History Department of Federal Fluminense University, reflects on the symbolism and timeless character of the images:

The world we get to know with those images traverses time, uniting past and present – the “Rio de Janeiros” of Machado de Assis, of the conflict, of the pacification, of the life of common people in their fascinating exceptionalities.

This article was originally published by Global Voices Online and is reproduced on this website (Oximity) as part of a content sharing partnership.