Every child should visit an abattoir. If you disagree, ask yourself why.

What can you say about a society whose food production must be hidden from public view? In which the factory farms and slaughterhouses supplying much of our diet must be guarded like arsenals to prevent us from seeing what happens there? 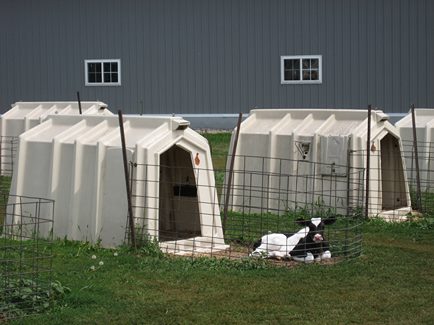 We conspire in this concealment: we don’t want to know. We deceive ourselves so effectively that much of the time we scarcely notice that we are eating animals, even during what were once rare feasts, such as Christmas, which are now barely distinguished from the rest of the year.

It begins with the stories we tell. Many of the books written for very young children are about farms; but these jolly places in which animals wander freely, as if they belong to the farmer’s family, bear no relationship to the realities of production. The petting farms to which we take our children are reifications of these fantasies. This is just one instance of the sanitisation of childhood, in which none of the three little pigs gets eaten and Jack makes peace with the giant, but in this case it has consequences.

Labelling reinforces the deception. As Philip Lymbery points out in his book Farmageddon(1), while the production method must be marked on egg boxes in the EU, there are no such conditions on meat and milk. Meaningless labels such as “natural” and “farm-fresh” and worthless symbols such as the little red tractor distract us from the realities of broiler units and intensive piggeries. Perhaps the most blatant diversion is “corn-fed”. Most chickens and turkeys eat corn, and it’s a bad thing, not a good one.

The growth rate of broiler chickens has quadrupled in 50 years: they are now killed at seven weeks(2). By then they are often crippled by their weight. Animals selected for obesity cause obesity. Bred to bulge, scarcely able to move, overfed, factory farmed chickens now contain almost three times as much fat as chickens did in 1970, and just two thirds of the protein(3). Stalled pigs and feedlot cattle have undergone a similar transformation. Meat production? No, this is fat production.

Sustaining unhealthy animals in crowded sheds requires lashings of antibiotics. These drugs also promote growth, a use that remains legal in the United States and widespread in the European Union, under the guise of disease control. In 1953, Lymbery notes, MPs warned in the House of Commons that this could cause the emergence of disease-resistant pathogens(4). They were drowned out by laughter. But they were right.

This system is also devastating to the land and the sea. Farm animals consume one third of global cereal production, 90% of soya meal and 30% of the fish caught. Were the grain now used to fatten animals reserved instead for people, an extra 1.3 billion could be fed(5). Meat for the rich means hunger for the poor. 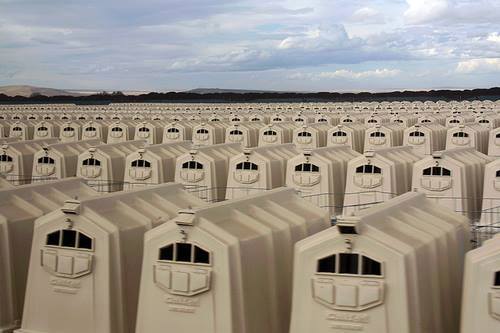 What comes out is as bad as what goes in. The manure from factory farms is spread ostensibly as fertiliser, but often in greater volumes than crops can absorb: arable land is used as a dump. It sluices into rivers and the sea, creating dead zones sometimes hundreds of miles wide(6). Beaches in Brittany, Lymbery reports, where there are 14 million pigs, have been smothered by so much seaweed, whose growth is promoted by manure, that they have had to be closed as a lethal hazard: one worker scraping it off the shore died apparently of hydrogen sulphide poisoning, caused by the weed’s decay.

It’s madness, and there is no anticipated end to it. The global demand for livestock is expected to rise 70% by 2050(7).

Four years ago, I softened my position on meat-eating(8) after reading Simon Fairlie’s book Meat: a benign extravagance(9). Fairlie pointed out that around half the current global meat supply causes no loss to human nutrition. In fact it delivers a net gain, as it comes from animals eating grass and crop residues that people can’t consume.

Since then, two things have persuaded me that I was wrong to have changed my mind. The first is that my article was used by factory farmers as a vindication of their monstrous practices. The subtle distinctions Fairlie and I were trying to make turn out to be vulnerable to misrepresentation. The second is that while researching my book Feral I came to see that our perception of free range meat has also been sanitised(10). The hills of Britain have been sheepwrecked: stripped of their vegetation, emptied of wildlife, shorn of their capacity to hold water and carbon; all in the cause of minuscule productivity. It is hard to think of any other industry, except scallop dredging, with a higher ratio of destruction to production. Wasteful and destructive as feeding grain to livestock is, ranching could be even worse. Meat is bad news, in almost all circumstances.

So why don’t we stop? Because we don’t know, and because we find it difficult, even if we do. A survey by the US Humane Research Council discovered that only 2% of Americans are vegetarians or vegans(11), and more than half give up within a year. Eventually, 84% lapse. One of the main reasons, the survey found, is that people want to fit in. We might know it’s wrong, but we block our ears and carry on.

I believe that one day artificial meat will become commercially viable(12), and that it will change social norms. When it becomes possible to eat meat without killing, keeping and slaughtering livestock for meat will soon be perceived as unacceptable. But this is a long way off. Until then perhaps the best strategy is to encourage people to eat as our ancestors did. Rather than mindlessly consuming meat at every meal, we should think of it as an extraordinary gift: a privilege, not a right. We could reserve meat for a few special occasions, such as Christmas, and otherwise eat it no more than once a month.

All children should be taken by their schools to visit a factory pig or chicken farm, and to an abattoir, where they should be able to witness every stage of slaughter and butchery. Does this suggestion outrage you? If so, ask yourself what you are objecting to: informed choice or what it reveals? If we cannot bear to see what we eat, it’s not the seeing that’s wrong, it’s the eating.

Published in the Guardian 17th December 2014