Despite Qatar’s promises to improve conditions, Nepalese migrants have died at a rate of one every two days in 2014.

Analysis: Sepp Blatter and the Qatar 2022 World Cup: too little, too late 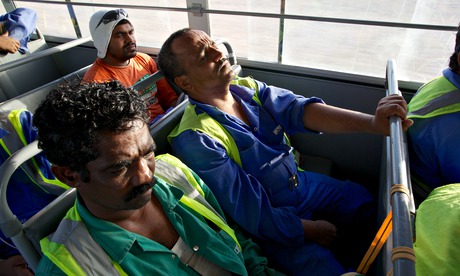 An exhausted migrant worker travels back to his labour camp at the end of the day in Qatar. Photograph: Pete Pattisson

Nepalese migrants building the infrastructure to host the 2022 World Cup have died at a rate of one every two days in 2014 – despite Qatar’s promises to improve their working conditions, the Guardian has learned.

The figure excludes deaths of Indian, Sri Lankan and Bangladeshi workers, raising fears that if fatalities among all migrants were taken into account the toll would almost certainly be more than one a day.

Qatar had vowed to reform the industry after the Guardian exposed the desperate plight of many of its migrant workers last year. The government commissioned an investigation by the international law firm DLA Piper and promised to implement recommendations listed in a report published in May.

But human rights organisations have accused Qatar of dragging its feet on the modest reforms, saying not enough is being done to investigate the effect of working long hours in temperatures that regularly top 50C. 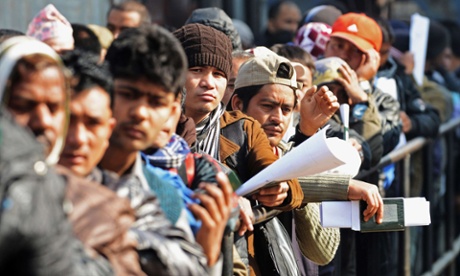 The Nepalese foreign employment promotion board said 157 of its workers in Qatar had died between January and mid-November this year – 67 of sudden cardiac arrest and eight of heart attacks. Thirty-four deaths were recorded as workplace accidents.

Figures sourced separately by the Guardian from Nepalese authorities suggest the total during that period could be as high as 188. In 2013, the figure from January to mid-November was 168.

“We know that people who work long hours in high temperatures are highly vulnerable to fatal heat strokes, so obviously these figures continue to cause alarm,” said Nicholas McGeehan, the Middle East researcher at Human Rights Watch.

“It’s Qatar’s responsibility to determine if deaths are related to living and working conditions, but Qatar flatly rejected a DLA Piper recommendation to launch an immediate investigation into these deaths last year.”

Some within Qatar suggest the cardiac arrest death rates could be comparable to those among Nepalese workers of a similar age at home. The Indian embassy argued this year that the number of deaths was in line with the average in their home country. But in the absence of robust research or any attempt to catalogue the cause of death, human rights organisations say it is impossible to properly compare figures. 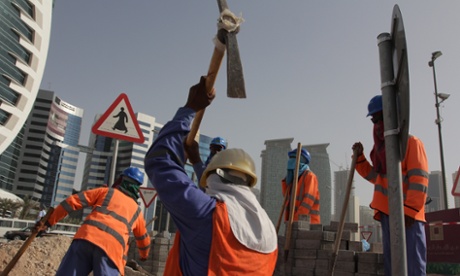 The mistreatment of migrant workers, including the late or non-payment of wages, poor quality accommodation and the lack of the freedom to change jobs or leave the country, has attracted severe criticism from human rights groups. Photograph: Supplied

A series of stories in the Guardian have shown that migrant workers from Nepal, India, Sri Lanka and elsewhere were dying in their hundreds. While some were listed as having been killed in workplace accidents, many more were said to have died from sudden, unexplained cardiac arrest.

The government confirmed in the DLA Piper report that 964 workers from Nepal, India and Bangladesh had died while living and working in the Gulf state in 2012 and 2013.

The report recommended that Qatar do more to record and investigate the causes of death among the migrant population but it has made little outward progress.

After it was published, Qatar said it would reform the kafala system that keeps workers tied to their employer, and better enforce laws that require contractors to provide humane living conditions and ban them from seizing passports.

But the system that Qatar proposed to replace kafala would still leave workers tied to their employer for the length of their contract, which could be as much as five years. 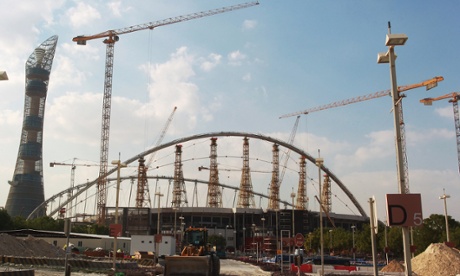 Khalifa Stadium in Doha is one location undergoing complete renovation in preparation to host some of the matches for the 2022 World Cup in Qatar. Photograph: AFP/Getty Images

Rather than scrapping the exit visa system, which in effect allows employers to stop their charges leaving the country without permission, Qatar proposed a complex procedure that still allowed employers to raise objections.

There are about 400,000 Nepalese workers in Qatar among the 1.4 million migrants working on a £137bn construction spree in the tiny Gulf state. Many travel to Doha having borrowed money from unscrupulous recruitment agencies, only to find the wages and conditions on offer differ significantly from those promised.

The Qatar government also points to increases in the number of labour inspectors and new laws requiring wages to be paid by electronic transfer as evidence that it is serious about improving workers’ rights and conditions.

But an Amnesty International report last month warned that Qatar was “dragging its feet” when it came to making meaningful changes. 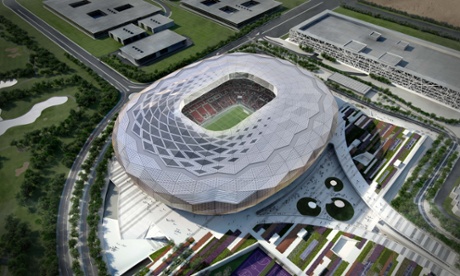 The artists’ impressions of Qatar’s 2022 World Cup venues, like the Qatar Foundation Stadium, are impressive – but criticism over treatment of migrant workers has dogged the development. Photograph: AP

“Despite making repeated promises to clean up its act ahead of the World Cup, the government of Qatar still appears to be dragging its feet over some of the most fundamental changes needed, such as abolishing the exit permit and overhauling its abusive sponsorship system,” it said.

“Six months later, only a handful of the limited measures announced in May have even been partially implemented. Overall, the steps taken so far are woefully insufficient.”

In November the Qatari ministry of labour issued a statement saying it was doing everything possible to improve working conditions. “We believe that the people helping us build our country deserve to be fairly paid, humanely treated and protected against exploitation,” it said. “That is why we are reforming our labour laws and practices.

“We fully appreciate there is much more to do but, as in every country in the world, change does not happen overnight. Significant changes such as these take more time to implement than some may wish, but we intend to effect meaningful and lasting change for the benefit of all those who live and work in Qatar.”