The defence minister’s judgment is shaped by his psychological attitude to Palestinians’ (or ‘Arabs’) – not by a rational analysis of events.

Is Defence Minister Moshe Ya’alon an unintelligent person? No. He is considered a smart person and he has an excellent memory, too. On a personal level and in terms of intelligence he is equal to other public leaders who achieved greatness here.

So how is it that this man decides to say, in Friday night television interviews, that security co-ordination is more important to the Palestinian Authority than to Israel? And how could it happen that the person who is considered ultimately to be responsible for the security of his country spits in the face of Palestinian President Mahmoud Abbas just 24 hours after the funeral of Palestinian minister Ziad Abu Ein, declaring: “We’ll manage without security co-ordination. These are empty threats”? 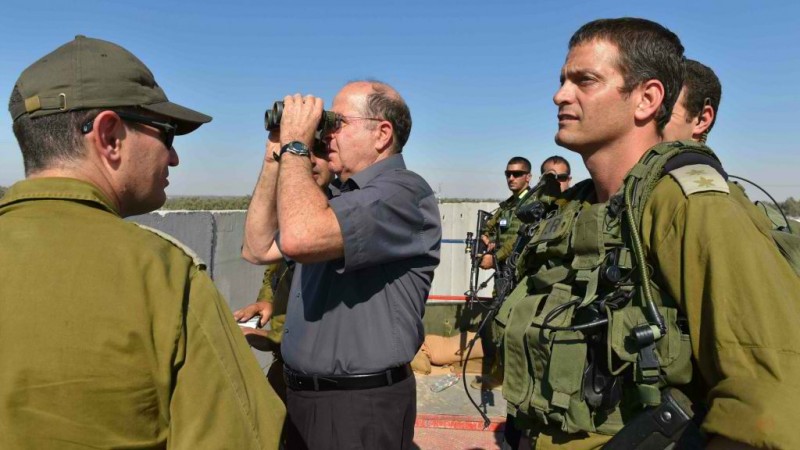 Moshe Ya’alon trying to make out the vast Hamas army advancing on Israel. He knows it’s there. Photo by EPA/IDF

In order to understand Ya’alon’s thinking we should recall what he said on May 15, in the wake of the deaths of two Palestinian youths, Mohammed Abu Taher and Nadim Nuwara, in a clash with Israel Defence Forces soldiers at the Bitunia checkpoint. Palestinian security cameras that documented the incident showed that at least one of the two was apparently shot by Israeli security forces.

In response, Ya’alon said: “I’m familiar with the method of edited video clips.”

More video footage, this time from CNN – which documented the event and ostensibly showed an Israeli soldier firing deliberately at the site where the incident took place – was also contemptuously dismissed by the defence establishment.

That went on until last month, when reporters Chaim Levinson and Gili Cohen revealed in Haaretz that the bullet that killed Nuwara was identified with certainty as having come from the weapon of a Border policeman.

Ya’alon, who scorned the reliability of the documentary film clips in May, is the one who is now dismissing the possibility that the Palestinian Authority will take revenge against Israel for the death of Abu Ein by suspending security co-operation.

It is not a lack of understanding that lies at the basis of the defence minister’s diagnosis, but a worldview and prejudice; his judgment of the situation is strongly influenced by his psychological and emotional attitude to all “Palestinians” (or “Arabs”) – not necessarily by a rational analysis of events.

According to Ya’alon’s conceptual world, like that of most current and retired defence establishment officials, the Palestinians are an inferior group whose feelings and desires should not be taken into account. They can be disdained, publicly humiliated, have their dignity trampled – and there will be no damage to Israel as a result.

According to this way of thinking, the country’s situation is dictated by a military balance of powers between Israel and the PA, and therefore Palestinian leaders will easily swallow Ya’alon’s insult, when he declares that the threat to end security co-operation is an empty one.

Even if Ya’alon’s statement is based on intelligence information, and not only on his condescending worldview, declaring it in prime time on the Friday night news was not the essence of wisdom. Common sense and the good of the country should have directed him to keep this insight to himself, even if election considerations and a pursuit of popularity spurred him to give it public expression.

How will Ya’alon explain the defiance of Abbas [and] his colleagues in Ramallah – whether his prophecy is fulfilled and the Palestinian leadership really doesn’t announce a severance of ties with Israel, or whether reality hits him in the face as happened at the Bitunia checkpoint seven months ago?

Napoleon once said that when you scratch a Russian soldier a wild Tatar is revealed. When you peel off the uniforms of many senior Israel Defence Forces officers who have entered the political arena, you discover people who are captives of fixed, belligerent ideas about “the Arabs” and “the Palestinians.” Only rarely do we pay attention to the destructive effect of this branding on the decision-making process of the country’s leadership.