The volume of international transfers of major weapons grew by 14 per cent between 2004–2008 and 2009–13. The five largest suppliers in 2009–13—the United States, Russia, Germany, China and France—accounted for 74 per cent of the volume of exports. With a few exceptions from other regions, the USA and European suppliers have dominated the top tier of suppliers for the past 20 years. However, China has re-established itself as one of the top suppliers: in 2009–13 it was the fourth largest supplier.

SIPRI data on arms transfers does not represent their financial value. However, a number of states also publish figures on the financial value of their arms exports. Based on this data, SIPRI estimates that the total value of the global arms trade in 2012 was at least $58 billion. 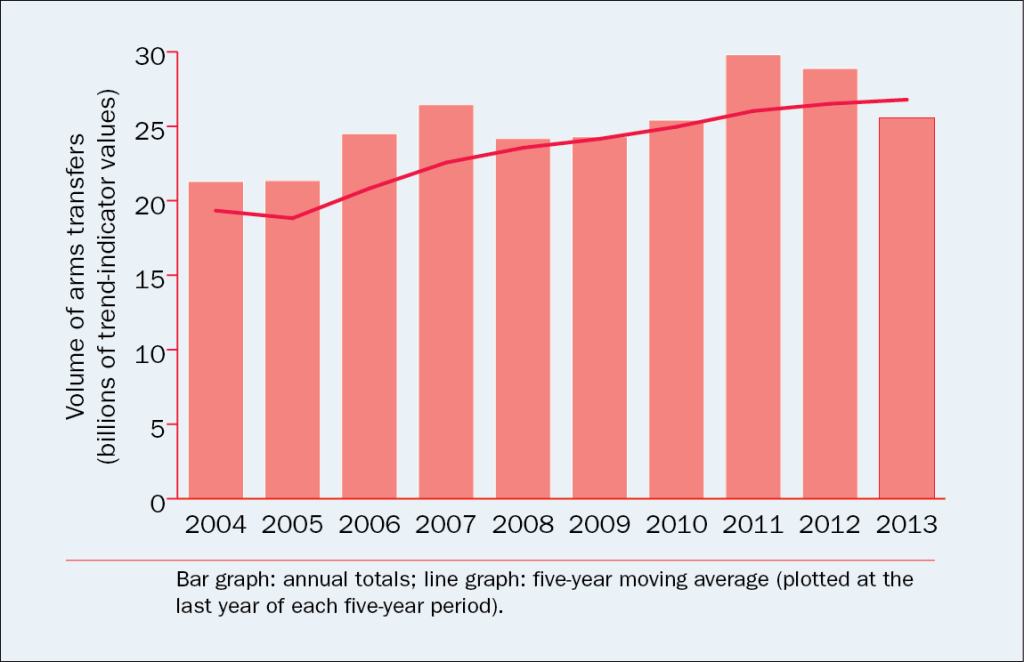 One of the consequences of the financial crisis in the arms-producing countries of Europe, North America and elsewhere has been reductions in military budgets. The resulting reduction in domestic procurement has created additional pressure on arms-producing countries to significantly increase the export share of their total arms sale by seeking new export markets. While governments have long supported arms exports by their national industry, many major suppliers are expanding sales support in the form of government promotion and facilitation of exports, or the relaxation of arms export restrictions.

Another consequence of reduced military budgets was the notable decrease in international arms flows to states in Europe between 2004–2008 and 2009–13. In contrast, flows to Asia and Africa increased. States in Asia and Oceania received nearly half (47 per cent) of all imports of major weapons in 2009–13, and the three largest recipients of major weapons were all Asian: India, China and Pakistan. Combined, they accounted for 32 per cent of all imports. Two Middle Eastern countries returned to the top-five list of recipients: the United Arab Emirates and Saudi Arabia.

A notable trend among the major recipients has been the acquisition of long-range, precision-guided, land-attack missiles. These weapons improve a state’s capacity to threaten or attack small targets deep inside an adversary’s territory while decreasing the risk of putting its own military personnel or high-value platforms in harm’s way.

In the period 2004–13, 16 countries received or ordered guided missiles with ranges over 200 km from abroad and 8 exported them. The proliferation of long-range guided missiles gives rise to several concerns, such as their potential to disrupt regional conventional and nuclear weapon balances, fuel arms races, lead to military escalation, drive interstate crises and increase the likelihood of war.

While some international controls on missile proliferation have been agreed, major supplier states regularly show willingness to export guided missiles, including to regions with high levels of interstate tensions and to countries that possess nuclear arms.

Official and publicly accessible data on arms transfers is important for assessing states’ arms export, arms procurement and defence policies. However, publishing data on arms sales and acquisitions is a sensitive issue for nearly all states.

Similar to 2012, 2013 was a disappointing year for transparency in arms transfers. The number of states reporting their arms imports and exports to the United Nations Register of Conventional Arms (UNROCA) increased in 2013 but remained low.

In the five most recent reporting years (2008–12) several of the top 10 suppliers of major arms have not reported to UNROCA every year and several of the largest importers have been absent for all five years. Participation from some regions has been consistently low in recent years. Only one Middle Eastern state and two African states reported in 2013.

The main importers and exporters of major arms, 2009–13