Is this the beginning of the end of the road for the sometimes semi-official US belief that Cuba is really Washington’s? 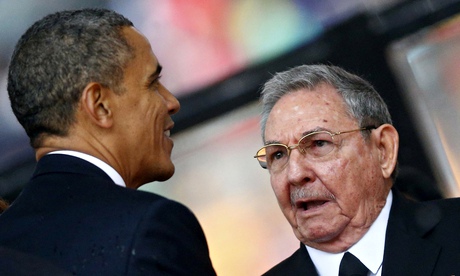 ‘It is Barack Obama (above, with Raul Castro) who has made the big concession to reality by simply recognising that Cuba is now an independent nation.’ Photograph: Kai Pfaffenbach/Reuters

During the signing of the Versailles treaty in 1919, it is said that a delegate left the conference muttering: “What on earth will the historians say about all this?” When the remark was reported to the French prime minister, Georges Clemenceau produced a characteristically good retort – Clemenceau was, after all, a journalist. “Well, one thing they won’t say is that Belgium invaded Germany.”

A modern version of Clemenceau’s robust comment applies equally pointedly in the context of this week’s news that the United States and Cuba are finally to normalise their relations. It is tempting to treat the half-century standoff across the Florida Straits as a case of six of one and half a dozen of the other. Yet one thing the historians cannot say is that Cuba ever attempted to invade or annexe the US. As in the first world war, the big power takes the big responsibility.

That’s why I think the Guardian and others got it wrong when they headlined the normalisation of relations between Washington and Havana as an invitation to Cuba to come in from the cold. The truth was the other way around – and more of a break with history. For it is not Cuba that has decided to rejoin the modern world this week. It is the US.

Until this week’s promise, the US has never, ever, been prepared to accept a conventional bilateral relationship with Cuba. On the contrary, for most of the republic’s history, its view of Cuba has been controlling and, at times, downright predatory.

From its very earliest days, the US has seen Cuba as an American offshore interest. It is more than 200 years since the US, under Thomas Jefferson, first tried to buy Cuba from Spain. At the end of the 19th century America instead seized Cuba from Spain at gunpoint. Later on it leased Cuba back to US-approved Cubans on US terms, which included the retention of the Guantánamo Bay base. After that, it propped up the kleptocratic dictatorship that Fidel Castro’s revolutionaries overthrew in 1959. For the past half-century, relations have been suspended altogether. If these two nations are now to deal with one another as equal sovereign states, it is a first.

This week’s move undoubtedly involves risk for Cuba and its ageing authoritarian government. But it is Barack Obama who has made the big concession to reality by simply recognising that Cuba is now an independent nation. It has taken Washington an unconscionable time to reach this point. More than 50 years ago, one of the key consequences of the ending of the Cuban missile crisis was an implicit concession on the part of President Kennedy that Washington would have to co-exist with the Cuban revolution. That concession has held good for half a century. But it is only this week that de facto recognition of Cuba has become de jure recognition.

It is therefore only partly true to say that the rapprochement between Washington and Havana represents the tidying up of a bit of outstanding business left behind by the cold war, leaving North Korea the cold war’s last lonely outpost. The fuller truth is that Cuba was both a holdover cold war problem and a holdover US backyard problem, but rolled into one. If Cuba had simply been another cold war problem, the US would have got round to recognising it long ago, just as it eventually recognised East Germany. East Berlin, though, was not 90 miles off the Florida Keys, as Havana is.

The Cubans have not made it easy for the US to change its approach. In 2009, Havana spurned an early Obama effort to reopen membership of the Organisation of American States to Cuba, from which it had been suspended in 1962. Later the same year, the arrest of Alan Gross – who was freed this week as part of the choreographed US-Cuba thaw – became a larger roadblock to rapprochement. Hillary Clinton writes in her memoirs that parts of the Cuban leadership probably preferred it that way, and were happier blaming the country’s problems on the US embargo.

Yet what has held everything up more fundamentally has been America’s centuries-old reluctance, reinforced by the cold war, to let go of its hemispheric imperial view of Cuba. Obama and Clinton are not of that school. As Clinton points out in her book: “Many of us in the United States have an outdated picture of what’s happening in our hemisphere.”

Of all modern presidents, Obama was always more likely than most to take such a pragmatic and unimperial step, not least because he never needs to try to carry Florida again. Moreover, as the New York Times columnist Nicholas Kristof observed yesterday, absolutely no one is arguing that the embargo policy has a good chance of working after 100 years even though it has failed for the past 50. So this week’s announcements may indeed mark the beginning of the end of the road for the sometimes semi-official belief that Cuba is in some sense “really” Washington’s.

Don’t get too excited, however. The Cuban issue is certainly not as toxic in US politics as it was even a decade ago. Like the Castro brothers, the original post-Batista Cuban exiles, who live mainly in Florida, New Jersey and New York, are themselves very old now. Younger Cuban voters in the US have other concerns these days, and Cubans are also very much a minority of the US’s Hispanic population and electorate.

But there are plenty of pieces of anti-Cuban legislation and trade embargoes still in force, including the sweeping and draconian 1996 Helms-Burton act, which penalises foreign companies trading with Cuba. This law contains a provision allowing the US Congress to override a presidential order cancelling the embargo. Given that the Republicans will control both houses of Congress from next month, there may be no shortage of volunteers hoping to provoke a showdown. The Obama-Clinton dream of an explosion of trade between the US and Cuba – 40% of US exports already go to Latin America – may be some way off yet.

One question opened up by this week’s announcements is whether it represents a genuine and serious turn in the Obama administration’s foreign policy towards wider radical international problem-solving in the final two years of the presidency. The will may be there. But is the weight? The issues at stake in US relations with countries such as Iran, Israel, Pakistan, Russia and North Korea are far more serious than those with Havana. But in the end everything depends on whether the US has the authority and influence to cajole. Obama’s record here is poor. Relations with Cuba have a kind of period charm by comparison. And, just as in Cuba, it takes two to rumba.

Martin Kettle is an associate editor of the Guardian and writes on British, European and American politics, as well as the media, law and music.