Torture’s Queen: Meet Alfreda Bikowsky, the Senior Officer at the Center of the CIA’s Torture Scandals

19 Dec 2014 – NBC News yesterday called her a “key apologist” for the CIA’s torture program. A follow-up New Yorker article dubbed her “The Unidentified Queen of Torture” and in part “the model for the lead character in ‘Zero Dark Thirty.’” Yet in both articles she was anonymous.

The person described by both NBC and The New Yorker is senior CIA officer Alfreda Frances Bikowsky. Multiple news outlets have reported that as the result of a long string of significant errors and malfeasance, her competence and integrity are doubted — even by some within the agency.

The Intercept is naming Bikowsky over CIA objections because of her key role in misleading Congress about the agency’s use of torture, and her active participation in the torture program (including playing a direct part in the torture of at least one innocent detainee). Moreover, Bikowsky has already been publicly identified by news organizations as the CIA officer responsible for many of these acts.

The executive summary of the torture report released by the Senate last week provides abundant documentation that the CIA repeatedly and deliberately misled Congress about multiple aspects of its interrogation program. Yesterday, NBC News reported that one senior CIA officer in particular was responsible for many of those false claims, describing her as “a top al Qaeda expert who remains in a senior position at the CIA.”

NBC, while withholding her identity, noted that the same unnamed officer “also participated in ‘enhanced interrogations’ of self-professed 9/11 mastermind Khalid Sheikh Mohammed, witnessed the waterboarding of terror suspect Abu Zubaydah and ordered the detention of a suspected terrorist who turned out to be unconnected to al Qaeda, according to the report.”

The New Yorker‘s Jane Mayer, writing yesterday about the NBC article, added that the officer “is still in a position of high authority over counterterrorism at the C.I.A.” This officer, Mayer noted, is the same one who “dropped the ball when the C.I.A. was given information that might very well have prevented the 9/11 attacks; she gleefully participated in torture sessions afterward; she misinterpreted intelligence in such a way that it sent the C.I.A. on an absurd chase for Al Qaeda sleeper cells in Montana. And then she falsely told congressional overseers that the torture worked.” Mayer also wrote that the officer is “the same woman” identified in the Senate report who oversaw “the months-long rendition and gruesome interrogation of another detainee whose detention was a case of mistaken identity.”

Both news outlets withheld the name of this CIA officer even though her identity is widely known among journalists, and her name has been used by various media outlets in connection with her work at the CIA. Both articles cited requests by the CIA not to identify her, even though they provided details making her identity clear. 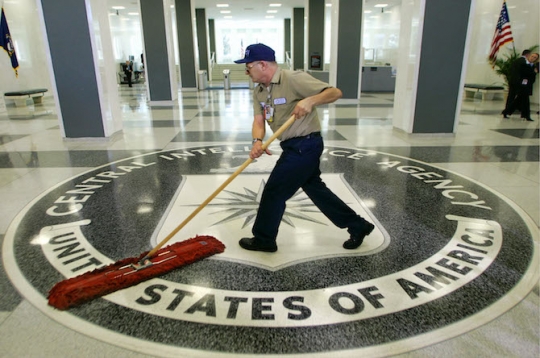 In fact, earlier this year, The Washington Post identified Bikowsky by name, describing her as a CIA analyst “who was tied to a critical intelligence-sharing failure before the Sept. 11, 2001, attacks and the botched 2003 ‘rendition’ of an innocent German citizen thought to be an al-Qaeda operative.” That Post report led to both McClatchy and independent journalist Marcy Wheeler raising questions about the propriety of Bikowsky’s former personal lawyer, Robert Litt, playing a key role in his current capacity as a top government lawyer in deciding which parts of the torture report should be released.

The McClatchy article identified Bikowsky by name as the officer who “played a central role in the bungled rendition of Khaled el-Masri. El-Masri, who was revealed to be innocent, claimed to have been tortured by the agency.” El-Masri, a German citizen who was kidnapped from Macedonia and tortured by the CIA in Afghanistan, was released in 2003 after it was revealed he was not involved in al Qaeda.

Back in 2011, John Cook, the outgoing editor of The Intercept, wrote an article at Gawker, based on the reporting of Ray Nowosielski and John Duffy, naming Bikowsky and pointing to extensive evidence showing that she “has a long (if pseudonymous) history of being associated with some of the agency’s most disastrous boondoggles,” including a key role in the CIA’s pre-9/11 failure to notify the FBI that two known al Qaeda operatives had entered the country.

Earlier that year, the Associated Press reported that a “hard-charging CIA analyst [who] had pushed the agency into one of the biggest diplomatic embarrassments of the U.S. war on terrorism” (the rendering for torture of the innocent El-Masri) was repeatedly promoted. Despite internal recommendations that she be punished, the AP reported that she instead “has risen to one of the premier jobs in the CIA’s Counterterrorism Center.”

The article named her as “Frances,” explaining that the AP “agreed to the CIA’s request to refer to Frances by her middle name because her first is unusual.”

Bikowsky’s name, and her long string of controversial actions, have become such an open secret that she even has her own lengthy, detailed Wikipedia page. The entry describes her as a “career Central Intelligence Agency officer who has headed . . . the Global Jihad unit.”

In the months leading up to the release of the torture report, the CIA and the White House fought to prevent the Senate even from assigning pseudonyms to the CIA officers whose actions are chronicled in the report. The Senate ultimately capitulated, making it difficult to follow any coherent narrative about what these officers did.

As Mayer wrote in yesterday’s article:

Readers can speculate on how the pieces fit together, and who the personalities behind this program are. But without even pseudonyms, it is exceedingly hard to connect the dots.  . . . [W]ithout names, or even pseudonyms, it is almost impossible to piece together the puzzle, or hold anyone in the American government accountable. Evidently, that is exactly what the C.I.A. was fighting for during its eight-month-long redaction process, behind all those closed doors.

Naming Bikowsky allows people to piece together these puzzles and hold American officials accountable. The CIA’s arguments for suppression of her name are vague and unpersuasive, alluding generally to the possibility that she could be the target of retaliation.

The CIA’s arguments focus on an undefined threat to her safety. “We would strongly object to attaching anyone’s name given the current environment,” a CIA spokesperson, Ryan Trapani, told The Intercept in an email. In a follow-up voicemail he added: “There are crazy people in this world and we are trying to mitigate those threats.”

However, beyond Bikowsky, a number of CIA officials who oversaw and implemented the program have already been publicly identified—indeed, many of the key architects of the program, such as Jose Rodriguez, are frequent guests on news programs.

Trapani also argued that the Senate report is “based only upon one side’s perspective on this story” and that an article about Bikowsky “doesn’t require naming a person who’s never had a chance to rebut what’s been said about them.” When The Intercept asked for the CIA’s rebuttal—or Bikowsky’s—to the critical portrayal of her in the Senate report, Trapani declined to offer one. He noted that CIA Director John Brennan had disputed the report’s contention that the agency had misrepresented the value of the interrogation program.