Empathy for animals demands an end to the practice. 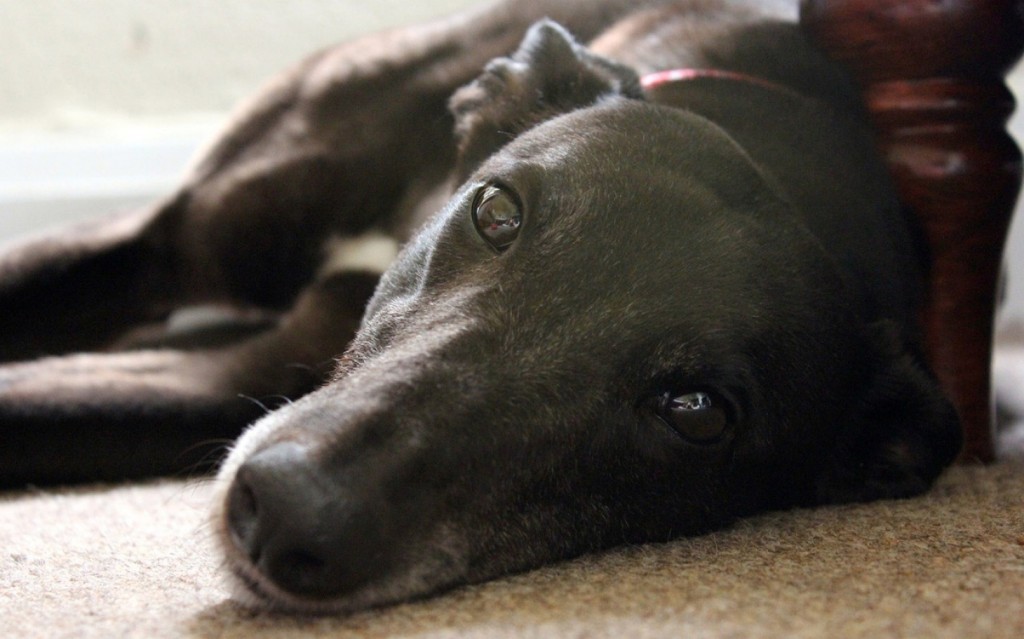 In 2008, my dog Maggie was having a hard time adjusting to the sudden death of the dog she spent her life with, so I made plans to adopt another dog. I worried about how she would react to a visit to the shelters and instead contacted a greyhound rescue organization. We went to see if there were any dogs Maggie liked. We ended up adopting Fuzzy. His racing name was Fuzz’s Fortress.

Of all the dogs in his litter — he had six brothers and two sisters — he was the dog that was named after both his father and mother. His father was Fortress, and his mother was Fuzz’s Whitewater. They have quite a pedigree that can be traced back 30 generations on his father’s side and 36 generations on his mother’s side, all the way to greyhounds in Ireland in the 1820s.

Both of the tracks where Fuzzy raced — Woodlands in Kansas City, Kansas, and Shoreline Star in Bridgeport, Connecticut — had closed down. Fuzzy ran in 38 races and won three. After being retired from racing, he was adopted by a family that later returned him to the rescue organization, and that is how he came to be part of our family, just before his seventh birthday.

When we got him home, Fuzzy climbed the steps cautiously and with great awkwardness, like a very fast giant spider. He was big even for a greyhound, but he had no sense of his size. He seemed to lack all canine social skills. He was unlike any other dog I knew — nervous and withdrawn, rather unresponsive, seemingly stuck in his interior world.

Fortunately, Maggie was able to draw him out of his shell and help him become confident. They were great companions and his emerging joy was contagious. He had a great sense of humor, a lovable personality, and he became a sweet, absolutely wonderful dog.

Fuzzy was diagnosed with osteosarcoma, a bone cancer all too common in greyhounds, and passed away in 2013. In his death, as in the latter part of his life, he was respected and cherished.

Though Fuzzy was unique, his rescue story is not. Many greyhounds are saved from pain and death on the racetrack. But it is shocking that these rescues have to take place and that despite these efforts, greyhounds still suffer terribly and too many die annually in the exploitative racing industry.

In “High Stakes,” a report released last week, Grey2K USA and the American Society for the Prevention of Cruelty to Animals describe grotesque cruelty in the racing industry. Since 2008, the year I adopted Fuzzy, 80,000 greyhounds have been bred to race. Of those for which records have been kept, nearly 12,000 have been injured, sometimes fatally, and 3,000 of those have broken their legs while racing. In Florida, one of the seven states that still allow greyhound racing (the other states are Alabama, Arizona, Arkansas, Iowa, Texas and West Virginia), a greyhound dies on the track every three days. The report documents that dogs suffer broken necks and fractured skulls, malnutrition and lack of medical care, including cases in which animals with broken limbs were left in their cages for days without treatment for their pain.

While racing is dangerous, waiting for races is stressful and uncomfortable. Greyhounds are kept in small, stacked cages for more than 20 hours a day, and are allowed out of the cages to eliminate only three times daily. Oversight of the facilities is weak and racing insiders oppose any effort to provide better care for the dogs.

Facing these facts, racing supporters still insist that they cherish the greyhounds. “The people that own these dogs love these dogs,” said Jeff Kottkamp, a former Florida lieutenant governor turned lobbyist for the Florida Greyhound Association.

In one sense, perhaps, they do love the dogs, the way some people love their cars or love chocolate or love the beach. But this is a love without empathy, without the recognition that we are in relationships with these dogs and they look to us to care for them. They are gentle, sensitive individuals that have needs and interests, vulnerabilities and their own perspectives. Their lives can go better or worse, and their treatment in the racing industry is contrary to their well-being.

When people treat greyhounds as disposable things, they are not only hurting the dogs but also furthering a culture of cruelty and indifference toward animals. If people empathized with these animals, they would want them to flourish. They would help them find genuine companionship and live their lives respected and cherished, as Fuzzy did. They would not cage them, starve them and force them to compete for sport to the point of injury and death.

Lori Gruen is professor and chair of Philosophy at Wesleyan University. She is the author of the new book Entangled Empathy:  An Alternative Ethic for our Relationships with Animals.