From Minsk to Brussels, it’s all about Germany

13 Feb 2015 – Germany holds the key to where Europe goes next. A fragile deal may have been reached on Ukraine, but there’s still no deal with Greece. In both cases, there’s much more than meets the eye.

Let’s start with the grueling Eurogroup negotiation in Brussels over the Greek debt.

Greek officials swear they never received a draft of a possible agreement leaked by Eurogroup bureaucrats to the Financial Times. This draft, crucially, referred to an agreement “amending and extending and successfully concluding,” the current austerity-heavy bailout.

German Finance Minister Wolfgang Schaeuble cut off “amending”. This is the draft that was leaked. But then Greek Finance Minister Yanis Varoufakis called Prime Minister Tsipras – and the statement, still not signed, was rejected. So this was a top Tsipras decision.

Tsipras could not possibly balk – not after previously raising the stakes – as in promising to boost the Greek minimum wage and halt privatizations. He’s still betting the house that the Troika won’t allow a ‘Grexit’. Yet he may be wrong; the possibility of ‘Grexit’ is hovering around 35 percent to 40 percent, and it will be much higher if no deal is reached on the next crunch meeting, Monday.

Tsipras and Eurogroup President Jeroen Dijsselbloem at least agreed that Greek officials and the Troika (EC, ECB, IMF) should start talking “at a technical level.” Translation: they will be comparing the current austerity nightmare with new Greek proposals.

Athens essentially has only two choices. Either the Troika accedes to some form of debt repudiation – real or as a sleight of hand (that’s Syriza’s proposal – an arrangement that fosters growth); or ‘Grexit’ ensues, with Athens creating its own central bank and currency as an independent nation. There’s no third choice; a debt of 175 percent of Greece’s GDP is totally unpayable.

As much as the Troika and its institutional derivatives spin ‘Grexit’ won’t be a big deal, the fact is a Greek debt default could have a more devastating effect than the Lehman Brothers case. It was not the fundamentals at Lehman that caused widespread panic when it went down; but the fear that their derivative exposures would bring down the system.

And cutting through all the spin, what remains, essentially, is what European Commission President Jean-Claude Juncker told Le Figaro a few days ago; it’s out of the question to suppress the Greek debt and, most of all, “there can be no democratic option against European treaties.” There it is, crystal clear: EU institutions work against democracy.

It’s worth remembering Greek Defense Minister Panos Kammenos when he articulated if not a majority view, at least a substantial perception among Greek public opinion; “We want a deal. But if there is no deal, and if we see that Germany remains rigid and wants to blow Europe apart, then we will have to go to Plan B… We have other ways of finding money. It could be the United States at best, it could be Russia, it could be China or other countries.”

And it’s all about NATO 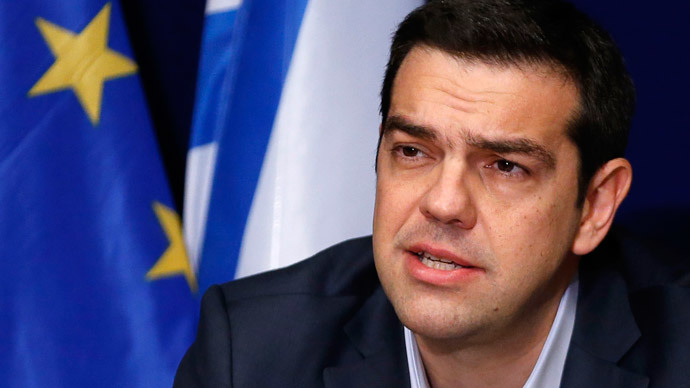 Then there’s Minsk. What was achieved after nearly 17 hours of a grueling marathon is not exactly, in French President Francois Hollande’s words, a “global” agreement and a “global ceasefire” in Ukraine.

There’s every possibility the ceasefire will be nullified only a few minutes after its implementation at midnight this Saturday [14 Feb 2015] – irony of ironies, at the end of Valentine’s Day. Significantly, the final statement bears no important signatures: Putin, Merkel, Hollande and Poroshenko.

German Foreign Minister Steinmeier was cautious, warning Minsk 2.0 is not exactly a breakthrough, but at least de-escalates matters. Merkel preferred to spin that Putin had to pressure the Eastern Ukraine federalists of the DNR and the LNR to agree to the ceasefire.

Predictably, like clockwork, even before the ceasefire, the IMF – under Washington’s orders – suddenly announced it would continue to rape, sorry, help bailout bankrupt, failed state Ukraine with a tranche of$17.5 billion, part of a large $40 billion, four-year “rescue” package. Translation: Kiev’s goons now have fresh cash to throw at a war they don’t want to give up on.

Poroshenko himself took no time to torpedo the ceasefire – spinning there’s no autonomy granted to the areas controlled by the federalists, and refusing to confirm Putin’s assertion that Kiev has agreed to terminate the vicious economic blockade of Donbass.

The precise contours of the demilitarized zone – bordering one frontline in September and a very different frontline five months later – remain a mystery. And Washington immediately turned the “withdrawal of foreign forces” clause into a joke. The Pentagon has already announced it will begin training Ukraine’s National Guard next month.

Minsk 2.0 hardly qualifies as a band-aid. Ukraine is unredeemable. It would only come back from the dead if a tsunami of cash – almost equivalent to the cost of German reunification – were poured in. Needless to add, no one in Europe wants to dish out even a few devalued euro.

This was, remains, and will continue to be, essentially about NATO expansion. Washington and the Kiev marionettes will never allow any constitutional reform that lets the Donbass block NATO embedded in Ukraine. So the ‘Empire of Chaos’, in a nutshell, won’t cease from using Ukraine to bully Russia. The ‘Empire of Chaos’ is not exactly in the business of nation building – quite the contrary.

And that brings us to the crucial role played by Germany – with France as sidekick.

Chancellor Merkel had to go to Moscow to negotiate with Putin because she saw which way the wind was blowing – counterproductive sanctions; Ukrainian economy in free fall; Kiev’s goons defeated on the battlefield. That was as much an imperative as a crucial demarcation away from the imperial NATO expansion obsession.

As Immanuel Wallerstein has observed Moscow is pursuing “a careful policy. Not totally in control of the Donetsk-Lugansk autonomists, Russia is nonetheless making sure that the autonomists cannot be eliminated militarily. The Russian price for real peace is a commitment by NATO that Ukraine is not a potential member.”

Hollande provided the perfect cover for Merkel. It was Hollande who publicly supported autonomy – as in federalization – for the DPR and the LPR. At the same time, both Merkel and Hollande know that Kiev will never de facto accept it (and even a substantial portion of the Donbass only accepts federalization as a stepping stone to eventual secession and union with Russia.)

Merkel – at least in terms of German public opinion – did manage to achieve her goal, emerging as a victor (“The world chancellor,” as the tabloid Bild coined it) after her frequent-flyer marathon. Putin also emerged a victor of sorts – as Merkel essentially rehashed proposals he made months ago. So yes, whichever angle we look at it, this was in fact a Moscow-Berlin deal.It’s easy to see who is extremely disgruntled and will do everything to bomb it; Washington, Kiev, London, Warsaw and the hysterical “Russia is invading” Baltic states.

Last but not least, let’s call attention to the monumental white elephant in the room. Minsk 2.0 was conducted in the total absence of the ‘Empire of Chaos’ and the (increasingly irrelevant) “special relationship” British minions.

Slowly but surely, public opinion across Europe – and especially Germany – is experiencing a tectonic shift. The obsession by the ‘Empire of Chaos’ to further weaponize Kiev has horrified millions – resurrecting the specter of a war in Europe’s eastern borderlands. Not only in Germany but also in France, Italy, Spain, there is a growing continental consensus against NATO.

Even at the height of a vicious Russia demonization campaign unleashed by virtually the whole German corporate media, a Deutschland Trend survey revealed that most Germans are against NATO troops in Eastern Europe. And no less than 49 percent would rather see Germany position itself as a bridge between East and West. The leadership in Beijing definitely took note.

So it’s tempting to hop on the Merkel/Hollande peace train as the heart of Europe finally exercising their sovereignty and frontally defying the ‘Empire of Chaos’. Perhaps that could be the embryo of a German-French partnership for peace in Europe and even beyond, from the Middle East to Africa.

That would frontally antagonize NATO’s screenplay – which implies the ’Empire of Chaos’ ruling uncontested over Europe, the Middle East and even across Eurasia, with continental European powers, especially Germany, France and yes, Russia, at the margins.

Sooner or later European politicians will have to wake up and smell the coffee; the notion of a German-French-Russian pan-European peace/trade partnership is way more popular than reflected in failed corporate media.

Now it’s up to Germany to clean up its act on Greece. The choice is stark. The EU may embark on a quadruple-dip recession as the ECB further destroys what is left of the European middle class. Or Germany, reflecting the thinking among its captains of industry, may tell the EU – Troika included – that the way to go is to shift the strategic, trade and political focus from West to the East. That would start by stuffing the corporate US-devised TTIP treaty – that’s NATO on trade. After all, this is going to be the Eurasian century – and this train has already left the station.