‘Islamic State’ Mystery: The Anti-History of a Historic Phenomenon

The IS phenomenon is ahistorical and raises questions about its rapid geopolitical expansion despite lack of enthusiasm for its cause among ordinary people. 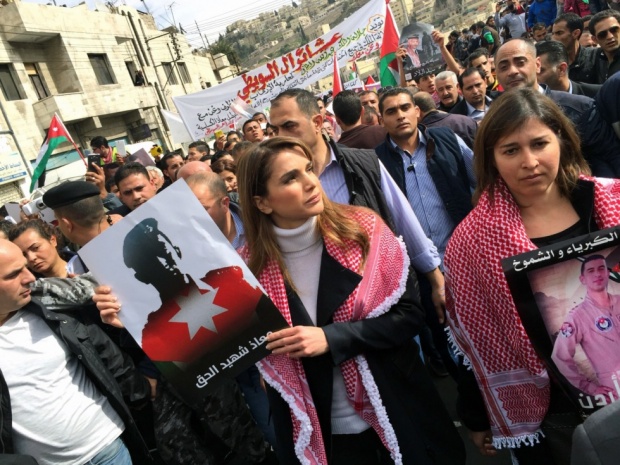 Jordanian Queen Rania holds a placard during a demonstration in the capital Amman to express solidarity with the pilot murdered Islamic State, 6 Feb (AFP)

17 Feb 2015 – From a people’s history (“history from below”, or “social history from below”) perspective, the so-called Islamic State (IS) phenomenon is at best, hard to explain, and at worst, beyond any comprehension.

True, at present, the Middle East region is the ideal incubator for violent militancy and political radicalisation. However, it is difficult to place IS even within that context without raising a host of questions that remain unanswered.

Starting with the first US-led western war in Iraq (1990-91), then a decade-long blockade, then the invasion of Iraq (2003), and the earlier invasion of Afghanistan (2001), the Middle East has undergone a rapid state of radicalisation that was more or less consistent with the violence visited upon the region by the US and its allies.

Coupled with the western-backing of Israel over the course of decades, and the constant support lent by the West to various corrupt and utterly violent Arab dictators, generation after generation of angry, radicalised, unemployed and humiliated youth was very much a reasonable and predictable outcome. Some of us warned tirelessly of the looming further radicalisation in the Middle East before and during the last Iraq war. We spoke of the destabilisation of the whole region, and that the conflict would eventually spill over into other countries, and would not be confined to Iraq or Afghanistan.

The Arab Spring could have been the political platform to offer a positive outlet for change, to absorb the existing anger and channel it, with time, into constructive energy that would reverse the tide of radicalisation, hopelessness and growing militarism.

That too was suffocated by the same traditional forces that engendered corruption and violence in the first place.

The post-Arab Spring reality has wrought a worst-case scenario even the most pessimistic amongst us couldn’t imagine. The “counter revolutions” backed by western military interventions remoulded the old reality, but in a much more violent and oppressive way than before. Moreover, it created a vacuum that was naturally filled by non-state actors, sometimes tribes – as in the case of Yemen, and partly in Libya – and other times by militant groups as is the case in Syria.

Most notorious among those were the so-called Islamic State. But that is where the logic of the story begins to dissipate.

Regardless of how one is to explain the rise of IS from a historical point of view, one runs into too many limitations facing any existing argument. In fact, there are more questions than answers.

People’s history attempts to study certain political and other phenomena by examining the underlying circumstances of history that go beyond the intrigues, interests and conspiracies of competing elites. It looks at the lives of ordinary people, united by the most common historical denominators to explain collective occurrences in the past or present, and attempts to explore future possibilities.

These variables could be as general as prolonged economic hardship and as specific as a singular event: war. The specific thinking process of the Egyptian military might not qualify to be an issue of concern to people historians, but the military’s role in managing the 25 January, 2011 revolution, and the coup on 3 July 2013 against the democratically-elected President Mohammed Morsi, is certainly a major variable in whatever collective phenomena that followed.

But can IS be considered a collective phenomenon?

Judging by the number of individuals we think might be involved in the formation of the group and their supposed outreach beyond certain geographies, IS could in fact be recognised as a collective phenomenon. IS members and supporters are heavily present in Iraq and Syria, but claim influence in other Middle Eastern regions including Sinai, Egypt, Libya and elsewhere.

In fact, they entered the Libyan scene, itself crowded with many militias and other violent manifestations, in a dramatic away by butchering 21 Egyptian labourers working in that war-torn North African country. The rationale given for their murder is not very clear, but the tacit understanding is that they were Christians, and that was meant to justify the slaughter.

But a puzzling matter exists. While al-Qaeda during its most violent phases won the support of many people in the region, IS is hardly popular. Even the support of Salafist jihadists here and there is diminishing.

In fact, while many despise them, conspiracy theorists are busy linking them to Israel, the US and other Arab regimes, which could be considered the ultimate disavowal of the group.

Those who half-heartedly supported them during the first phase of the Syria civil war quickly turned against them. IS was later accused of being a Syrian intelligence outlet, or at least working closely with the regime with the aim of breaking the ranks of the opposition. That theory was marginalised quickly as IS began butchering Syrian soldiers, although the matter received scant media coverage.

Still, IS is growing; its tentacles are stretching further despite the declared US-led war to destroy it with the help of many powerful allies.

IS was arguably an outcome of various alliances that took place starting in Iraq 10 years ago, between al-Qaeda and other regional groups; they didn’t appear as a serious force until recently. Yet, in the matter of two years or less, it managed to achieve what al-Qaeda – which was much more popular for opposing the US and its allies – couldn’t achieve in nearly 15 years.

Within a matter of months, IS managed to claim and sustain its control over massive territorial gains in Syria but much more rapidly in Iraq, to operate a relatively functioning economy and to develop a most remarkable media apparatus. It even developed its own school curriculum.

From the notoriety of its methods, it seems that IS is little concerned about its own popularity among ordinary people, who are its ultimate victim. This has been demonstrated time and again, most notably in the killing of the Jordanian pilot, Muaz Kasasbeh, and the Egyptian workers in Libya and hundreds of cases that were less interesting for media outlets.

Beyond the ‘savages’ argument

While violence and war radicalise people, the size and nature of the IS phenomenon doesn’t seem consistent with its rational historical context.

Even the sectarianism argument rarely addresses the point. IS victims come from every class, religion, ethnicity, gender and political group. Most of their victims are in fact Sunni Muslim. If one follows the blood trail of their actions, one can rarely spot definable commonalities, or a unified rationale, aside from the fact that it is all “barbaric” behaviour bent on instilling fear.

The easily defensible “barbarians,” “savages” and “psychopaths” theories are last resorts for those who cannot find a plausible explanation for this kind of behaviour.

Some find IS’s behaviour as a handy opportunity to bash Islam, to the puzzlement of most Muslims, who know full well that setting people ablaze goes against every value that Islam stands for. Even al-Qaeda rejected IS, because of its brutal behaviour, which itself is telling.

However, none of this explains IS’s political savvy, let alone impressive media style. Indeed, IS actions seem to be politically calculated in such a way that appears to coincide with the interests of regional and western powers.

For instance, the group announced its existence in Sinai at a time when Egypt’s strongman, Abdul Fattah al-Sisi, was desperate to create distractions from his political and economic woes at home.

They butchered the Egyptian labourers just as Sisi was itching to get involved in Libya, to support forces allied with the CIA-trained General Khalifa Haftar, and as Sisi signed a lucrative deal with France to purchase Rafale French fighter jets, that no one seemed interested to buy.

Egyptian authorities had a 50-day notice to negotiate the release of the workers. Despite pleas by their families, it did next to nothing. Once they were killed, Egypt went to war, and within 24 hours signed a contract with France to purchase the war-planes.

It is important to note that France has taken a leadership position in the NATO war on Libya, and is largely responsible for the mess created since the ousting of murdered Libyan leader Muammar Gaddhafi. France is in need of regional backing for its Libya policy, and Sisi’s large army seems the best possible option.

It is astonishing that IS’s most disturbing videos seem to fit almost perfectly into existing political agendas.

Unlike al-Qaeda, IS’s religious agenda is hardly as pronounced. They carry out all sorts of bizarre actions in the name of Islam, but seem to lack deep Islamic theology or forward thinking vision. They are intensely militaristic and their body of Islamic literature is selective and lacking.

This is what was concluded by those who spent time with IS, expecting that the religious component would be the overriding element in their war. Hardly.

Yet, without major popular backing, and removed from much of the historical context in the Middle East, they continue to grow, and appear in the most politically convenient locations.

Thanks to IS’ despicable act of burning the pilot, Jordan is no longer polarised about their country’s war in Syria.  Egypt is following the same path of intervention, thanks to the butchering of the Egyptian workers.

This is not to propose a specific conspiracy or to purport to understand the exact dynamics that propel IS, but to raise questions: prominent among them is that IS’s mysterious roots, its sudden advent, massive growth, and unexplainable geopolitical expansion is inconsistent with the lack of enthusiasm for them and their cause among ordinary people.

In fact, if judged exclusively through the prism of people’s history, the IS phenomenon is ahistorical.

By exploring that assumption, IS can be better understood, and perhaps confronted. The answer does not lie in understanding either Islam or Muslims, but by following the money trail, regional intrigues, and obvious and not so-obvious competing political agendas. Simply put, ordinary people are not the force behind IS.

Not only does IS seem to have no strategy of its own, but its “strategy” is inexplicably and enigmatically consistent with those who are seeking to maintain military intervention, regionally and internationally, as the only way to handle Middle East crises.

If we accept that hypothesis, we are likely to change the way we explain and think about IS altogether.