Dr. Helen Caldicott’s nuclear disarmament seminar in New York City intrigued, educated — and scared the wits out of you. 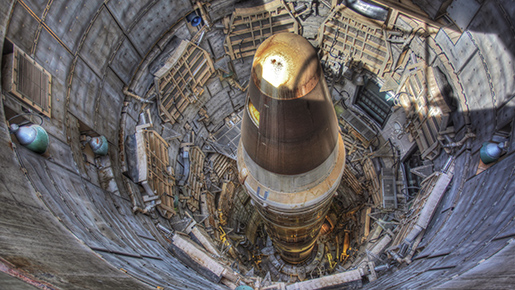 Due to, among other things, modernization, nuclear disarmament has receded further on the horizon than ever. (Photo: Steve Jurveston / Wikimedia Commons)

4 Mar 2015 – The Dynamics of Possible Nuclear Extinction is the cheerful title of a symposium that Dr. Helen Caldicott hosted this past weekend at the Academy of Medicine in New York City. In truth, the dynamics that could generate  nuclear extinction are pretty simple: leaders of nuclear powers, such as the United States and Russia, failing to acknowledge how the gap between a nascent stand-off (such as Ukraine) and nuclear war, however reassuring it might seem, can close quickly. Or any number of accidents, as documented by Eric Schlosser in his book Command and Control: Nuclear Weapons, the Damascus Accident, and the Illusion of Safety, could repeat themselves and our luck could run out. Meanwhile, looming in the background like an understudy on the world stage is nuclear terrorism.

That said, Dr. Caldicott assembled a heady mix of activists and experts that resulted in an energizing event far removed from the stereotype of an academic conference. Below are some of the highlights, replete with incongruities, and the responses they evoked in me. First, allow me to say what a privilege it was to witness Dr. Caldicott, who moderated the first day, in action.

The Dynamics of Possible Nuclear Extinction was all that you can expect from a symposium slash conference: it informed, inspired action, and no doubt helped those in attendance recharge their nuclear batteries.

You can find it streamed here.