It’s tempting to call ISIS “medieval” murderers. But from mass murder to drone strikes, atrocity is very much a part of our modern experience. 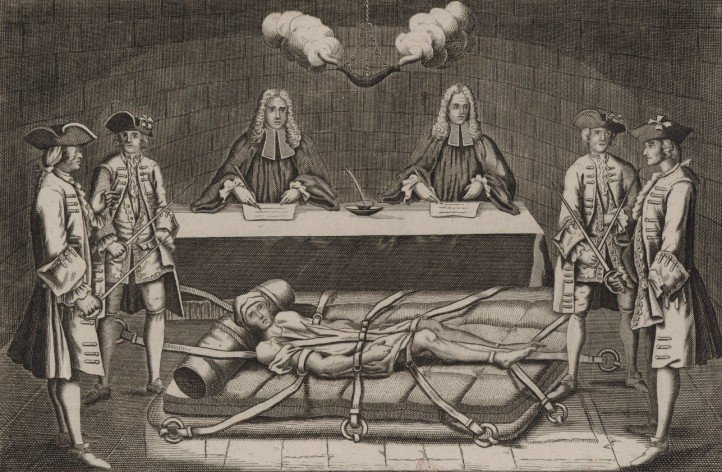 The description of the death of Robert-Francois Damiens, the man who attempted to kill Louis XV, is not for the faint-hearted.

On March 2, 1757, in front of a crowd of spectators, Damiens was drawn and quartered, which means that his limbs were tied to four horses that were then urged to gallop toward the four points of the compass.

To discover why six horses were needed in the end and why various additional tortures were inflicted on the convict, you need to turn to the detailed description that opens French philosopher Michel Foucault’s Discipline and Punish, perhaps the most blood-curdling beginning to an academic book ever.

In this 1975 masterpiece, Foucault argued that punishment, which was public and dramatic for much of recorded history, became progressively more hidden during the construction of the modern penal system. As part of this pivotal transformation, Foucault noted, “it is the certainty of being punished and not the horrifying spectacle of public punishment that must discourage crime.”

Institutions, in other words, replaced the theater of cruelty. What was once spectacle has become hidden from our eyes.

It’s hard not to view the very public atrocities committed by the Islamic State (ISIS) against the backdrop of this history.

ISIS too has staged horrifying spectacles. It has beheaded journalists and burned a Jordanian pilot alive. It has made films of these events to gather the largest possible audience of spectators. With more of a domestic audience in mind, it has also engaged in less visible but no less gruesome acts, such as crucifixions and mass executions reminiscent of the Nazi Einsatzgruppen.

To a certain extent, these acts are intended as punishment. The victims stand in for all the regional and international forces that are bombing ISIS, killing civilians with drones, or imprisoning Muslims in places like Guantanamo. It is not conventional warfare, for ISIS commits many of its atrocities with no particular military objective in mind. Rather, the acts are meant to instill fear and make adversaries think twice about challenging ISIS on the battlefield.

Like the execution that Foucault described, these atrocities also have considerable symbolic meaning. Many commentators and politicians have described ISIS as “medieval” in its outlook. Graeme Wood’s long analysis this month in The Atlantic focuses on the care with which ISIS ties its rhetoric and actions to the millenarian, prophetic traditions of early Islam (a point emphasized as well by Emile Nakleh in his critique of the White House confab on countering extremism).

Or as Washington Post columnist Kathleen Parker recently put it, we are “engaged in a religious war at the behest of zealots whose bloodlust boils down to didactic theater. Herein lies a crucial point in our deliberations: To defeat an enemy clinging to the first millennium B.C., it may be necessary to huddle around a single candle and try to think as a Middle Ager.”

Don’t be fooled, in other words, by the thoroughly modern trappings of ISIS: its video editing skills, social media savvy, or use of sophisticated weapons. The atrocities they commit are messages from another century using human bodies as the letters. And, according to Parker, we have to put ourselves into that mindset to both interpret the messages and craft the appropriate response.

One person who has adopted that mindset is Anders Breivik, the Norwegian serial murderer who killed more than 70 people in a rampage in Oslo in 2011.

What we saw of his atrocity seemed quite up-to-date. He used a car bomb to blow up government buildings in downtown Oslo, killing eight people. Then he used the latest weaponry to gun down 69 participants at a Labor Party youth gathering on the nearby island of Utoya. Even the reasoning for the attack was modern in its logic, for he didn’t kill the Muslims he so disliked but the political representatives he blamed for the policies of multiculturalism and immigration that had facilitated the diversification of Norway.

But Breivik’s original plan, as revealed in 2012 court testimony, was somewhat different. He was hoping to take hostage top Norwegian Labor Party leaders, including former president Gro Harlem Brundtland, force them to listen to his indictment of their sins, and then decapitate them with a bayonet — all filmed on his iPhone before uploading the images to the Internet.

“It is a strategy taken from al-Qaeda,” Breivik explained, though he also cited the importance of beheadings in early Christian Europe. He added, “It is a very potent psychological weapon.”

But 13 centuries separate us from the psychology of the Middle Ages. We no longer have access to that world and therefore can’t help but project our modern sensibilities onto the past. However much ISIS or Breivik is committed to returning the world to the 7th century, their atrocities have a more complicated genealogy that stretches from the beheadings of the Middle Ages through the tortures of 18th-century France all the way up to the present day.

The Transformation of Atrocity

It’s comforting to think of them as savages that aren’t part of modern civilization. Alas, atrocity is as much part of our modern experience as it was for our precursors. Indeed, large-scale atrocities define the modern experience (the Holocaust, the bombing of Hiroshima and Nagasaki, the “killing fields” of Cambodia).

But as Foucault and others have pointed out, we’ve transformed our relationship to public displays of violence.

In the modern day, for instance, public atrocities take place outside the rule of law. The burning of heretics in the Middle Ages or the execution of regicides in the Enlightenment period were official acts, sanctioned by governments and institutions like the Catholic Church. They defined the law. But both Breivik and ISIS are considered outlaws — outside national and international law.

Consider the outbreak of lynching that took place in the United States from the second half of the 19th century to the Civil Rights era. They very much resembled the public executions of 18th-century France. They were gruesome. They were public. And they were meant to send a message. Here, for example, is a description of a lynching in Kirvin, Texas: “three black men, two of them almost certainly innocent, were accused of killing a white woman and, under the gaze of hundreds of soda-drinking spectators, were castrated, stabbed, beaten, tied to a plow, and set afire in the spring of 1922.”

The legal system during the Jim Crow era was heavily tilted against African Americans, so the lynch mobs didn’t have justice on their minds when they took the law into their own hands. They perpetrated a ritualized atrocity that would burn into the minds of anyone who dared to challenge the rigid racial hierarchies of the time. For many people, this institutionalized racism was “the law.” Transgression required punishment precisely because the official legal system didn’t recognize that an African American flirting with a white woman — the alleged reason for the lynching of 14-year-old Emmett Till in 1955 — was a punishable offense.

Here, then, is the reason for the very public and very graphic violence of ISIS. The rule of law, to the extent that it exists in Iraq and as it is embodied in international norms, does not conform to the implicit standards of the extremist organization. Only through horrifying spectacle can ISIS proclaim and reinforce the rules it lives by.

This is not medieval. In fact, it’s what makes ISIS modern — as modern as a lynch mob, albeit one that’s taken on the trappings of a state.

The theater of cruelty hasn’t been entirely privatized in the modern era. Some governments continue to put violence on display to convey the same messages that the French state promulgated with its execution of Damiens.

The North Korean authorities still hold public executions, for instance, as does Saudi Arabia (along with public floggings). Both countries also maintain prisons, where punishment takes place remotely. But the very public nature of certain punishments suggests that these governments are concerned that significant segments of the population are flouting the official laws and need to be reminded of the state’s awesome power.

If Saudi Arabia and North Korea still follow the example of the 18th-century French state, the U.S. use of drones for targeted assassinations represents the new sensibility that Foucault associated with the development of the penal system.

Drone attacks are no less violent or disturbing than the murder of Damiens. But they’ve been placed in a different context that makes them palatable to a majority of Americans (though not to most of the world). They’re not public spectacles. They are the natural extension of an omnipresent surveillance system. And they’re embedded in the rule of law (or so their supporters claim).

This last quality is perhaps the most controversial The U.S. government insists that the use of drones is consistent with both U.S. and international law. Congress passed an authorization to use military force (AUMF) in the wake of the September 11 attacks, which the Bush and Obama administrations have used to justify the use of drone strikes against enemy combatants anywhere in the world. When faced with the legal conundrum of targeting American citizens — such as Anwar al-Awlaki — the Justice Department drafted a memo to justify such strikes as well. In a 2012 speech, Attorney General Eric Holder spelled out the conditions for such strikes: “if the individual poses an imminent threat, capture is not feasible, and the operation were executed in observance of the applicable laws of war.”

Drones are also an extension of the U.S. panopticon, the extensive surveillance system that Washington maintains through satellites, cell phone and Internet monitoring, and other techniques. Foucault argued that the spectacle of punishment before an audience was transformed, under the penal system, into the surveillance of prisoners by the prison administration. We the people no longer needed to see the enactment of punishment. The public gaze had become institutionalized as the panoptical gaze of the prison authorities.

Drone attacks are similarly invisible to the U.S. public but very much part of the panoptical gaze of the national security complex. We almost never see pictures of the victims. The U.S. government does not put videos on the Internet as a warning to all those who might consider joining al-Qaeda or ISIS. The government further reassures us that the right people are being punished. And indeed, if the American public saw videos of innocent people killed in the “collateral damage” of drone attacks, their support for the program would likely decrease substantially.

It’s precisely because these are not public spectacles, at least for an American audience, that Washington can continue to argue that it is a mark of civilization to kill people in this manner.

And yet, drone attacks threaten to undermine the rule of law that the U.S. government has so carefully attempted to employ to justify the program. According to Philip Alston, the former UN special rapporteur on extrajudicial, summary, or arbitrary executions, “if other states were to claim the broad-based authority that the United States does, to kill people anywhere, anytime, the result would be chaos.” Just as the judicial system claims the only legal authority to kill people in the United States, the U.S. government has adopted a similar authority internationally.

The Obama administration response to the military interventions of the Bush years was to gradually replace boots on the ground with drones in the air. But this drone campaign has not reinforced the rule of law, has not established fair principles of justice, and has certainly not endeared people in the targeted regions to the United States.

What ISIS is doing is reprehensible. But our less visible, more modern, and legally rationalized extrajudicial murders, with their inevitable collateral damage, should not make us sleep any better at night.

John Feffer is the director of Foreign Policy In Focus.