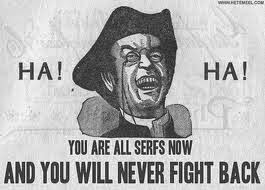 Once upon a time—and a fairly long time it was—most of the thickly settled parts of the world had something called feudalism. It was a way of organizing society hierarchically. Typically, at the very top there was a sovereign (king, prince, emperor, pharaoh, along with some high priests). Below the sovereign were several ranks of noblemen, with hereditary titles. Below the noblemen were commoners, who likewise inherited their stations in life, be it by being bound to a piece of land upon which they toiled, or by being granted the right to engage in a certain type of production or trade, in case of craftsmen and merchants. Everybody was locked into position through permanent relationships of allegiance, tribute and customary duties: tribute and customary duties flowed up through the ranks, while favors, privileges and protection flowed down.

It was a remarkably resilient, self-perpetuating system, based largely on the use of land and other renewable resources, all ultimately powered by sunlight. Wealth was primarily derived from land and the various uses of land. Here is a simplified org chart showing the pecking order of a medieval society.

Feudalism was essentially a steady-state system. Population pressures were relieved primarily through emigration, war, pestilence and, failing all of the above, periodic famine. Wars of conquest sometimes opened up temporary new venues for economic growth, but since land and sunlight are finite, this amounted to a zero-sum game.

But all of that changed when feudalism was replaced with capitalism. What made the change possible was the exploitation of nonrenewable resources, the most important of which was energy from burning fossilized hydrocarbons: first peat and coal, then oil and natural gas. Suddenly, productive capacity was decoupled from the availability of land and sunlight, and could be ramped up almost, but not quite, ad infinitum, simply by burning more hydrocarbons. Energy use, industry and population all started going up exponentially. A new system of economic relations was brought into being, based on money that could be generated at will, in the form of debt, which could be repaid with interest using the products of ever-increasing future production. Compared with the previous, steady-state system, the change amounted to a new assumption: that the future will always be bigger and richer—rich enough to afford to pay back both principal and interest.

With this new, capitalistic arrangement, the old, feudal relationships and customs fell into disuse, replaced by a new system in which the ever-richer owners of capital squared off against increasingly dispossessed labor. The trade union movement and collective bargaining allowed labor to hold its own for a while, but eventually a number of factors, such as automation and globalization, undermined the labor movement, leaving the owners of capital with all the leverage they could want over a demoralized surplus population of former industrial workers. In the meantime, the owners of capital formed their own pseudo-aristocracy, but without the titles or the hereditary duties and privileges. Their new pecking order was predicated on just one thing: net worth. How many dollar signs people have next to their name is all that’s necessary to determine their position in society.

But eventually almost all the good, local sources of hydrocarbon-based energy became depleted, and had to be replaced using lower-quality, more remote, harder-to-produce, more expensive ones. This took a big bite out of economic growth, because with each passing year more and more of it had to be plowed right back into producing the energy needed to simply sustain, never mind grow, the system. At the same time, industry produced a lot of unpleasant byproducts: environmental pollution and degradation, climate destabilization and other externalities. Eventually these started showing up as high insurance premiums and remediation costs for natural and man-made disasters, and these too put a damper on economic growth.

Population growth has its penalties too. You see, bigger populations translate to bigger population centers, and research results show that the bigger the city, the higher is its energy use per capita. Unlike biological organisms, where the larger the animal, the slower is its metabolism, the intensity of activity needed to sustain a population center increases along with population. Observe that in big cities people talk faster, walk faster, and generally have to live more intensely and operate on a tighter schedule just to stay alive. All of this hectic activity takes energy away from constructing a bigger, richer future. Yes, the future may be ever more populous (for now) but the fastest-growing form of human settlement on the planet is the urban slum—lacking in social services, sanitation, rife with crime and generally unsafe.

What all of this means is that growth is self-limiting. Next, observe that we have already reached these limits, and have in some cases gone far beyond them. The currently failing fad of hydraulic fracturing of shale deposits and steaming oil out of tar sands is indicative of the advanced state of depletion of fossil fuel sources. Climate destabilization is producing ever more violent storms, ever more severe droughts (California now has just a year’s worth of water left) and is predicted to wipe out entire countries because of rising ocean levels, failing monsoon seasons and dwindling irrigation water from glacial melt. Pollution has likewise reached its limits in many areas: urban smog, be it in Paris, Beijing, Moscow or Teheran, has become so bad that industrial activities are being curtailed simply so that people can breathe. Radioactivity from the melted-down nuclear reactors at Fukushima in Japan is showing up in fish caught on the other side of the Pacific Ocean.

All of these problems are causing a very strange thing to happen to money. In the previous, growth phase of capitalism, money was borrowed into existence in order to bring consumption forward and by so doing to stimulate economic growth. But a few years ago a threshold was reached in the US, which was at the time still the epicenter of global economic activity (since eclipsed by China), where a unit of new debt produced less than one unit of economic growth. This made borrowing from the future with interest no longer possible.

Whereas before money was borrowed in order to produce growth, now it had to be borrowed, in ever-larger amounts, simply to prevent financial and industrial collapse. Consequently, interest rates on new debt were reduced all the way to zero, in something that came to be known as ZIRP, for Zero Interest Rate Policy. To make it even sweeter, central banks accepted the money they loaned out at 0% interest as deposits, which earned a tiny bit of interest, allowing banks to make a profit by doing absolutely nothing.

Unsurprisingly, doing absolutely nothing proved to be rather ineffective, and around the world economies started to shrink. Many countries resorted to forging their statistics to paint a rosier picture, but one statistic that doesn’t lie is energy consumption. It is indicative of the overall level of economic activity, and it is down across the entire world. A glut of oil, and a much lower oil price, is what we are currently witnessing as a result. Another indicator that doesn’t lie is the Baltic Dry Index, which tracks the level of shipping activity, and it has plummeted too.

And so ZIRP set the stage for the latest, most queer development: interest rates have started to go negative, both on loans and deposits. Good bye, ZIRP, hello, NIRP! Central banks around the world are starting to make loans at small negative rates of interest. That’s right, certain central banks now pay certain financial institutions to borrow money! In the meantime, interest rates on bank deposits have gone negative as well: keeping your money in the bank is now a privilege, for which one must pay.

But interest rates are certainly not negative for everyone. Access to free money is a privilege, and those who are privileged are the bankers, and the industrialists they fund. Those who have to borrow to finance housing are less privileged; those who borrow to pay for education even less so. Those not privileged at all are those who are forced to buy food using credit cards, or take out payday loans to pay rent.

The functions which borrowing once played in capitalist economies have been all but abandoned. Once upon a time, the idea was that access to capital could be obtained based on a good business plan, and that this allowed entrepreneurship to flourish and many new businesses to be formed. Since anybody, and not just the privileged, could take out a loan and start a business, this meant that economic success depended, at least to some extent, on merit. But now business formation has gone in reverse, with many more enterprises going out of business than are being formed, and social mobility has become largely a thing of the past. What is left is a rigidly stratified society, with privileges dispensed based on hereditary wealth: those at the top get paid to borrow, and get to surf on a wave of free money, while those at the bottom are driven ever further into debt servitude and destitution.

Can NIRP underpin a new feudalism? It certainly cannot reverse the downward slide, because the factors that are putting limits on growth are not amenable to financial manipulation, being physical in nature. You see, no amount of free money can make new natural resources spring into existence. What it can do, however, is freeze the social hierarchy among the owners of capital—for a while, but not forever.

Everywhere you care to look, the ever-shrinking economy eventually results in populist revolt, war and national bankruptcy, and these cause money to stop working in a number of ways. There is usually devaluation, bank failures, inability to finance imports, and the demise of pensions and of the public sector. The desire to survive causes people to focus on getting direct access to physical resources, distributing them among friends and family.

In turn, this causes market mechanisms to become extremely opaque and distorted, and often to stop functioning altogether. Under these circumstances, how many dollar signs someone has next to their name becomes rather a moot point, and we should expect the social hierarchy among the owners of capital to become unstable and capsize. A few among them have the talents to become warlords, and these few fleece the rest out of existence. But overall, in a situation where financial institutions have failed, where factories and other enterprises are no longer functioning, and where real estate holdings have been overrun by marauding mobs and/or invaded by squatters, one’s net worth becomes rather difficult to compute. And so we should expect the org chart of the post-capitalist society, in spreadsheet terms, to look like this. (“#REF!” is what Excel displays when it encounters an invalid cell reference in a formula.)

A good, precise term for this state of affairs is “anarchy.” Once a new, low level of steady-state subsistence is reached, the process of aristocratic formation can begin anew. But unless a new source of cheap fossil fuels is somehow magically discovered, this process would have to proceed along the traditional, feudal lines.

Dmitry Orlov, born 1962, is a Russian-American engineer and writer. He was born in Leningrad (now Saint Petersburg) and moved to the US at the age of 12. He has a BS in Computer Engineering and an MA in Applied Linguistics and was an eyewitness to the collapse of the Soviet Union over several extended visits to his Russian homeland between the late 1980s and mid-1990s. Orlov’s article Closing the ‘Collapse Gap:’ The USSR Was Better Prepared for Collapse than the US was very popular at energybulletin.net. If you want to contact me directly, my address is my first name – dot – my last name, at gmail.com. No spam, please.