[Nobel Economics Laureate] Joseph Stiglitz on the Trans Pacific Partnership: “This Is a Big Deal”

Alexandros Orphanides – In These Times 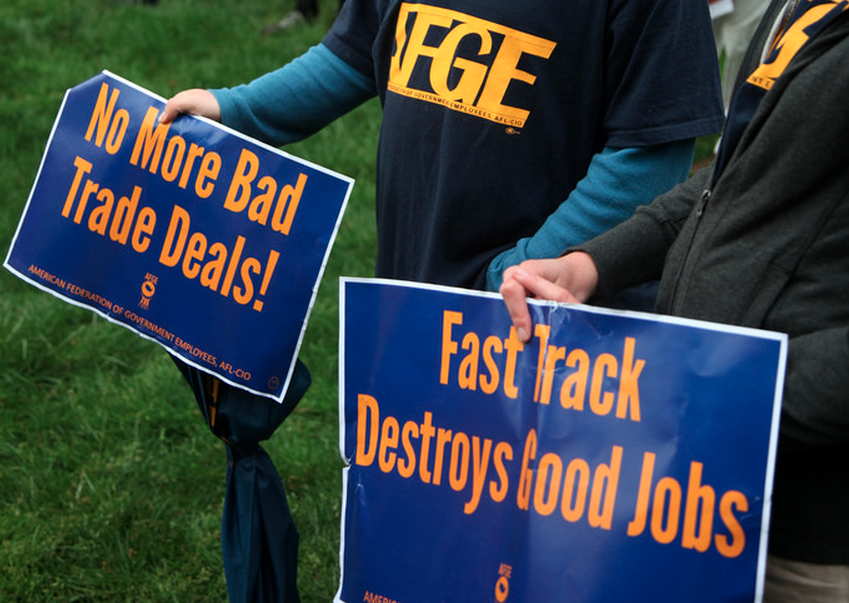 Members of the American Federation of Government Employees rally against the TPP in May 2014. (AFGE / Flickr)

12 Mar 2015 – Trade agreements are about more than business—they’re about who has final say in the way people around the world live, what they eat, how much they are paid, what medicines they can buy and whether they have jobs. Such agreements shape economic policies that impact billions of people. The discussions surrounding these agreements are far too important to done in secret. But that’s precisely how the Obama administration is trying to pass the Trans Pacific Partnership (TPP).

The TPP is a massive trade agreement between the United States, Canada, Chile, Australia, Brunei Darussalam, Malaysia, Mexico, New Zealand, Peru, Singapore and Vietnam. Observers like Miraya Solis, a senior fellow at the Brookings Institute, have called it “the most ambitious trade initiative pursued by the Obama Administration.”

Proponents of the TPP argue that the agreement will encourage global economic integration, increase U.S. competitiveness in a “dynamic Asia region” and stimulate political reform leading to more “open” markets. All this, they claim, will result in better jobs, wages and products.

Critics of the agreement say it amounts to the promulgation of corporate globalization and neoliberalization and have likened it to “NAFTA on steroids.” In a recent interview in Salon, Noam Chomsky described the TPP’s aims as to “maximize profit and domination and to set the working people of the world in competition with one another, to lower wages and increase insecurity, … [and] to protect at the same time … the top wealth sector.”

In spite of its significance, the mainstream media has not provided little coverage of the TPP. “It’s one of those issues that is deliberately obscured by its proponents,” Dan Cantor, National Director of the Working Families Party, says. “When people get a clear explanation, it’s like a lightbulb goes off in their head.”

The Community Meeting With Joseph Stiglitz

The Working Families Party of New York has expended considerable effort organizing in Jackson Heights, a diverse, largely immigrant section of New York City, to pressure local Rep. Thomas Crowley. Crowley is a very influential Democrat on the Ways and Means committee who has been evasive about which way he will vote on the issue. According to Cantor, similar efforts to convince reticent politicians of the agreement’s dangers have been strong nationwide. In Oregon, the WFP has been working to persuade Senator Ron Wyden, a Democrat who has historically supported free trade agreements, to “shift his position” on the issue.

Labor unions, community organizations and Nobel laureates don’t often share a public school auditorium, but that was precisely the constellation of characters that gathered on a recent Wednesday night at P.S. 69 in Jackson Heights to discuss the potential ramifications of the TPP, which is slated for congressional fast-tracking.

Around 400 people attended the community meeting, organized by a variety sponsors, including the WFP, Make the Road New York, Communications Workers of America (CWA), Terraza 7 (a local bar and community space) and others. The crowd of unionized workers, small business owners, activists and local residents filled the elementary school auditorium to discuss the implications of the trade agreement and hear Joseph Stiglitz’s remarks on the agreement. Within the economics discipline, Stiglitz, a Nobel Prize winner in economics and Columbia University professor, has been one of the TPP’s most outspoken critics.

“One of the reasons you should know [the TPP] is important is that they’ve tried to get it passed without anyone knowing about it,” Stiglitz began. “And that should make you suspicious.” The bill’s backers “always say … they’re going to create jobs. If that were really true, you’d expect the unions that represent the workers [affected by the bill] to be all in favor of it.”

Alluding to the 2008 financial crisis, he continued, “The people that are in favor [of TPP] are the people in Wall Street.”

Calling on community organizations and unions to ramp up the pressure, he explained that U.S. Trade Representative Michael Froman, an appointed government official responsible for negotiating the agreement, “comes from Citibank and does not represent workers or typical Americans—he represents a group of special interests. And that’s why the only way it is going to be defeated is if there is an outpouring of concern and … action.”

A fundamental component surrounding the TPP debate is the process by which the Obama administration is trying to have it approved called fast tracking, a procedure for Congressional approval of international trade treaties. Unlike the standard procedure to pass a bill, by which members of Congress debate and deliberate on specific provisions, fast tracking allows Congress to vote “up” or “down” on the trade agreement without making any amendments or opening any of the specific provisions.

While advocates of fast track argue that the process provides the president with a necessary strong mandate when negotiating international agreements, Stiglitz found that mandate problematic. “There is a great deal of secrecy.” The U.S. trade representative hasn’t allowed some members of Congress to review the deal’s content.

“It’s much worse than a blank check about trade,” Stiglitz said, “because the trade agreement has provisions that would affect a whole set of regulations that would affect the environment, worker safety, consumer safety and even the economy.” TPP “would not only become the law of the land, but every other law would have to adapt to it … and our Congress would have given up all authority in those areas.

“What are they trying to hide?” he asked.

Without naming names, Stiglitz explained that members of the business community have been privy to the agreement and have negotiated on the behalf of private interests rather than the public good.

Academics, he said, generally see it differently “even among those who were earlier supporters of free trade. … There is an increasing recognition that today in the American economy, … we are in a situation where the job-destroying aspects of these agreements is assured to be greater than job-creating aspects.”

He explained that the content of the TPP does not emphasize the traditional concepts of trade agreements, such as lowering tariffs and increasing imports or exports. Instead, the TPP seeks to undermine regulations in sectors like food safety, medicine and intellectual property, rendering governments and the citizenry that elects them inept in their ability to meaningfully regulate those sectors. By entangling such provisions with an agreement on international trade, the Obama administration would open up sovereign countries to unprecedented levels of interference by multinational corporations.

As a cautionary example, Stiglitz contended that countries which had been ravaged by globalization, seeing massively expanding inequality like Brazil and India, refused to join the trade agreement.

At the conclusion of the speech, audience members asked about the mainstream media’s silence on the agreement and the TPP’s potential impact on the environment. He opined that the media coverage would likely increase as the decision drew nearer, but emphasized the role that organized mobilizations could play in increasing visibility. On the environment, Stiglitz explained that the regulatory clauses in agreement could be disastrous as countries would lose the ability to regulate multinationals in sectors that could adversely impact profits.

After the event the room was abuzz with conversation. Reggie Pierre Louis, a member of the CWA, told In These Times, “This deal is going to destroy the fabric of American workers, the spirit of what’s supposed to be a democratic nation.”

Asked whether he worried about the implications of the TPP for him personally, he remarks, “Potentially, because once they start with this, who knows what’s next. How does this protect us from corporate greed and corporate malfeasance?”

Mala Huacuja del Toro was at the meeting with Somos Los Otros New York, an organization that grew out of the reaction to the recent mass murder of Mexican students.

“We fought NAFTA and we lost. Our lives changed completely; millions of Mexicans were forced to sell their lands and escape to urban places controlled by organized crime or to cross the border and become cheap labor in the U.S,” she says. These agreements help neither the Mexican people nor the U.S. people. And they are not represented by the people because they are signed in secret.”

Sounding optimistic about the potential to stop the TPP during a phone call several days after the event, the Working Families Party’s Cantor says, “I feel we’re up against the strongest actors in the world capitalist system, but they don’t actually have popular support. We’ve got a real chance to block this.”

Alexandros Orphanides is a New York City-based freelance journalist, researcher and teacher of Greek-Cypriot and Honduran descent . He writes on political, social and cultural issues with an emphasis on marginalized communities.