20 Mar 2015 – The U.S and European Union may want to save Crimeans from themselves. But the Crimeans are happy right where they are.

One year after the annexation of the Ukrainian peninsula in the Black Sea, poll after poll shows that the locals there — be they Ukrainians, ethnic Russians or Tatars are mostly all in agreement: life with Russia is better than life with Ukraine.

Little has changed over the last 12 months.  Despite huge efforts on the part of Kiev, Brussels, Washington and the Organization for Security and Cooperation in Europe, the bulk of humanity living on the Black Sea peninsula believe the referendum to secede from Ukraine was legit.  At some point, the West will have to recognize Crimea’s right to self rule. Unless we are all to believe that the locals polled by Gallup and GfK were done so with FSB bogey men standing by with guns in their hands.

In June 2014, a Gallup poll with the Broadcasting Board of Governors asked Crimeans if the results in the March 16, 2014 referendum to secede reflected the views of the people.  A total of 82.8% of Crimeans said yes.  When broken down by ethnicity, 93.6% of ethnic Russians said they believed the vote to secede was legitimate, while 68.4% of Ukrainians felt so. Moreover, when asked if joining Russia will ultimately make life better for them and their family, 73.9% said yes while 5.5% said no. 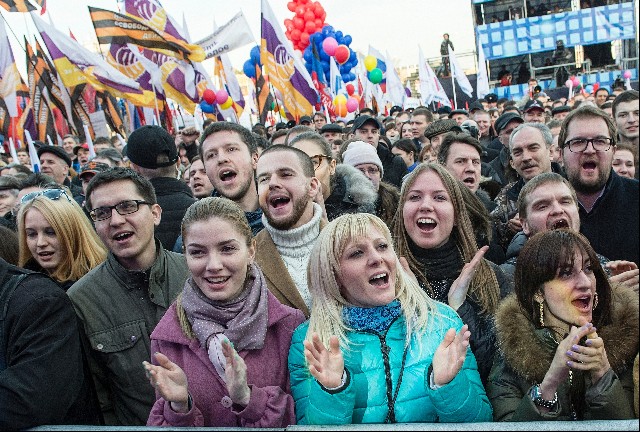 In February 2015, a poll by German polling firm GfK revealed that attitudes have not changed. When asked “Do you endorse Russia’s annexation of Crimea?”, a total of 82% of the respondents answered “yes, definitely,” and another 11% answered “yes, for the most part.” Only 2% said they didn’t know, and another 2% said no. Three percent did not specify their position.

With two studies out of the way, both Western-based, it seems without question that the vast majority of Crimeans do not feel they were duped into voting for annexation, and that life with Russia will be better for them and their families than life with Ukraine. A year ago this week, 83% of Crimeans went to the polling stations and almost 97% expressed support for reunification with their former Soviet parent. The majority of people living on the peninsula are ethnic Russians.

The U.S. made a big deal about the rights of ethnic minorities there known as the Tatars, which account for around 10% of the population.  Of the 4% total that said they did not endorse Russia’s annexation, the vast majority — 55% — said that they feel that way because they believe it should have been allowed by Kiev in accordance with international law. Another 24% said the referendum vote was “held under pressure”, which means political or military threats to vote and vote in favor. 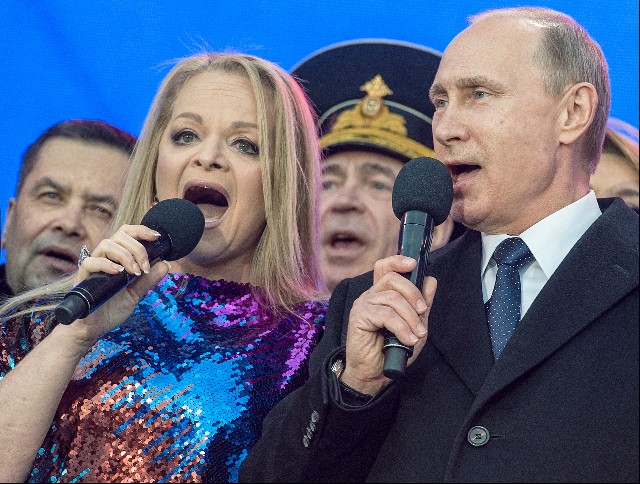 For now, the Gallup and GfK polls show a deeply divided Ukraine. The division of political allegiances ultimately threatens Ukraine’s territorial integrity. Only 19% in the east and 26.8% in the southeast think Ukraine should join the European Union, while 84.2% in the west believe Ukraine is a natural fit with the E.U..  Nearly 60% in the north agree that E.U. is the place to be, and just under half in the center part of the country want E.U. integration.

NATO integration is even less supported in the southeast and east, and a little over a third in the center and north agree that Ukraine should join the Western military powers. In the west, that number rises to 53%.

Those numbers also coincide with Ukraine’s trust or distrust with Washington. The pro-integration west, north and center portions of Ukraine all view the U.S. role in the crisis as mostly positive.  Well under a third say so in the east and southeast, and almost no one, including the Tatars, believe so in Crimea, GfK poll data suggests.

Interestingly enough, despite Russia’s involvement in the separatist movement in eastern Ukraine, only 35.7% of people polled there said they viewed Russia’s involvement as mostly positive while 71.3% of Crimeans were more in line with Russia’s world view, according to the year old poll from Gallup.

Kenneth Rapoza – I’ve written about Brazil pre-Lula and post-Lula and spent the last five years covering all aspects of the country for Dow Jones, Wall Street Journal and Barron’s. Meanwhile, for an undetermined amount of time, and with a little help from my friends, I will be parachuting primarily into Brazil, Russia, India and China. But will also be on the lookout for interesting business stories and investing ideas throughout the emerging markets.