Slavoj Žižek: A Note on Syriza – Indebted Yes, but Not Guilty! 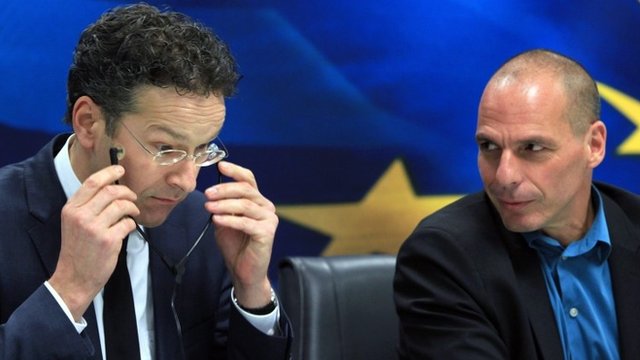 Jeroen Dijsselbloem and Yanis Varoufakis at a press conference

The idea one gets from our media is that the Syriza government in Greece is composed of a bunch of populist extremists who advocate “irrational” and “irresponsible” populist measures. Nothing can be further from the truth. It is, on the contrary, EU politics which have been, and continue to be, obviously irrational. Since 2008, Greece has been forced to enact tough austerity measures to put its finances in order; yet today, seven years later, after the country suffered a terrifying setback, Greek finances are in an even greater disorder. Indeed, the country’s debt rose from slightly above 100% of GDP to around 175%, now standing at 320 billion euros. If this is not irrational, then this word has no meaning whatsoever. Why, then, is the EU doing this to Greece?

As we all know, EU policy towards heavily indebted countries like Greece is one of “extend and pretend” – extending the payback period, but pretending that all debts will eventually be paid. So why is the fiction of repayment so stubborn? It is not just that this fiction makes debt extension more acceptable to German voters; nor is it that the eventual write-off of the Greek debt may trigger similar demands from Portugal, Ireland, and Spain. The true reason is simply that those in power do not really want the debt to be fully repaid. The true goal of lending money to the debtor is not to get the debt reimbursed with a profit, but rather the indefinite continuation of the debt that keeps the debtor in permanent dependency and subordination. A decade or so ago, Argentina decided to repay its debt to the IMF ahead of time (with the financial help from Venezuela), and the reaction of the IMF was surprising: instead of being glad that it got its money back, the IMF (or, rather, its top representatives) expressed their worry that Argentina would use its new freedom and financial independence from international financial institutions to abandon tight financial policies and engage in careless spending… Debt is an instrument to control and regulate the debtor, and as such, it strives for its own expanded reproduction.

The ongoing EU pressure on Greece to implement austerity measures fits perfectly what psychoanalysis calls the superego. The superego is not an ethical agency proper, but a sadistic agent, which bombards the subject with impossible demands, obscenely enjoying the subject’s failure to comply with them. The paradox of the superego is that, as Freud saw clearly, the more we obey its demands, the more we feel guilty. Imagine a vicious teacher who assigns his pupils impossible tasks, and then sadistically jeers when he sees their anxiety and panic. This is what is so terribly wrong with the EU demands/commands: they do not even give Greece a chance – Greek failure is part of the game.

As if they did not suffer enough, the Greeks are victims of a campaign which mobilizes the lowest egotist instincts. When they talk about writing off part of the debt, our media present this as a measure which will hurt ordinary taxpayers, pitting the lazy and corrupt Greeks against the hard-working ordinary people in other countries. In Slovenia, my own country, those who sympathize with Syriza were even accused of national treason… So when, back in the 2008 financial breakdown, big banks became insolvent, it was okay for the state to cover their losses by spending trillions (of taxpayer money, of course), but when a whole people finds itself in misery, the debt should be paid.

How are we to step out of this infernal circle of debt and guilt? The Syriza government did it. The debt providers and caretakers of debt basically accuse the Syriza government of not feeling enough guilt; it is accused of feeling innocent. That is what the EU establishment finds so disturbing about the Syriza government: it admits debt, but without guilt. Syriza got rid of the superego pressure. The Greek finance minister Yanis Varoufakis personifies this stance in his dealings with Brussels and Berlin: he fully acknowledges the weight of the debt, and he argues quite rationally that, since the EU policy obviously did not work, another option should be found. Paradoxically, the point Varoufakis and Tsipras repeatedly make is that the Syriza government is the only chance for the debt providers to get at least part of their money back. Varoufakis himself wonders about the enigma of why banks were pouring money into Greece and collaborating with a clientelist state, all while knowing very well how things stood. Greece would never have become so heavily indebted without the connivance of the Western establishment. The Syriza government is well aware that the main threat does not come from Brussels. Rather, it resides in Greece itself – a clientelist corrupted state if there ever was one. What Europe (the EU bureaucracy) should be blamed for is that, while it criticized Greece for its corruption and inefficiency, it supported the very political force (New Democracy) which embodied this corruption and inefficiency.

For this reason, the main task of all true Leftists today is to engage in pan-European solidarity with Greece, and not only because Greece’s fate is in the hands of Europe. We from Western Europe like to look upon Greece as detached observers following the plight of the impoverished nation with compassion and sympathy. However, such a comfortable standpoint relies on a fateful illusion. What goes on in Greece these past weeks concerns all of us – the future of Europe is at stake. So when we read about Greece these days, we should always bear in mind that, as the old saying goes, de te fabula narratur.

Leftists all around Europe complain how today no one dares to really disturb the neoliberal dogma. The problem is real, of course: the moment one violates this dogma, or rather, the moment one is just perceived as a possible agent of such disturbance, tremendous forces are unleashed. Although these forces appear as objective economic factors, they are effectively forces of illusions, of ideology. But their material power is nonetheless utterly destructive. Today we are under the tremendous pressure of what we should call “enemy propaganda.” Let me quote Alain Badiou: “The goal of all enemy propaganda is not to annihilate an existing force (this function is generally left to police forces), but rather to annihilate an unnoticed possibility of the situation.” In other words, enemy propaganda tries to kill hope: the message of this propaganda is a resigned conviction that the world we live in, even if not the best of all possible worlds, is the least bad one, so any radical change could only make it worse.

Somebody has to make the first move and cut the Gordian knot of neoliberal dogma. Indeed, let us not forget that those who preach this dogma – from the US to Germany – violate it freely when it suits them. Syriza’s struggle reaches far beyond a simple struggle for welfare. It is the struggle for an entire way of life, the resistance of a world threatened by rapid globalization or, rather, of a culture with its daily rituals and manners, which are threatened by post-historical commodification. Is this resistance conservative? Today’s mainstream self-declared political and cultural conservatives are not really conservatives. Fully endorsing capitalism’s continuous self-revolutionizing, they just want to make it more efficient by supplementing it with some traditional institutions (religion, etc.) to contain its destructive consequences for social life and to maintain social cohesion. A true conservative today is one who fully admits the antagonisms and deadlocks of global capitalism, one who rejects simple progressivism, and is attentive to the dark obverse of progress.

This is why I profess a deep respect for Syriza’s struggle. The very fact that they persist makes us all free: we all know that as long as Syriza is there, there is a chance for all of us.