24 Mar 2015 – In what has undoubtedly been a tumultuous year for the world and for the country itself, Brazil took over the Presidency of the BRICS and hosted the sixth BRICS Summit since the group of emerging economies formalized its existence in 2009. Much of the recent focus on the BRICS has centered on institutional developments, not least among which is the creation of the BRICS Development Bank – the New Development Bank – and the Contingent Reserve Arrangement (CRA). Less optimistic commentary has raised concern regarding the arguably uncertain future of the group’s economies, which have in the past year seen significant declines in their GDP growth rates – some, including Brazil, more so than others.

Yet, less has been written regarding the degree to which the Brazilian administration has capitalized on its Chairpersonship to promote key Brazilian foreign policy goals. It would indeed seem like a good opportunity to raise Brazil’s foreign policy profile, particularly since President Dilma Rousseff has faced a hard task in succeeding President Lula’s activist foreign policy. Rousseff, unlike her predecessor, has been criticized for giving less priority to foreign policy and for lack of voice in global security issues. 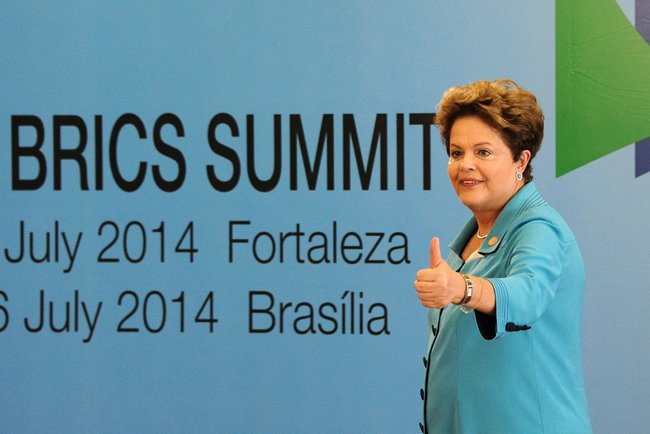 Forging stronger and more important trade and investment ties with the BRICS countries and their regions is undoubtedly among the priorities of the Brazilian government and has been since the inception of the group and since President Lula made the diversification of political and economic foreign relations a main pillar of his vision of an autonomous and assertive Brazil. But beyond that, chairing the BRICS throughout these past months, has also given Brazil the opportunity to instrumentalise its membership of the group for the promotion of longstanding practical and normative goals of its global and regional aspirations.

Brazil has long struggled with a balanced approach to its region. While keen on promoting integration, particularly for reasons related to trade and infrastructure development which also necessitate democratic stability, it has also repeatedly illustrated its reluctance to become a regional leader. Rather, it prefers to act as a bridge between the region and its “emerging power” partners. This was very successfully achieved by bringing together the leaders of UNASUR (the Union of South American Nations) and several of the leaders of CELAC (the Community of Latin American and Caribbean States) in the meetings organized during the BRICS Summit in Fortaleza in July.

As China is the key trade and investment partner for a growing number of South and Latin American countries, the opportunity to meet with the Chinese leader and to deepen the region’s ties with China because of Brazil’s BRICS identity, undoubtedly worked in favor of Brazil’s regional profile which has often suffered from criticisms of being given preferential treatment by global institutions (the lack of support of Brazil’s claim to a permanent seat in the UNSC is indicative of such tendencies).

It is also important to note that the BRICS bloc as a whole has become a key trading partner for some of the countries in the region, such as Venezuela, whose commerce with the bloc increased by 72% from 2006 – 2013.

All throughout the government of the Worker’s Party, since the first election of President Lula in 2002, development and south-south cooperation have been quintessential pillars of Brazil’s foreign policy rhetoric and practice.

Brazil, as other emerging countries, aspires to a reform of the traditional sources of financing for development and a departure from Western- dominated models in this field.

The BRICS Development Bank, announced at the Fortaleza Summit and established throughout the Brazilian presidency, creates opportunities for Brazil to be a more active player in the field of development, in spite of economic slowdown, while challenging the northern paradigm.

Brazil also sought to address development issues by including “growth with social inclusion” as one of the agendas set by the Brazilian Chairpersonship of the BRICS. In this area, the country capitalized in the promotion of its own success in improving income distribution through social spending in the past years, a model that Brazilian foreign policy seeks to “export” as one of the aspects of Brazilian normative power.

Brazil’s foreign policy is driven by the aspiration to reconstruct the global order – represented by the global institutional architecture – into one characterized by the equal and democratic participation of all states.

It envisions a multipolar order with dynamics which reduce hegemonic tendencies; new paradigms for development; the promotion of human rights. It also strongly endorsed the principles of state sovereignty and non-intervention in other states’ affairs, while acknowledging that difference between non-intervention and non-indifference.

The promotion of this vision on the global agenda leads to normative divergence with Western countries – mostly the US and Europe – and the established global institutions.

Looking back at the Brazilian Chairpersonship of the BRICS, we can identify a few symbolical acts of “counterweighing” the West. The BRICS opposition to US and EU sanctions against Russia and their insistence that the Russian President attend the G-20 Summit in Brisbane illustrated the existence of multiple voices in terms of approach towards the Russian-Ukrainian issue (and a caution towards sanctions which is characteristic of Brazilian foreign policy). 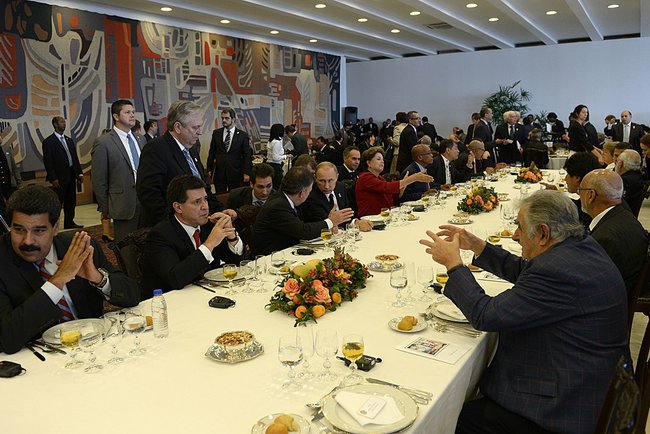 The establishment of the new bank and reserve fund challenged the monopoly of the existing institutional order (while not necessarily opposing it as has been rightly pointed out by Oliver Stuenkel) and further deepened the evolving identity of the group as a player in the international setting, one that is an outsider from various West-driven processes such as the ongoing mega-trade negotiations in the Pacific and the Atlantic.

A new BRICS MoU on Cooperation in Science, Technology and Innovation signed in Brasilia last week, may further institutionalize intra-BRICS cooperation in fields that are extremely important to Brazilian foreign relations, such as intellectual property rights regimes.

Brazil’s BRICS Chairmanship has been consistent with Brazil’s foreign pursuits and, among those, with the importance Brazil attributes to the BRICS. Yet, a big challenge that remains is to succeed in the balancing act of deepening ties with the BRICS, while repairing relations with the US and concluding unfinished trade arrangements with Europe, at a time where the Brazilian economy and politics are in desperate need of renewed vigor.