Destroying the Greek Economy in Order to Save It 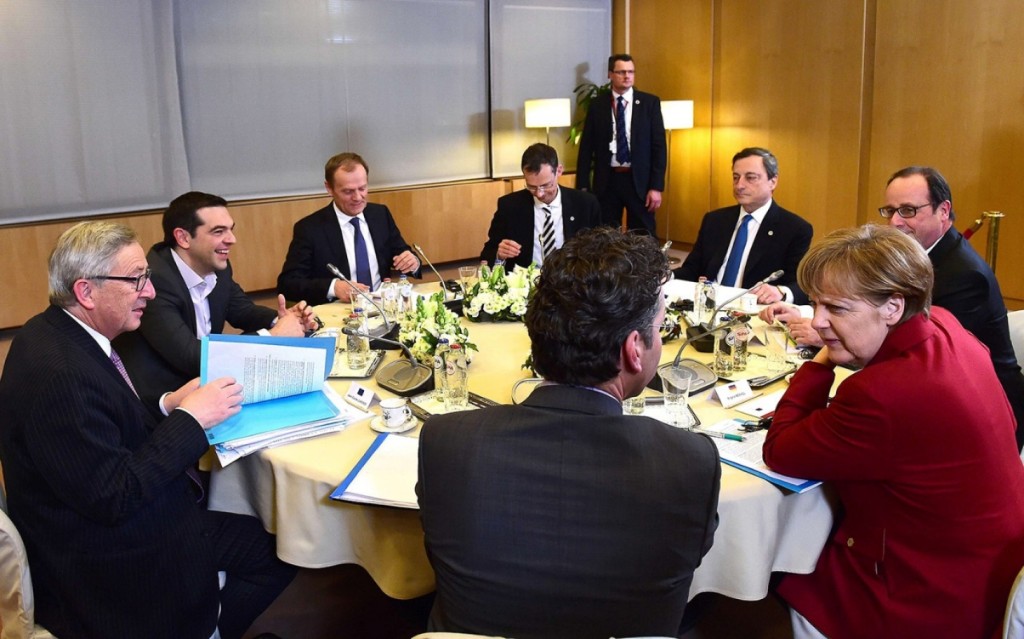 But blackmail is actually an understatement of what the troika is doing to Greece. It has become increasingly clear that it is trying to harm the Greek economy in order to increase pressure on the new Greek government to agree to its demands.

The first sign that this was the European authorities’ strategy came on Feb. 4 — just 10 days after the Syriza government was elected — when the ECB cut off the main source of financing for Greek banks. This move was clearly made in bad faith, since there was no bureaucratic or other reason to do this; it was more than three weeks before the deadline for the decision. Predictably, the cutoff spurred a huge outflow of capital from the Greek banking system, destabilizing the economy and sending financial markets plummeting. More intimidation followed, including a slightly veiled threat that emergency liquidity assistance, Greece’s last credit lifeline from the ECB, could also be cut. The European authorities appeared to be hoping that a shock-and-awe assault on the Greek economy would force the new government to immediately capitulate.

It didn’t work out that way. The Syriza party had a mandate from Greek voters to improve their living standards after six years of troika-induced depression and more than 25 percent unemployment. The new Greek government backed off its demand for a debt “haircut” and made other compromises but refused to surrender as if there had been no election. The European authorities finally blinked on Feb. 20 and agreed to grant a four-month extension, through June, of the prior “bailout” agreement. The quote marks are necessary because most Greeks have been not bailed out but thrown overboard, having lost more than 25 percent of their national income since 2008.

According to the immediate condition for the Feb. 20 agreement, the Greek government would present a list of reforms that it would undertake, which it did, and which European officials approved. Remaining issues were to be negotiated by April 20, so that the final installment of IMF money — some 7.2 billion euros — could be released. One might assume that the Feb. 20 agreement would allow these negotiations to take place without European officials causing further immediate and unnecessary damage to the Greek economy. One would be wrong: A gun to the head of Syriza was not enough for these “benefactors.” They wanted fingers in a vise too.

And they got it. The ECB refused to renew the Greek banks’ access to its main, cheapest source of credit that they had before the Jan. 25 elections. And it refused to lift the cap on the amount that Greek banks could lend to the Greek government — something that it did not do to the previous government. As a result, a serious cash flow problem has struck both the government and the banks. Because of the ECB’s credit squeeze, the government could soon find itself in a situation that the 2012 government faced when it delayed payments to hospitals and other contractors in order to make debt payments, and it could even face default at the end of April.

The amounts of money involved are quite trivial for the ECB. The government has to come up with approximately 2 billion euros of debt payments in April. The ECB recently shelled out 26.3 billion euros to buy eurozone governments’ bonds as part of its 850 billion euro quantitative easing program over the next year and a half. The ECB’s excuses for causing this cash crunch in Greece ring hollow. For example, it argues that banks under the previous government didn’t require the limit that the ECB is imposing on banks now because the prior government committed to a reform program that would fix its finances. But so has this one.

It could hardly be more obvious that this is not about money or fiscal sustainability, but about politics. This is a government that European authorities didn’t want, and they wish to show who is boss. And they really don’t want this government to succeed, which would encourage Spanish voters to opt for a democratic alternative — Podemos — later this year.

The IMF projected the economy to grow by 2.9 percent this year, and until the last month or so, there was good reason to believe that — as in 2014, after years of gross overestimates — its forecast would be on target. This growth would likely have kept Syriza’s approval ratings high, together with its measures to provide food and electricity to needy households and other progressive changes. The ECB’s actions, by destabilizing the economy and discouraging investment and consumption, will almost certainly slow Greece’s recovery and could be expected to undermine support for the government.

If carried too far, European officials’ actions could inadvertently force Greece out of the euro — a dangerous strategy for all concerned. They should stop undermining the economic recovery that Greece will need if it is to achieve fiscal sustainability.

Mark Weisbrot is a co-director of the Center for Economic and Policy Research in Washington, D.C. He is also the president of Just Foreign Policy.