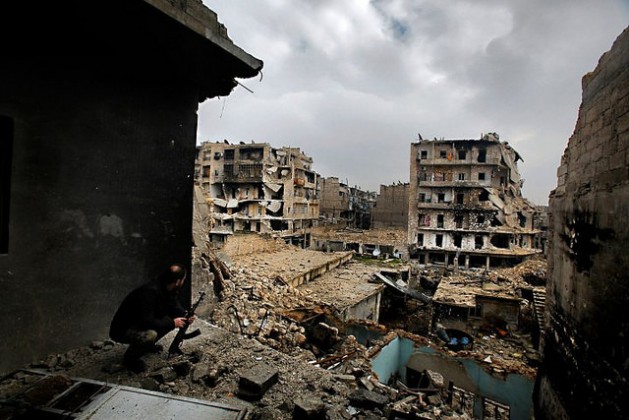 Abu Firuz, the commander of Liwa (Brigade) Salahadin, a Kurdish military unit fighting alongside rebel fighters, watches the besieged district of Karmel al-Jabl in eastern Aleppo, on Dec. 6, 2012. Several of the GCC states, specifically Saudi Arabia, UAE and Qatar, are significant suppliers of weapons, mostly unofficial and clandestine, to some of the warring factions in Syria, Libya, Iraq and Yemen. Credit: สังฆมณฑล เชียงใหม่/cc by 2.0

The ongoing conflicts in Syria, Iraq, Libya and Yemen have helped spiral arms sales upwards to the Middle East, according to a study released Monday [Mar 16 2015] by the Stockholm International Peace Research Institute (SIPRI).

The primary beneficiaries were the United States and Russia, whose overall arms exports show a marked increase through 2014, with China lagging behind, according to the latest figures.

Arms sales to Gulf Cooperation Council (GCC) states – Bahrain, Qatar, Saudi Arabia, Kuwait, Oman and the United Arab Emirates (UAE) – increased by 71 per cent from 2005–2009 to 2010–14, accounting for 54 per cent of imports to the Middle East in the latter period.

Saudi Arabia rose to become the second largest importer of major weapons worldwide in 2010–14, increasing the volume of its arms imports four times compared to 2005–2009.

Several of the GCC states, specifically Saudi Arabia, UAE and Qatar, are significant suppliers of weapons, mostly unofficial and clandestine, to some of the warring factions in Syria, Libya, Iraq and Yemen.

Pieter Wezeman, senior researcher at SIPRI’s Arms and Military Expenditure Programme, said GCC states have rapidly expanded and modernised their militaries – primarily with arms from the United States and Europe.

“The GCC states, along with Egypt, Iraq, Israel and Turkey in the wider Middle East, are scheduled to receive further large orders of major arms in the coming years,” he added.

Dr. Natalie J. Goldring, a senior fellow with the Security Studies Programme in the Edmund A. Walsh School of Foreign Service at Georgetown University, told IPS the ongoing conflicts in the Middle East and the former Soviet Union provide ready markets for arms transfers.

But those transfers, she pointed out, aren’t always reflected in the SIPRI data. SIPRI’s database focuses on major conventional weapons.

“This means that the light weapons and small arms often featured in recent conflicts are not captured in the SIPRI totals,” said Golding, who also represents the Acronym Institute at the United Nations on conventional weapons and arms trade issues.

She said the drop in crude oil prices since September 2014 reduces the revenues available to oil-rich nations.

According to the International Monetary Fund (IMF), the oil price cuts have had strong effects across the oil-producing nations because of their dependence on oil exports.

For the short term, those effects can be moderated by using the financial buffers that are available to countries such as Kuwait, Qatar, Saudi Arabia, and the UAE.

In the past, however, financial pressures have only slowed weapons acquisitions for as long as they have persisted, Goldring said.

“As the oil-supplier countries have recovered economically, they have resumed their arms purchases. Financial pressures are not an effective long-term control measure,” she noted.

These five countries accounted for 30 per cent of the total volume of arms imports worldwide.

India accounted for 34 per cent of the volume of arms imports to Asia, more than three times as much as China. China’s arms imports actually decreased by 42 per cent between 2005–2009 and 2010–14.

The new SIPRI data make it clear that the United States and Russia continue to dominate the global arms trade in major conventional weapons.

He said Asian countries generally still depend on imports of major weapons, which have strongly increased and will remain high in the near future.

Goldring told IPS that although SIPRI notes the significant percentage increase in Chinese exports between the two periods, China is still a minor supplier in comparison to the United States and Russia.

Even with a large increase in its exports, China still only accounts for five percent of the global trade.