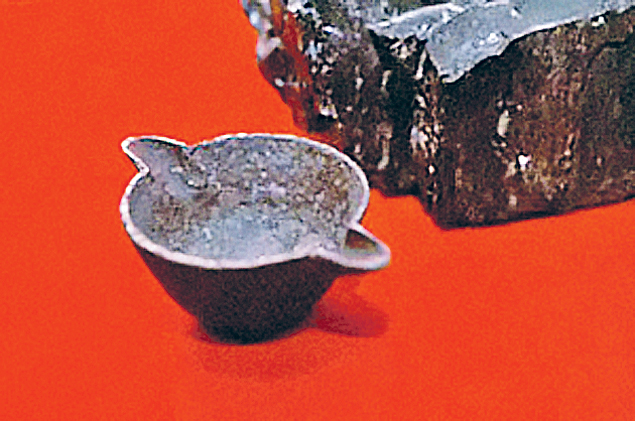 Apr 8 2015 – It’s a perfect piece of metal and it was discovered in 1912 in a mine in Wilburton, Oklahoma, its discoverer was Frank J. Kennard and according to him, it was found within a block of coal. But what makes this cup so mysterious? Well, as many other objects found across the world, the age of the artifact has caused debate.

Kennard, who was in 1948 a Benton Co worker, said: “While I was working in the Municipal Electric Plant in Thomas, Oklahoma in 1912, I came upon a solid chunk of coal which was too large to use. I broke it with a sledge hammer. This iron pot fell from the centre leaving the impression mould of the pot in the piece of coal. Jim Stall (an employee of the company) witnessed the breaking of the coal, and saw the pot fall out. I traced the source of the coal, and found that it came from the Wilburton, Oklahoma, Mines.”

The coal that originated from the mines of Wilburton, Oklahoma, is estimated to be around 300 million years old. This is where the story ignites and goes cold according to some.

Regrettably, the only evidence comes from the testimony of a person and that does not have much scientific rigor according to skeptics, besides, this object vanished like many others who had a similar story and similar age and apparently shared the same faith. If the object was found today, it would provide much more insight into the discovery, the origin of the item, who created it and what was the purpose, but most importantly it would shed light on its true age.

There is the theory regarding how an object like that might have ended up inside the coal, as the mines are filled with puddles of saturated water, eventually the water hardens and the object might have ended up inside the piece of coal. As noted by Mark Isaac: “The cup appears to be cast iron, and cast iron technology began in the eighteenth century. Its design is much like pots used to hold molten metals and may have been used by a tinsmith, tinker, or person casting bullets.”

The usual problems are seen in the discovery of this item, anecdotal evidence is basically the only thing we have, yet that does not explain how the artifact ended up embedded in the coal which is around 300 million years old. So as skeptics would say, no matter how certain Frank Kennard might have been at the time of his discovery, skeptics will provide dozens of alternative explanations regarding the item and how it ended up inside the coal. Not only for this item, but for many other items with similar age.

Of course, this might as well be a joke, but if it were a joke, wouldn’t it be already proven to be just that, a joke? Ancient alien theorist have a high regard when it comes to items like this, they are both mysterious, and challenge the typical views of history and archaeology. It seems that every time one of these items pops up, they are seen by archaeology and mainstream history as potential “enemies” since their true origin and age might challenge the conventional way, researchers look at history and civilization.