Situation Assessment of Yarmouk Refugee Camp: What Happens Next?

8 Apr 2015 – Sudden fighting broke out at the Yarmouk Refugee Camp (RC) in Damascus between groups affiliated to the Islamic State in Iraq and Syria (ISIS) and the Aknaf Bayt al-Maqdis—ABM (Environs of Jerusalem) group. Following the fighting, ISIS took control of nearly 80% of the RC area. While the Palestinian groups remain under siege by ISIS in the south and the regime in the north, the option to withdraw could be unlikely, meaning the Palestinian groups’ options boil down to reaching either settlement or engaging in a suicidal battle with ISIS or the regime.

The dramatic shift in Yarmouk RC, from a situation where the Palestinian forces had for two years sought to keep the camp neutral to a situation where it has become a flashpoint in the battle between the regime and the opposition, is likely to worsen the suffering of Palestinian refugees. It could also alter the dynamics of the battles between the opposition and the regime in the region of Damascus.

In early April 2015, sudden fighting broke out at the Palestinian Yarmouk RC between groups affiliated to ISIS and ABM. The already dire humanitarian situation at the RC has since worsened for about 15 thousand Palestinian civilians.

The Overall Situation in Yarmouk RC

December 16, 2012 is a memorable day in the life of the Palestinian refugees at the Yarmouk RC, the day the camp came under partial siege. Total siege followed several months later, after the Suqur al-Joulan group were expelled from Yarmouk RC. The group was affiliated to the Syrian opposition before joining forces with the regime, and there had been rumors that the group had in fact been always linked to the regime.

Suqur al-Joulan were expelled by a number of groups inside the RC, led by ABM, which consisted exclusively of Palestinians, the majority of whom were members or supporters of Hamas. Later, the situation on the ground developed in a way that led to two main groups controlling most of the RC, ABM and al-Nusra Front.

Since about 18 months ago, there have been many initiatives seeking to keep the RC neutral and end the siege, involving the Palestine Liberation Organization (PLO) and a number of other Palestinian factions and popular committees. However, all these initiatives failed.

Meanwhile, the Syrian regime refused to evacuate civilians trapped inside the RC, and allowed only a limited amount of aid to enter, sent by European convoys, United Nations Relief and Works Agency for Palestine Refugees in the Near East (UNRWA), and some local NGOs. The presence of civilians has led to a state of cautious truce between the regime and the opposition, which did not stand to gain from subjecting the RC to bombardment or act in a way that would deprive the RC from aid. It was also not in the regime’s interest to be accused of targeting Palestinian refugees.

This equation ensured a state of relative calm for about two years for the regime forces in al-Qa‘ah region overlooking the RC northern entrance, which is considered also the first flashpoint between the regime and opposition south of the capital. This could be one of the reasons why initiatives to keep the RC neutral had failed. To be sure, any settlement that would allow civilians the freedom of movement would remove this buffer zone, the RC, between regime and opposition lines south of the capital.

In the past five months (since late 2014), there has been a wave of assassinations inside the RC targeting figures and activists in many fields. They were all killed in a professional but mysterious manner, including activists affiliated to Fatah, Hamas, and other leading factions in the RC. The straw that broke the camel’s back was the assassination of Yahya Hournai (aka Abu Suhaib), former Hamas official in the RC, and a leading medical aid worker.

ABM accused ISIS in the nearby al-Hajar al-Aswad area of orchestrating the murder, based on a number of indications, following which the group detained ISIS members for investigation. This led ISIS to raid the RC and besiege the Diaspora Office, which is directly run by ABM, less than 24 hours later. ISIS quickly controlled most of the RC southern parts, which were under the control of al-Nusra Front, suggesting there had been a prior agreement between the two groups.

ABM clashed with ISIS in several parts of the camp. Over the 1st and 2nd of April, violent fighting took place at the flashpoint along Nouh Ibrahim Street, which divides the eastern RC nearly in half along with ‘Atta al-Zeer Street. On the third day, ISIS was able to advance, thanks to their large numbers (around one thousand fighters) and adequate armament, while al-Nusra Front prevented any reinforcements from entering the RC and advance in from the south.

As the ABM retreated to the northern part of the RC, forces from Fatah al-Intifadah backed by regime forces and the Popular Front for the Liberation of Palestine-General Command (PFLP-GC) advanced and seized an area in the north of the RC. This strengthened the presence of the regime along Palestine Street from the Municipality District to the Rujula Mosque, and tightened the siege on ABM, which by the end of the fighting on the fourth and fifth days, had retreated to a strip no longer than 400 meters.

This was accompanied by panic among the population, especially after ISIS beheaded two young men and dumped their bodies in the street, and with the spread of many rumors. This is while the humanitarian situation worsened as ISIS took control of the only water distribution point in Yarmouk RC, close to the Palestine Mosque, and as all attempts to bring in food aid were suspended by all organizations.

On the sixth day, ABM was able to rally a number of its members in the southern part of the RC and launch an attack, retaking the Cultural Center area and the hospital behind it. On the seventh day, a limited group of defected Palestinian Liberation Army troops led by Colonel Khalid al-Hassan attempted to provide support for ABM in the northern part of the RC, launching a counterattack against ISIS. Colonel Hassan was killed in the fighting. The situation as it now stands sees ABM under siege by ISIS and al-Nusra Front on one side, and the regime forces on the other.

In light of these developments, and the clear military advances made by ISIS, the future scenarios for the Yarmouk RC will be linked to the future of the armed groups there, as follows:

1. ABM continues to fight until the group runs out of ammunition. ISIS would advance and control the entire RC, and detain or kill surviving ABM members.

2. ABM re-takes the initiative, and advances into the RC’s depth and recovers it in full or in part.

3. ABM withdraws from the RC, which necessarily requires a settlement with one of the other sides given its situation on the ground. There are several possibilities for this withdrawal:

• A settlement with the Syrian regime to allow ABM to withdraw through regime-controlled areas into specific destinations, such as Khan al-Sheeh RC west of the capital, Tadamon neighborhood, or near Damascus Countryside or Dar‘a Countryside.

• A settlement with ISIS and al-Nusra Front to allow ABM pass through, in the direction of Yalda, Babila, and Beit Sahem suburbs south of the RC.

• Withdrawal without any settlement, whether with the regime or ISIS, in the direction of Tadamon neighborhood.

The scenarios of withdrawal look all unlikely in the event the first or second scenarios pan out. In addition, efforts for a deal with ISIS and al-Nusra Front have already failed, following negotiations in this regard. This is while the prospect of a deal with the regime to withdraw south needs brokers and strong assurances, as had happened in Homs for example, but none of this is available yet with the absence of an appropriate mediator, be it Palestinian factions or international parties. And although the issue of the Yarmouk RC has reached the UN Security Council, the discussions have centered on the humanitarian aspect, without adopting any initiative concerning the fighters.

Meanwhile, the option of withdrawal into Tadamon neighborhood without prior arrangements with either ISIS or the regime faces two main challenges:

First: The withdrawal requires military action to cover it. ABM group will have to pass through a dangerous area exposed to regime forces on one side and al-Nusra on the other side. With the predicted depletion of the group’s ammunition, and the difficult military situation of the area, this withdrawal appears closer to being a large gamble or even suicide.

Second: It requires the approval of opposition groups in the Tadamon neighborhood, which are certainly not interested in antagonizing ISIS in any way. In addition to this, the idea of withdrawal is not desirable to all Syrian opposition factions, as this would strengthen the regime or ISIS inside the Yarmouk RC. The same could be said of the regime, which does not want a withdrawal because this could turn the front line in Yarmouk to one with ISIS. This makes all withdrawal options unlikely, at least for the time being. In the event a withdrawal happens, it is most likely this would take place through a deal with the regime with Palestinian or international guarantees, similar to the withdrawal of the fighters from Homs nearly a year ago.

The most realistic scenario is that the ABM would re-take the initiative, rearm and resupply itself, with a view to seize back the RC or part of its northern area. The regime may not mind this, if this would mean restoring the status quo that had been in place for the past two years. Furthermore, the possibility of coaxing Ahrar al-Sham group, which controls an area in the western part of the Yarmouk RC, is also possible, in case its concerns regarding ISIS and al-Nusra Front were addressed. This could help alter the equation, which in any case, the cost would be prohibitively high.

Moreover, the RC’s future will be bleak, whether ISIS controls it in full, or in the event it is recovered in full or in part by the Palestinian groups, be it ABM or other factions loyal to the regime. The “price of location” will continue to bear on the RC until the crisis in Syria reaches a stable and permanent outcome, or major changes take place in the battlefield in southern Damascus. If ISIS remains in control of parts of the RC, the possibilities of some civilians leaving could increase, as the justification for using this card could become invalidated, in light of ISIS’s indifference to the popular element (given its vision and the way it handles matters, and the fact that most of its members are not Palestinians). 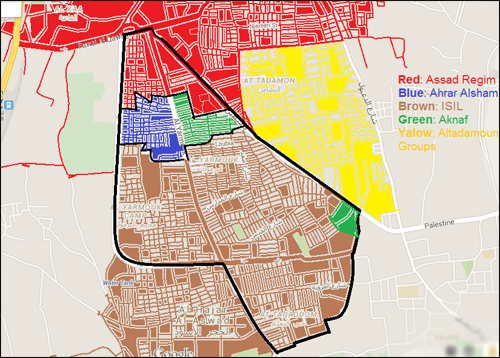 Al-Zaytouna Centre would like to thank Tariq Hammoud for contributing to the preparation of the draft upon which this assessment has relied.