The role of the media in war and conflict has for a long time been an important part of media research, partly as a result of humanitarian consequences but also because of its inherent political and economic importance on a global level. The impact of radio World War I, television journalism mediating the Vietnam War and the role of social media during the recent uprisings in the Arab world, are all examples of how the media in different ways and to varying degrees, have played a vital part in discourses surrounding wars and conflicts. But how do the news reporting from conflicts correspond with reality, and with the way people perceive the world order? 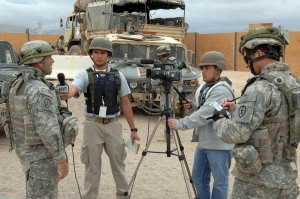 The period after the Cold War ended, usually referred to as the time when Western liberal democratic ideals would go global and world peace would characterize the end of a tumultuous century. But what was overlooked in this optimism was the highly complex internal conditions in states and regions that failed to float with the tide of neo- liberalization and become part of the impending globalization processes. Instead, they were characterized by fierce internal strife, civil war and military conflicts based on ethnic or religious differences. During the the last decade of our former century, according to the Stockholm International Peace Research Institute, there were 57 major armed conflicts in the world, and only three of them were between states (Iraq/Kuwait, India/Pakistan and Eritrea/Ethiopia). The rest consisted of internal conflicts within countries (SIPRI 2002). And these conflicts are complicated to understand, both for us and for journalists. There are for example those with clear geo-strategic and economic interests (such as the Iraq war as a battle between oil interests), there are conflicts based on national and ethnic interests (such as the war on the Balkans in the late 1990s), and there are invisible conflicts (eg Sudan and Darfur) that are not visible on the international news agenda, which rather often is dominated by conflicts in which the U.S. is involved in the role of liberator and peacemaker. And it’s these invisible conflicts that I would like to discuss.

Distortions in the news coverage of conflict favouring Western interests are palpable, and there are several books on the subject. One of the most interesting I have encountered is Virgil Hawkins ‘ Stealth Conflicts ‘ (2008), a book which, incidentally, seems to have been overlooked in the academic field. Hawkins develops a clear and harsh criticism against the established media’s foreign coverage in general, and news coverage of conflicts in particular. He emphasizes how we often attribute the global information society (the amazing flow and amount of free information) in a purely positive sense, but in fact, the information often lacks diversity, variety or critical depth. Rather the information is redundant, especially journalistic news reporting. The latter is something that Jonathan Stray also noted in an intriguing article for the Nieman Journalism Lab where he studied 800 Web articles about the same event. It turned out that ALL but 121 were identical, 13 contained at least one personal/unique quote and only 7 were based on original journalistic work. The conclusion is that all the other articles are results of pure depreciation/rewrites of other journalists, without even having to leave the editorial office.

Hawkins book also points out the relationship between what we think/know about the world’s conflicts and what/how the media actually reports. Among other things he shows a chart that lists the major conflicts (in death tolls) in recent years. The ranking of the conflict really exhibits the difference from priorities in news value that most western media companies represent. For example: what do you think is the conflict from its inception in 1998 has had over five million dead, has had involvement of military forces from nine countries and played out in an area the size of Western Europe, but few in the West even noticed?

The answer is Congo-Kinshasa (Democratic Republic of Congo) and in view of the huge number of dead, the conflict is one of the two largest since World War II.

(And the second of the two major conflicts since 1945? Many would answer Vietnam, perhaps considering the huge amount of pop-cultural references to the mythical Vietnam War, but no, it is actually the Korean War)

Countries and conflicts following the Congo Kinshasa in Hawkins study include Sudan, Angola, Rwanda, Afghanistan, Somalia and Iraq. And at the very last scene, which also emphasizes Hawkins argument, comes the Israeli-Palestinian conflict.

This is the conflict that for long have had a privileged place in newspapers, tv-reports and opinion pages. I would argue that it is, with brief interruptions, by far the most commented war reporting in western media. And the symbolic power of journalism around conflicts is hard to argue against, especially when reading a 2003 study conducted among university students in Australia, where an overwhelming majority of respondents thought that Israel- Palestine was the world’s deadliest conflict.

According to Hawkins, the media has failed in its dual role: they act neither as a reliable mirror of reality or as a watchdog over stakeholders and powers. 88 percent of the world’s conflict-related deaths after World War II have occurred in Africa (6 percent in Asia, 4 percent in the Middle East) but the priorities of news media institutions seem almost the exact opposite.

There is thus a great need to discuss the news coverage that comes out of conflicts, but above all what is not visible in the mainstream war journalism.